Colonel Allensworth State Historic Park is a great place to visit if you are looking for a quick California day trip. It's a place to step back in time and see the remnants of a once thriving community. Located just off Highway 43, and along the Southern Pacific/Amtrak tracks, this now ghost town, turned state park, is about forty minutes north of Bakersfield.

Colonel Allensworth State Park is located between Bakersfield and Fresno 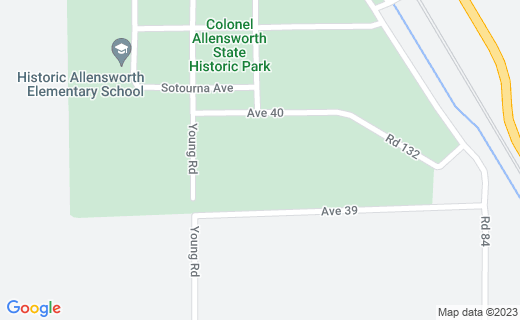 The Town is Created

On August 3, 1908 a town created specifically for African-Americans by African Americans, was built just off the Southern Pacific Line. The land was purchased from a local white businessman who was charging Allensworth and his partner twice what he charged whites for similar land in nearby communities.

This land was said to be more valuable because of the three Artesian wells which were just below the surface. The wells were valuable for their contribution to crop production and animal husbandry. In addition, settlers would of course require water for their own consumption.

Some of the structures

Colonel Allensworth was inspired to pursue the town in order to create opportunity for blacks in America because he was denied education opportunities.

The separate but equal practices which were inspired by the 1896, Plessy v. Ferguson decision, managed to hinder the efforts of many African Americans achieve equality. One of the ways that slaves were held down was to maintain illiteracy. A slave who could read was considered dangerous because knowledge is power.

Born in 1842 in Kentucky, Allensworth learned to read as a young man and at the age of 12 was sent because he learned how to read the Bible.

Allensworth served in the Civil war where he became a Minster and eventually a Military Chaplain in 1886. He retired with the rank of Lt. Colonel in 1906, becoming the highest ranking black officer in the country.

The Town of Allensworth

Allensworth met Professor William Payne, who shared his vision for creating a town where blacks could realize equality. Together they formed the California Colony and Home Promotion association and in 1908 acquired the 800 acres which would eventually become the town of Allensworth.

A July 29, 1909 article in the Tulare County Times proclaimed "Negro Colony at Solita Prosperous". Much of the media attention to this community was positive and supportive.

Schools were built, businesses created and a hotel that catered to new residents and out of town visitors passing through. The location to the Sante Fe railroad was an asset to the community because it made the area accessible to travelers and as a place of commerce.

By 1913, water began to become a problem and by 1914, the water table had lowered considerably.

The railroad also moved the main stop to the nearby town of Allpaugh in 1914. The same year, Allensworth eventually passed away as he was preparing a speech for a congregation in Monrovia. He was struck by a motorcycle while crossing the street. The driver and the passenger were never charged.

After the Colonel's death, the town found it hard to recover. Economic turmoil after World War I inspired many people to leave the town. In the 1960s there was arsenic discovered in the water supply and by 1973, the town was scheduled for demolition.

Have you visited this place?

Allensworth became a State soon after and much work has been done to preserve the houses and buildings of this once busy town.

Annual events are held to celebrate the dream of Colonel Allensworth and the park attracts as many as 70,000 visitors annually.

It is great for a day trip getaway. There is camping and grills for cooking.

For information concerning special events see the website below: