The Colonial Arcade and Historic Hotel

Second in reputation behind Cleveland’s premier Arcade of 1889 (which runs between Superior and Euclid Avenues), the Colonial Arcade was constructed less than decade later, in 1898. It was originally conceived to anchor The Colonial Hotel and to connect the bustling mercantile street of Euclid Avenue with the Colonial Hotel's primary entrance on Prospect Avenue. The Colonial Arcade was designed in Georgian Revival styling by architect George Smith, who had also previously assisted in the Arcade’s design.

The Colonial Hotel enveloping the Colonial Arcade was redeveloped in 2000 to incorporate a Residence Inn by Marriott and an improved mix of food service and convenience retail establishments.

Hewing to the original design theme of the Colonial Hotel, The Knife and Fork Restaurant, a long-time arcade tenant, was appreciated for its Colonial American atmosphere and cuisine. However, considering the structure's age, vintage and namesake, the interior of the two-story retail Colonial Arcade actually appears quite crisp and sleekly modern in its strict geometry and block-long prismatic skylight.

The Residence Inn by Marriott consists of 175 spacious suites (with full kitchens) on 7 floors. An appreciable amount of conference space is available among 5 meeting rooms. Room stays typically include complimentary buffet breakfasts and evening socials. Pets can also stay with their owners. Shopping facilities throughout the structure and those adjacent offer convenience and service to the Inn's guests. 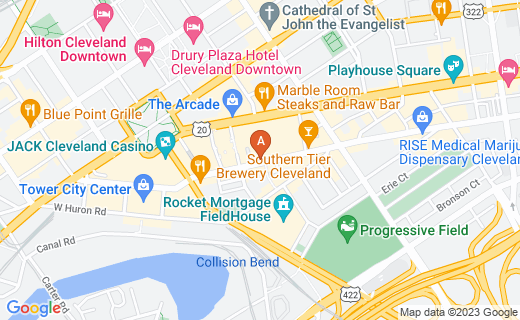 The $60 million redesign and redevelopment of the Colonial Arcade and its environs that brought Marriott's Residence Inn into the fold in 2000 not only added added a food court and additional retail space to serve guests, but also established a connection to yet another local landmark, the nearby Euclid Arcade. The Colonial Arcade and the Euclid Arcade are now often jointly referred to as the 5th Street Arcades.

An early motto of the 1898 Colonial Hotel was “the pathway of welcome leads to our doors”. Considering the nature of most Cleveland winters (and sometimes its falls and springs as well), the interconnected Colonial and Euclid Arcades clearly offer a pathway of welcome to bundled and besieged Cleveland pedestrians.

Due to its proximity to bustling East 4th Street and the nearby Jack Casino, Progressive Field and Rocket Arena, the Residence Inn and its Colonial Arcade partake of the burgeoning tourists and travelers to Cleveland's downtown core.