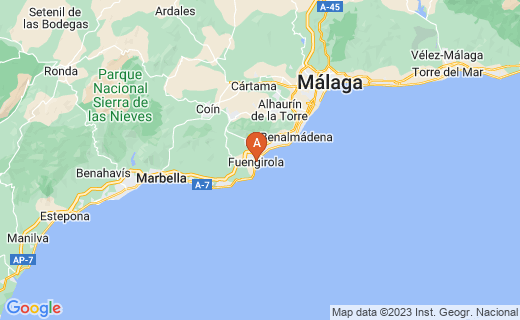 I arrived at the airport at 4:30 am after parking at an off-airport parking complex and being transferred by bus to the terminal. I marvelled at the chaos which Luton Airport had managed to create at the expense of its customers. After queuing for customs where I was beeped a few times because I had nuclear paper tissues in my pocket I made it to the shopping hall where I had coffee and a bite to eat. Our flight left on time and after an uneventful flight landed in Malaga.

I was met at the airport by the representative of All in Cars who took me to my car rental. I had ordered a Fiat 500 but they kindly upgraded me to a people mover, a sort of semi-van which proved to be very difficult to fit into parking bays but was great to drive.

At 12:45 I set off for Fuengirola along the coast road at a leisurely pace and arrived at the hotel The El Cid at around 3pm. The hotel had themed all its rooms and I had landed the Lorca Room which had a big picture of Lorca on the outside of the door as well as another inside the room. Along one wall was a huge mural of Manhattan with one of Lorca’s poems written over it.

After unpacking and refreshing myself I went out to explore Fuengirola. Near to the hotel was Constitution Square and when I arrived there I saw hundreds of men carrying all shapes and sizes of guitars and wearing knickerbockers with tunics in a whole variety of colours. I later learned that the colours represented Spanish universities with each university represented by a specific colour. A group of men from each university sometime during the evening got up onto a stage that had been erected in the square, to sing traditional Spanish songs.

After breakfast, I took the car and motored down the coast towards Estepona a small town on the coast that had a modern frontage but a picturesque old town. I spent the day there walking along the front and exploring the old part of the town. For lunch, I ate at a restaurant owned by an Englishman who had spent the last 27 years in Spain. His restaurant was called Baileys after the owner. In the afternoon, I drove back to Fuengirola along the motorway AP7 passing Marbella on the way. That evening, I went back to Constitution Square to listen to the knickerbocker men and had a déjà vu dinner at La Plaza once again. 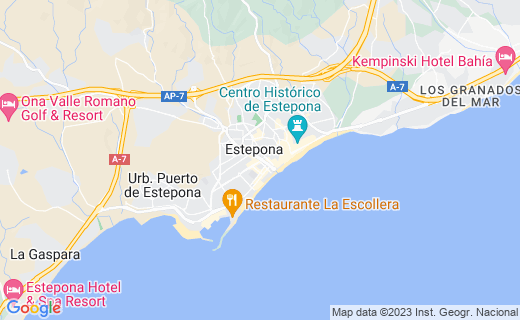 Have you ever been to Fuengirola?

The weather on Sunday wasn’t that nice by the coast so decided to head up to some villages further inland. Firstly, drove towards Yunquera which was some 35 kilometres from the hotel. The weather began to deteriorate the further inland and higher into the mountains went. Although it was beautiful scenery all around I could not see much through the low cloud and mist. Yunquera was a traditional Spanish white village where I had lunch, looked around a little and then headed for Ronda. This town is built across a high gorge connected by a picturesque bridge. However, by the time I arrived there the visibility was such that I was unable to see anything so headed back to Fuengirola via Tolox. Arriving at Tolox I soon realised that parking was going to be a nightmare as this village, another white village, was not built for cars so I drove around the one-way system and headed back down the mountain towards the hotel. I did stop at a roadside tavern/restaurant whose owner was motorcycle mad and had the walls of his premises covered in photographs and memorabilia of motorcycles and riders who had stopped at his tavern when participating in an annual mountain road race.

That evening I decided to eat near to the promenade where I found a nice Italian restaurant (Camarero), where the food was delicious and the service excellent.

At 10:30 I picked up a friend who was interested in looking at houses in Spain and we set off for a day of house viewing. He had decided that he would get a better feel for an area if he were to view a range of properties from traditional Finca houses to apartments. The agent took us to the outskirts of the village of Coin where we viewed a Finca style house which had six thousand square metres of land attached to it. Far too much land for him to cope with and maintain. The house itself seemed rather dark and didn’t do anything for either of us at all. Next stop was an apartment on a golf complex in Alhaurin el Grande. The golf course was a Seve Ballesteros designed course. Although the apartment itself was light and airy he did not like the idea of being in a golf complex amongst so many apartments and villas.

Next stop was another Finca just outside Alhaurin el Grande. A much smaller build than the first one and with much less land. The views were great but the house was too small and no room to extend or do any other structural changes. After viewing this house we headed back to his hotel in Fuengirola.

That afternoon I decided to explore the seafront and walked towards the harbour where the fishing boats and small yachts were moored. The walk took me passed a row of small eating places and onto the harbour front where I sat outside a coffee house in the late afternoon sun and enjoyed a coffee whilst watching the world go by. In the evening, I decided on tapas for dinner and found a lovely little restaurant called La Casona de Paqui which was situated in the back streets around Constitution Square. The waiter handed me a card on which was a list of all the different tapas dishes they did and I just ticked off what I wanted. Each dish was 1 Euro. I ate royally there and in fact ordered too much and was soon stuffed.

In the morning I went along the coast with my friend to a town called Sitio de Calahonda where we looked at a ground floor apartment that had a small garden attached. This was the best property seen so far. The style of the building reminded us of Gaudi and the apartment itself had a nice layout with a small garden area which was quite roomy and wasn’t overlooked. Afterwards we walked down from the apartment to the coast which was only five minutes away. Here we enjoyed a coffee by the sea and afterward spent some time walking along the wooden walkway which when completed will be over 250 kilometers long and which runs from Nerja all the way to Gibraltar. What a lovely way to walk the coast.

After dropping my friend off at the airport I decided to walk to Fuengirola castle which was at the edge of town towards Marbella. It was a lovely sunny walk along the promenade in front of beaches lined with sunbeds and sun umbrellas. I was surprised by the number of barbecue areas that were set out along the beach. Each barbecue area was a full-size rowing boat set up on a plinth and filled with sand. A lovely idea for families to barbecue their lunches or dinners whilst enjoying the sun and sea.

Fuengirola castle is set up on a hill and overlooks the sea on one side and a river on the other. Unfortunately, it was closed so I couldn’t go inside, however, it was a pleasant walk around the outside of the castle walls.

That evening I decided on another Italian meal and walked to an area I called restaurant alley which was a pedestrian road with wall to wall restaurants as well as sports bars for the sports-minded Brits. I chose a restaurant called Ristorante Ciao where I had my favorite Italian dish which was huge and I could not clean my plate up.

Ie decided to explore the coast towards Malaga and beyond. So I headed for a resort area called Toro del Mar. This area was some 90 kilometers east of Fuengirola towards Nerja. I spent several hours walking around the town and enjoying the beautiful seafront and promenade. I lunched in a lovely family restaurant where I had an omelette and a beer. For only 4 euros can you believe. I liked this area and decided to take my time and drive back to Fuengirola along the coast road instead of the motorway. The drive was lovely and enabled me to see the numerous villages along the route. I stopped for a coffee in Torremolinos along the way back.

That evening I ate at the tapas restaurant once again but this time tried not to overeat and order too much food.

As this was my last day of the holiday and I didn’t need to hand the car back until late afternoon I decided to stay in Fuengirola and explore it some more. There was a small train tour around the town which took an hour or so to circumvent the town and provided English commentary on places of interest. Though rather bumpy and uncomfortable as it had wooden seats it was an interesting tour. After this, I walked around town for a while before finding a Greek restaurant called Med15 where I ate a late lunch and chatted with the owners for a while.

At around 5:30 I headed for the car rental place by Malaga airport, deposited the car and was driven to the terminal. The flight left on time and after a smooth ride, the plane landed at Luton at 2:30 in the morning, finally making it to bed after a 45-minute run back to Northampton.