Cruise Along The Caledonian Canal In The Scottish Highlands

Stretching from Fort William in the south west of the Scottish Highlands, to Inverness in the north east, the Caledonian Canal is popular with tourists looking for a way to enjoy the magnificent scenery of the Great Glen. A leisurely cruise along the full length of the canal will allow tourists to enjoy three inland lochs and the towns of Fort William, Spean Bridge, Fort Augustus and the city of Inverness, capital of the Scottish Highlands.

History Of The Caledonian Canal

Originally the canal was intended to provide employment opportunities to the people of the north of Scotland where the population was suffering the aftermath of the Highland Clearances. Plans for construction of the canal were begun in the late 18th century when engineer James Watt undertook the first surveys of the area to determine the route the canal should take.

In the early 19th century, construction work was begun under the direction of Thomas Telford. The project ran twelve years over schedule and was finally completed in 1822. Unfortunately, by the time the canal was completed, many of the new style steam-powered ships were too large for the canal. Parts of the canal were closed for repair in the early 1840s as the lock at Corpach collapsed due to the use of shoddy materials.

The canal was never a commercial success but became a popular tourist attraction after Queen Victoria travelled along it in 1873. During the First World War the canal was used widely by fishing boats as the fishermen did not want to travel around the north coast due to the risk of U-boat attacks.

Control of the canal and responsibility for its maintenance was passed to British Waterways in 1962. The canal is now protected as a Scheduled Ancient Monument and attracts in excess of 500,000 visitors a year. 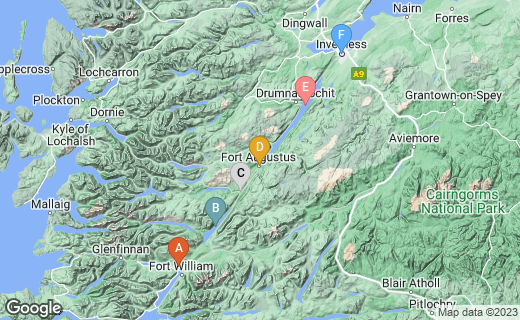 The second biggest town in the Scottish Highlands, Fort William sits on the west coast in an area called Lochaber. It is a great place to arrange a stop on a tour of the highlands as it is close to Glencoe, site of the infamous massacre of 38 members of the MacDonald clan in 1692 40 women and children also died of exposure following the burning of their homes. There is now a visitor centre run by the National Trust for Scotland in Glencoe, which tells the history of the area. Also a short distance from Fort William is Glenfinnan, where Bonnie Prince Charlie raised his standard, signalling the beginning of the 1745 Jacobite Rebellion which was finally put down by government troops at the Battle of Culloden in 1746. At Glenfinnan you can also see a viaduct made famous in the second Harry Potter film when the Hogwarts Express is seen crossing it.

Fort William is also a convenient base for hill-walkers and climbers as it is close to Ben Nevis, the highest mountain in Britain. It is a fantastic place for mountain-biking and in winter there is skiing at nearby Aonoch Mor.

The town also has lots of hotels, restaurants and shops for those who are looking for a less active vacation. Nearby Inverlochy Castle Hotel is a luxurious place to spend a night or two before embarking on a cruise of the Caledonian Canal which begins at Corpach, Fort William. One of the first landmarks you will encounter when traveling north is Neptune's Staircase, a system of eight locks which allow boats to be raised over 70 feet above sea level. It is a really interesting place to visit to see how the canal operates.

As you travel north along the canal, you will come to Loch Lochy, a freshwater loch which is the third deepest lake in Scotland. At its northern end is Laggan, where a battle known as the Battle of the Shirts was fought between Clan Donald and Clan Fraser in 1544. The skirmish was known as The Battle of the Shirts because the weather was very hot and the men had to remove their plaids, fighting only in their shirts. Later on in 1665, a feud between Clan Chattan and Clan Cameron which had lasted for almost four hundred years, came to an end when a deal was reached between the opposing sides at a site close to the loch.

There is spectacularly beautiful scenery to enjoy as you travel along the 9 mile loch. At its northern end, the Caledonian Canal links Loch Lochy with Loch Oich. This second freshwater loch is home to a variety of fish, reptiles and birds. Along with Loch Lochy and Loch Ness, it is part of the migration route for the Atlantic salmon.

Farther along the canal, at the southern end of Loch Ness, is the picturesque village of Fort Augustus which is also known locally by its Gaelic name, Kilchuimen. The fort for which the town is named was built in 1715 to prevent rebellion and it was captured in 1746 by Jacobite forces prior to the Battle of Culloden. The fort became the property of the Lovat family in 1867 and they passed it to an order of Benedictine monks who set up a school there. The school at Fort Augustus Abbey was closed in the early 1990s.

The village relies on tourism and as such many of the little shops stock local craft items and souvenirs. There are some great little pubs which are well worth a visit as you can moor your boat in Fort Augustus and spend some time exploring the surrounding area.

Heading north from Fort Augustus along Loch Ness, anyone cruising the Caledonian Canal route will need to keep an eye out for the famous monster believed to dwell beneath the deceptively calm waters. Loch Ness is the second largest loch in Scotland, with a length of 23 miles. The loch is extremely deep (755 ft at its deepest point) and is believed to contain more fresh water than all the lakes in England and Wales combined.

When cruising the loch, one site which is well worth seeing is the ruined Urquhart Castle on the western shore. Settlement on the site is believed to date to the 6th century but the castle whose ruins are visible today is from the 13th century. One of the main villages along the Loch side is Drumnadrochit which is home to a visitor center which explores the history of the Loch and the legend of the monster, affectionately known as Nessie. There are some great little shops to explore in the village.

Traveling north along the Caledonian Canal will evenutally lead to Inverness and the first iconic landmark is Tomnahurich Hill. Its name actually means 'Hill of the Yew Trees' but locals refer to it as the 'Hill of the Fairies'. There are dozens of stories associated with the hill. One local legend has it that a giant sleeps beneath the mound and will awaken in the future when Scotland is in peril. Another story tells of two fiddlers who spent what they believed to be one night playing music for the faeries beneath the hill only to find out when they emerged that a hundred years had passed. Tomnahurich is also famous as it was included in the prophecies of the Brahan Seer who predicted firstly rhat one day the souls of the dead would be kept under lock and key at Tomnahurich (it is now a cemetery). Another prophecy was that tall ships would one day sail past the hill and sailing past Tomnahurich it is hard not to think about that as it seems to have foretold the construction of the canal.

Inverness is the capital of the Highlands and the biggest settlement in the region. It has a wide range of hotels where it would be worth spending a night or two at the end of a cruise along the canal. There are mooring facilities for boats at several locations and it is possible to sail from the canal, out into the Moray Firth where you can spot dolphins and porpoises. Beyond that, lies the North Sea.

The city has a lot of different shops, many of which are designed to appeal to visitors. There are places to buy kilts and other traditional dress, Scottish themed souvenirs and whisky. Within a short drive of Inverness, there are several great historic sites including Fort George, Culloden Battlefield, Clava Cairns and many great little towns and villages.

Average Temperatures in the Highlands

Planning A Trip Along The Caledonian Canal

There are several things to consider when planning a cruise along the Caledonian Canal. The weather can be unpredictable in Scotland and even in summer, there can be heavy rain. It is important to bring suitable clothing - plan to wear layers so that you can put on a sweater if it gets cold, or remove a layer if the weather is fine. Always have a waterproof with you in case of a sudden downpour.

If you are bringing children, you will need to plan activities along the route to keep them entertained as being on board a small boat can be fairly confining. There are a lot of places to explore around the canal and you can do all sorts of fun things like water sports on the lochs or cycling on the towpaths that run along the length of the canal. Bikes can be hired from various locations. At Drumnadrochit, you can go horseback riding and this is suitable even for fairly young children.

If you want to make the most of some of the wonderful walks around the canal, good hiking boots are an essential and it is sensible to have a cell phone in case of emergency. It is easy to get lost in the countryside and it is best for visitors not to stray from designated walking routes.

You can hire small boats to cruise along the canal yourself and there are also holiday barges (some fairly luxurious) where you can relax and let the crew do all the work. If you do book a canal cruise it is possible to arrange a package that includes golf, fishing or other activities that interest you.