Cruising From the Port of Tampa

Debbie owns a scrapbook business and loves to take cruise vacations. Photography is her #1 passion when she travels.

Why Choose This Port

The Port of Tampa is probably one of my favorite ports to cruise from. Not only because it's easy to get to, but also because of the surrounding environment. It's not fancy like the port in Miami, or Fort Lauderdale, but it has what's needed.

A Little Bit about the Port of Tampa

The Port of Tampa, which as of January 2014, is now named Port Tampa Bay, and it's approximately 25 nautical miles from the Gulf of Mexico, so when you decide to cruise from this port, it takes several hours for the ship to get to the Skyway Sunshine Bridge.

Port Tampa Bay is run by the Tampa Port Authority and has been open since 1924.

The Port is next to Channelside Drive in downtown Tampa, and provides some places to eat, and a shopping plaza. If you arrive to early to board your cruise ship, you can always take a stroll along Channelside.

Just in 2018 alone, Port Tampa Bay had over 1 million in cruise ship passenger that took a cruise out of the port. It was the most passengers in a year, than Tampa has ever seen before.

We've only cruised out of Tampa twice. Once it was getting dark, and there was an overcast, but it was still light enough to get some photos. The 2nd time, we went after Daylight Savings Time changed back to where it gets darker earlier, and it was dark by the time we got to the bridge. It didn't make for very good photos.

When the ships cruise beneath the Sunshine Bridge, it almost appears like the top of the ship is going to hit the bridge. It looks like it's just inches that clears the bottom of the bridge.

Most of the cruise lines seems to schedule dinner around the same time you go under the bridge, so if you're dining, you'll miss this experience. We waited until after we went under the bridge, and then we would just go to the buffet that is being offered on the ship.

Don't think you'll get photos upon return of the bridge, because it's usually dark, and very early in the morning, when the ship returns back to the port after the cruise.

Tampa Has Something Other Ports Don't

One thing that the Port of Tampa has, that no other ports have, is the Sunshine Skyway Bridge. Traveling beneath this bridge, is an experience like no other cruise vacation, and it's definitely something that will remain in your mind for a long time to come.

We were a little surprised the very first time we took a cruise vacation out of the Port of Tampa, because we were expecting that we'd leave the dock around 4:00pm, and be at the bridge by 5:00pm, at the latest. Boy were we surprised, when we didn't reach the bridge until almost dark time. I think it took us about 2 1/2 hours to get there.

Another thing that this port has that the others don't, is a lower price for parking. The parking is lower at this port is less costly than the other ports in Florida. It costs $15.00 a day to park your vehicle across the street from the port. It's all security monitored, and it's in a parking garage. We've used it several times, and have never had any problems.

The other ports have parking at the port that is $20 - $22 per day. It might not seem like that much of a difference, but when you add it up for a 7 day cruise, it could be as much as a $49 difference.

Cruising Beneath the Sunshine Skyway Bridge

Photos from the Port of Tampa

*All photos were taken by me. 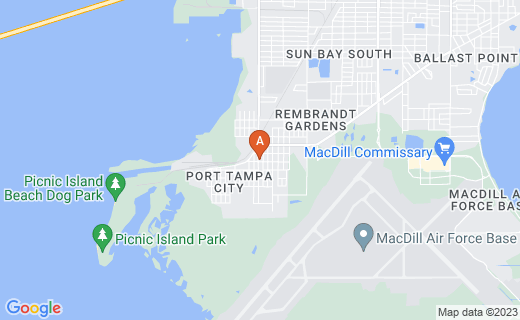