Trading With The Enemy Act

This act became law in 1917, allowing the USA to place sanctions against enemy nations in time of war. After the Communist revolution in Cuba of 1959, the American government named Cuba an official enemy and sanctions tightened under the Administration of President John Fitzgerald Kennedy to the point that the American public and its businesses could no longer visit, purchase from, or sell goods and services to Cuba. A few military, government, scientific, and academic journeys were allowable, along with business travel initiated by journalists.

Talented journalist and author Thomas Miller visited Cuba in the early 1990s and wrote about his eight-month sojourn on the island in three editions of his book called Trading with the Enemy: A Yankee Travels Through Castro's Cuba (1992, 1996, 2008). His book is engaging, but has no photographs, unfortunately. He did, however, enjoy learning about a major Cuban botanical garden during his stay.

Embargo and Its Effects on Agriculture

Before the Trading With The Enemy Act took effect, a portion of the American-led sector of the Cuban sugar industry helped to create the largest botanical garden on the island. Working in his family’s sugar businesses, the Bostonian Edwin Atkins (1850 – 1926) took over the bankrupt Cuban sugar operations at Soledad Sugar Estate in the middle 1880s at the age of only 16.

In a few years, Edwin decided that scientific input was required in order to fight the adverse economic impact of beet sugar and Hawaiian sugar competition, even though he was already producing over 4,000,000 pounds of sugar annually since 1887. His efforts became an agricultural project and then a botanical garden of over 2,000 species of tropical plants that flourished until the American embargo of the early 1960s.

The town of Cienfuegos on the western side of Cuba, was founded in 1819, because of sugar popularity and successful plantations held by Trinidadian families who had relocated here with their slaves. 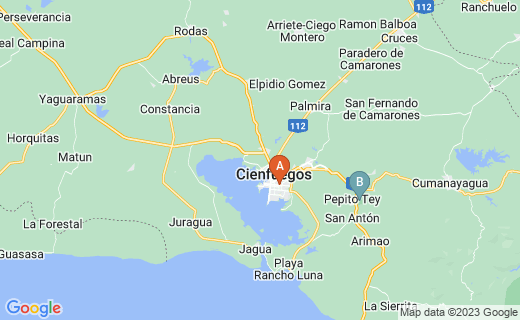 A Botanical Garden in Cienfuegos

Backed originally by Edwin Atkins and Harvard University in Massachusetts, the garden was a useful place for experimenting with hybrid sugar canes to produce the most disease-resistant, healthiest plants with the highest sugar production. This occurred on land owned by American Edwin Atkins’s sugar plantation in what is now Cienfuegos, which means “100 fires”, even though the name is the surname of the man who founded the city in 1819 - Jose Cienfuegos, the Captain General of Cuba.

Built to look at ways of improving additional commercial crops as well as sugar cane, the Harvard Botanic Station for Tropical Research and Sugar Cane Investigation project began in 1899. Horticulturist Robert Grey of Harvard, funded by Atkins, traveled there for the University to catalogue tropical plants from around the world as well.

Flowers of the Boulet de canon, in Cienfuegos.

Cuba is relatively small, about the size of Pennsylvania, but it provides approximately 250 greenspaces for conserving native plants and promoting sustainability. This thrust extends back to the work of Edwin Atkins and Harvard University as early as 1899. Besides one large botanical garden in Cienfuegos southeast of Havana, and a larger park in Havana, a few smaller garden spots offer visitors the experiences of the world’s tropics, from orchids with the scent of chocolate to medicinal plants.

Harvard University at the Garden

By 1920, the garden was an official part of Harvard University and in 1924, it was renamed the Harvard Biological Laboratory. In 1932, a name change occurred to make the site the Atkins Institution of the Arnold Arboretum (of Harvard). Just after WWII, the arboretum pulled out of the project, which was renamed the Atkins Garden and Research Laboratory.

Even with a 99-year lease of the property issued in 1924, Harvard relinquished its involvement with the botanical garden after Fidel Castro became the leader of Cuba in 1959. The garden is still healthy and open to tourists in the 21st century, having become one of the major attractions on the island. Without the interference of the Cold War, the garden might have provided many useful advances to commercial and other horticulture projects, as well as having become a visitor’s highlight.

What People Are Saying About the Garden

Visitors' opinions logged on TripAdvisor and LonelyPlanet websites are not all positive for the Cienfuegos garden facilities.

Tourists who gave opinions online were disappointed that they found no lawns or flowerbeds in this botanical garden. The did find at least 280 different sorts of palm plants and over 65 varieties of figs, along with two dozen types of bamboo among many banana plants. Those who took the guided tour saw the most in the least amount of time.

Visitors mentioned that a shuttle service was available to the site for $10 in 2015 and that guided tours of about an hour were available for the same price. One couple, who walked around on their own, reported that they did not see much. Visitors who took the guided tour reported seeing various mammals, lizards, birds, and flowers. A bar, coffee shop, and book store are also mentioned.

Harvard pulled out of the project completely on September 1, 1961 during John F. Kennedy’s first year in office, leaving the garden to become the Jardín Botánico de Cienfuegos or Cienfuegos Botanical Garden run by the Cuban government. Today, it is a Cuban National Monument. The sugar plantation became the Pepito Tey sugar complex.

However, the Atkins Fellowships provided by Harvard University allow students to study tropical plants at the university laboratories in Massachusetts today.

Thomas Miller gained permission to visit Cuba for eight months during the first years after the fall of the Soviet Union. At that time, Russian aid to Cuba was ended and billboards everywhere encouraged people to save electricity and to make do with less of everything. Even Xerox machine usage was tightly controlled or even rationed.

The author found the people to be literate and appreciative of the fine arts overall. He also found an active Jewish community, where he could attend services.

In Cienfuegos, Miller stayed at the Jagua hotel, built in the 1950s and used mostly by foreigners. Ongoing protests were held in Cuban cities to decry tourism apartheid, the act of denying local visitors the same services as were provided visiting international people. In 2015, the hotel has been remodeled for simplicity, with several glass walls, simple furniture, and a well maintained outdoor pool. At this writing, a room for one night for one adult costs $74.25.

Hotel Jagua, on the Bay of Cienfuegos 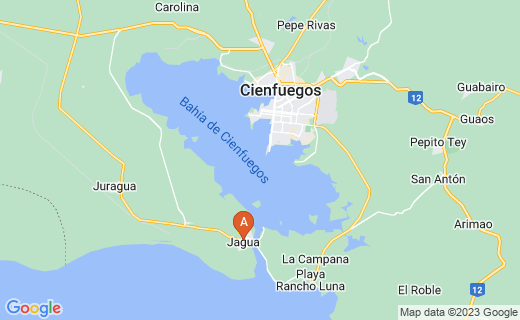 In 1990, the Academy of Sciences of Cuba operated the Cienfuegos Botanical Garden on 252 acres of land. The author found a huge rock garden in the shape of Cuba, planted throughout with cacti. The trees he found in the park offered up their barks for the successful treatment of arthritis and asthma. A large number of mammals and birds lived in the park as well.

A large hardwood savannah was healthy at that time, reported razed in later accounts and news articles that arrived in the USA. The loss of Soviet funding undoubtedly hurt the gardens. for a short time, help came in people and small funds from as far away as Paris and Kentucky, until economics made travel to Cuba more difficult.

Orchids in Cuba and the Tropics

Orchid Flora of the Greater Antilles (Memoirs of the New York Botanical Garden)
In 640 pages, this book shows and discusses 594 species of orchids. Look for the darker, chocolate-scented varieties here.
Buy Now 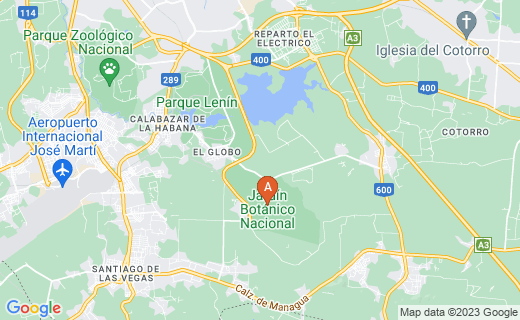 Steps Toward Ending Embargo in 2015

On Saturday April 11, 2015 President Barack Obama and Cuban President Raul Castro met in Panama in a step toward lifting the sanctions imposed on the island country by the USA from 1959 – 1963. Such an elimination of sanctions would allow botanical garden experts from America once again to visit the major garden in Cuba, bringing information and helpful products with them. Additional tourists, thousands from the USA, would pour into Cuba with their dollars to enjoy the garden, building the local Tourism Industry.

The meeting was a sidebar to the Summit of the Americas, an event held every four years and one that for many years, Cuba was not permitted to attend at all. President Castro delivered a long speech on 4/11/2015 about grievances against the United States, including its Cold War support for Cuban President Fulgencio Batista, the Bay of Pigs Incident, and the US prison at Guantánamo Bay. (Reference: Radio News Programming 4/11/2015, 2 pm – 5pm EST; 90.5 WCBE-FM and 610 WTVN.)

In America, sides formed in the Cuban question long ago. One side wishes to continue embargo and refuse to recognize the existence of Cuba as a Communist nation - one suspected of human rights violations. Another side wishes to quickly eliminate the embargo altogether. Some people are unsure how to think about this question.

Regardless of how the embargo talks end, I would like to see more film and pictures of the Cuban parks.

The Streets of Havana