Cueva del Viento: The Cave of the Wind of the Canary Islands

Cueva del Viento, meaning Cave of the Wind, is a village situated over what is said by some sources to be the longest and largest volcanic cave system in the world, although the website for it says it's the biggest in Europe. Either way, it is a fantastic place to see and is in some of the most beautiful countryside on the Canary Island of Tenerife.

Cueva del Viento village is a few kilometres above the well known city of Icod de los Vinos and can be reached by bus, but to get to the caves involves quite a long walk through some beautiful forested mountainside.

Where is Cueva del Viento? 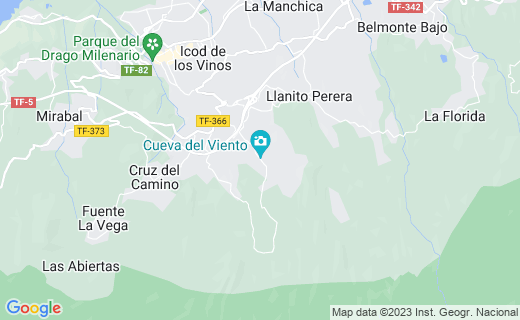 Fortunately there is a newly opened visitors' centre that runs trips to see inside the cave and a guide accompanies parties of up to 15 people and tells them all about it and shows many of its incredible features.

A taxi to the visitors' centre from Icod de los Vinos costs about 5€, which isn't bad at all, and probably a good way to get there if you don't have transport otherwise.

A minibus takes visitors from the centre to the stretch of forest where the entrance is located. It has a metal safety grid in place to stop accidents and before you reach the main entrance there is another such grid over a very deep shaft that drops vertically down.

The woods around Cueva del Viento are typical Canary Pine forest and many endemic wild flowers can also be seen growing in the area that also provides some breathtaking views downhill towards the sea and uphill to Pico Viejo and Mt Teide, which is the highest mountain in Spain.

Visitors are also provided with special caving helmets with a torch attached to provide light. This is essential because the cave would be in pitch blackness otherwise.

The Cueva del Viento cave system was formed by volcanic lava that erupted and cooled forming tubes and terraces and strange rock formations. There are some 17 kilometres of caves and many smaller cave tunnels leading away from the main one.

The Cueva del Viento caves are on three levels and form an underground labyrinth but visits to the section that is open to the public takes in 180 metres of it only.This is more than enough, however, to show what an amazing underground formation it is.

Cueva del Viento also boasts a large number of unique cave insects, spiders and other creatures adapted to living in extreme conditions underground. However, when I went there I only saw a few flies that had presumably came in the same way as we did and got lost, and some cave spiders on the ceiling above. It was obvious what the spiders ate!