Several weeks later, springtime softness had come to South Dakota. But Sam, Spotted Hawk and Bill, the Viet Nam War Veteran, had grown incredibly tired of being in prison. They heard that the Wounded Knee take over was in a very bad situation. The Nixon administration ordered Wounded Knee to be surrounded with armored vehicles and increased the number of FBI agents and military personnel. One young Native American had been killed by rifle fire and a federal agent had died as well. At least it wasn't a massacre like Wounded Knee 1890. Apparently the Nixon administration had agreed to talk about social issues on the rez only if the Indians surrendered their arms (mostly .22's and some hunting rifles.

"Wouldn't you know," Sam said, "that after they turned in their weapons, the Nixon people broke their promise to sit down and listen to the social concerns of AIM." (American Indian Movement).

"You know that one of the things my people wanted," said Spotted Hawk, "was the return of a significant chunk of land to the Lakota Nation that was seized during World War Two for use as a gunnery range!" Sam added with a raucous chuckle, "as far as I know World War Two ended a good while ago!"

"We returning vets from Nam demand those things for you people as well," Bill lamented. "But damn it, instead of listening, the Nixon people threw all those at Wounded Knee protesters in prison, except I hear that some of them got life sentences supposedly for treason. Ha! That's a good one."

The three of them headed back to the cell block after a brief respite in the open air where they did outdoor work like painting outside walls, turning soil for planting a prison garden and disposing of dead weeds and leaves. All Sam and the wichasha wakan could think of were those Black Hills, the Paha Sapa Wakan. Bill dreamed of getting back to his wife and kids in Chicago. Fat chance that the Nixon boys would ever begin reconsidering the 1868Treaty of Fort Laramie agreeing that the Black Hills would belong to the Indian people as long as grass grows and rivers flow. Never would the Lakota people see one small acre returned to them. It's not that they want all of the Black Hills returned. How could Mount Rushmore or small towns like Custer ever be returned?

"Harney Peak as it's called in English."

"Oh yea, I saw Harney Peak to the northwest from my beechcraft airplane."

"Tell ya what," said Sam. "Why don't we reclaim the Black Hills in some other way--beyond time and space that we're locked into."

"What do you mean," asked Spotted Hawk. "I think I know, but let me hear it from you."

"I mean by placing prayer flags on trees up in the Black Elk Wilderness Area."

"Ha! You took the words out of my mouth," snapped the wichasha wakan."

By late August, 1973 the three men were released, free to go as long as it wasn't to AIM meetings. Bill hopped a bus from Rapid City to Chicago. Not that he didn't want to hang around his Indian friends, but he just had to get back to his wife and kids. The wichasha wakan and Sam returned to the rez and to visit with his wife, daughter and grandchildren. His wife wondered if ever she would see her husband again. She cried and cried when the old man entered his little cabin. His daughter and her children prepared a big feast of elk stew and fry bread with chokecherry gravy. They were all pleased to meet Sam Ravelle, the Shoshone college professor. A few days later, they got busy producing prayer flags made out of ticking in the colors of the six directions: red for the East, yellow for the South, Black for the West, white for the North, blue for the sky, and light green for the Earth. The old man constructed several prayer bundles made of much larger strands of ticking all tied to a wooden ring.

Within a week or two Sam and the wichasha wakan drove up to Sylvan Lake at nighttime and hiked the Harney Peak Trail tying prayer flags to lodgepole pine tree branches every hundred yards or so. At the very base of Harney Peak where the holy man of the Lakota had sought visions in the late 1800's--Nicholas Black Elk--Sam and Spotted Hawk laid prayer bundles on flat rocks. All this was to reclaim the Black Hills spiritually.

After this ceremonial task was done, Sam and the old man returned to Rapid City where Sam said goodbye to the wichasha wakan. As he hopped a bus for Wyoming, he said he was thinking about going over to Ireland and paying a visit to Kitty O'Connell, but he'd have to work first back at his Wind River Indian Reservation to earn enough money for the trip. The old man waved goodbye with tears in his eyes.

Readers interested in "The Knee" of 1973 should read Stanley David Lymal's book Wounded Knee 1973: A Personal Account (1993) and also of interest is the movie "Thunderheart" staring Val Kilmer. and Graham Greene.which explores corruption of uranium corporations greed for mineral rights on the rez. 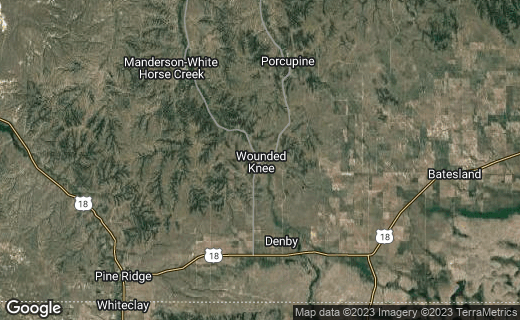 Did you know that Wounded Knee SD was independent from USA in 1973?