Just a few miles west of Okmulgee, Dripping Springs State Park remains one of the most popular places to visit in the region. This park, combined with Okmulgee State Park, offers over 1,700 acres of breathtaking scenery, abundant wildlife, and some of the best bass fishing in the world.

For the weekend traveler, this spot is the perfect place to cool off by the waters edge while enjoying the beautiful ambiance of one of Oklahoma's finest lakes. For the avid outdoors-man, the area offers several primitive campsites, as well as hunting grounds to the north of the lake.

Dripping Springs is in an area that is rich with history, and has been a popular tourist destination since the early 1900s. Today, the area around the park features a wide variety of amenities, from more than 100 different campsites, to completely modern facilities.

Nearly 300 million years ago, Okmulgee Lake was much larger than it is now. In fact, the waters left behind here once covered a vast amount of space, spanning across much of North America. During the Pennsylvanian Period that ranged from 200 to 250 million years ago, the future state of Oklahoma was swamped under a vast sea.

As the waters receded, many unusual rock formations appeared in the area, which are still visible today. Besides the unusual rock formations, the receding sea left behind thousands of sea creatures. Around Dripping Springs State Park, visitors may occasionally encounter the fossil Gymnophyllum Wardi, or "Button Coral". This type of fossil can only be found in very few places in the world. Visitors can view samples of this fossil in the state park's gift shop.

In more modern times, during the 1830’s, the Creek Indian settled in the area after their relocation from the east. The abundant resources in the area, plus the always-flowing crystal-clear spring water, provided the Creek Indian with everything they needed to thrive. Ultimately, the Muscogee (Creek) Nation would establish their capitol nearby. The second Creek Capitol can still be visited in the heart of old Okmulgee.

The Creek Indian hunted and fished in the area around Dripping Springs long before white men began to settle the area. In fact, Okmulgee is a creek word that means, “bubbling water.” As more white people settled in the area, they also discovered the beautiful area around Okmulgee Lake. During the early 1900’s, an old newspaper stated that one couple, “together with the choicest edibles of the season and a colored cook to do the manual labor" headed out to Dripping Springs for a weekend of relaxing.

After the Great Depression, the boomtown of Okmulgee saw a rapid decline. As men begged for work, both local and federal governments sought ways to ease their financial burden. The Works Progress Administration (WPA) and the Civilian Conservation Corps (CCC) helped to stem the tide of the financial spiral, and put many men to work. Many of the structures found around Dripping Springs sprung up in direct relation to these programs. Perhaps the most impressive was the Okmulgee Spillway just a couple miles east of Dripping Springs.

Even though the area was a thriving tourist destination, it wasn’t until 1963 that the Okmulgee State Park was first developed. Thirty-five years later, in 1988, Dripping Springs State Park was created, forming an area of over 1,700 acres with the two state parks combined.

Weathered tree stumps stick out from the water’s surface like massive bony fingers, providing the perfect place for bass to play. Designated as Oklahoma’s first “Trophy Bass Lake”, the lake teems with the fish, almost begging to be hooked. For the last few years, the lake has become a popular stop on the tournament circuit as fishermen test their skill against the lake and its submerged trees.

Besides the largemouth bass that call the lake home, catfish, crappie, white bass, and bluegill also reside in these tranquil waters.

Dripping Springs State Park covers 535 acres around the 6,436-acre Okmulgee Lake. Boating, swimming, and fishing are popular activities on the water, while nature trails, hunting, and camping are some of the more popular off-water activities.

The park is located five miles west of Okmulgee on Highway 56. 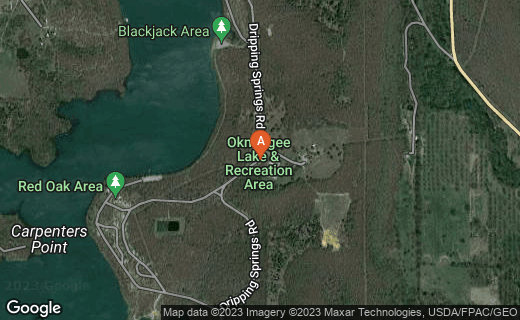