Dublin Fair City (Where I managed to lacerate my Finger)

So I have never been to Dublin and was really excited when we finally booked a three day trip. We would arrive on a Tuesday afternoon, have the whole of Wednesday to explore, and return home on the Thursday. Little did I know that I would spend two hours in a doctor's surgery and be hampered by a wounded hand for the rest of the stay. Idiot, I hear you say, trust me, stupidity is not reserved for the young and inexperienced.

Day one - How it Happened

We arrived in Dublin on the ferry from Hollyhead and managed to walk through the city relatively unscathed. Included was a walk through the port (we rarely use transport if we can walk and see the sights). We even found a traditional Dublin pub to have a pint. No, we waited until we arrived at our lodgings where I promptly put my finger into an automatic gate lock just as it was opening. Please don't ask any more, it is embarrassing enough as it is.

By using wads of tissues we managed to get some plasters on, to stop the bleeding. I did not want to sit all night in A&E so instead, we just added more band aids until it stopped. Perhaps not the wisest choice but the one that I made.

Then we headed out to supper at Milanos where we enjoyed pizza, which I had to cut with my left hand, an art in itself. We had a casual walk back alongside the canal and by now my finger was throbbing but I accepted that as punishment for being so daft. 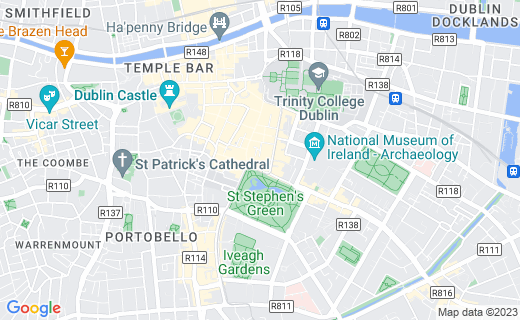 A night spent restlessly worrying about knocking the finger or messing the sheets was followed an anxious morning of awkwardly getting dressed. It is amazing how difficult it is to do the simplest tasks one handed.

The Wednesday was supposed to be our full day in Dublin to allow us to explore the city and we had a lot planned, including a trip on the hop-on hop-off bus. The city has several of theses types of tours. But instead, at 9am, without breakfast we were heading for the Albany Clinic.

I had expected a wait, but no, they took me in immediately and I was attended to by a surgeon and two nurses. The longest part was cutting away all the band aids that I had piled on. They cleaned and tidied up the wound and made three stitches to pull the wound together. Then the nurses applied three layers of cotton over an inner layer of gauze.

Close your eyes for the next bit. I had to have a tetanus injection. Like most people, I am a bit squeamish when comes to needles but I looked the other way and it was the tiniest of pricks. Then sleeves rolled down and I was good to go.

There was a little bit of paperwork to be completed but eventually we were on our way by about half past ten. I had to have a course of antibiotics for which I was given a prescription. There were two or three appointments that were now behind time because of me, but the doctor assured me he would catch up. I cannot praise this walk in clinic enough for their expertise, kindness, efficiency and concern.

Finally we headed to Caffe Nero for a dire need of revitalization...

Caffe Nero - To gather our thoughts

Dublin is a lovely European vibrant city and we decided the best way to see it was by the chartered hop-on buses. Our bus cruised around all the main sites including bits that we had walked the previous day. Highlights included the two cathedrals and the Guinness Plant. Being a train buff I was also able to see over the wall of the main line into Dublin and watched a few trains go by as we passed.

After a cup of tea at Marks and Spencer we decided to take in a bit of culture. The Art Gallery is undergoing a refurbishment but a lot of the galleries are open, so we made our way along the busy streets and were pleased to find it was free admission with just a donation. There is an amazing collection of 17th century art of all kinds depicting daily life as well as important people. There is also a lovely cafeteria and the place was buzzing with students.

Later we followed the streets around Temple Bar and the Ha'penny bridge, picking up my prescription at Hickeys Pharmacy. We spent a lot of time just taking in the sights and sounds before finally heading back to our room and a freshen up before supper at Sabo's. The bandage on my thumb survived the ordeal and while there was some seepage, nothing that was cause for concern. The nurses had done a good job.

We knew all along that this was to be a quick visit but we were determined to make the most out of the last day. Our ferry was not until 3pm so we started off with breakfast at K C Peaches before making our way west to the Brazen Head, a pub thought to be the oldest in Dubin if not Ireland itself. We shopped along the way so it was well on to noon before we arrived. The pub is indeed old but the outside facade is probably Georgian while the inner rooms are older. We enjoyed a drink here but then it was time to move nearer the ferry and we had lunch at a salad bar called Chopped in Temple bar. The name says it all really, you line up and order your ingredients which is passed on to the choppers who add dressing and then they finely chop your salad. It really was very good but we were eager to move on so I saved some of mine for later. The bandage was starting to look a little worse for wear so we started our trek east along the banks of the River Liffey.

End of the Saga

We arrived at the ferry in good time but now the bandage that had survived two days in Dublin, was looking the worse for wear. We were told by the doctor to get it redressed in 48 hours so as soon as we arrived in Hollyhead we went straight to the car and drove across Anglesey to the Gwynedd Hospital in Bangor. There was a considerable wait but eventually we were seen and told the wound was healing nicely and they would redress it and send me on my way home.

The waiting time was spent eavesdropping on the other patients. A guy who had broken his arm in sport, a bee sting, a girl with a broken pinky toe, a Canadian who had cut his hand whilst scaling Snowdon. I have an amazing respect for these A&E doctors and nurses who have to deal with everything thrown at them on a nightly basis.

Have you ever done something really silly on holiday

So the moral of the story is even at the age of 63 I can still do stupid things. How quickly an enjoyable vacation can be changed by being careless. My finger is well on the mend. It is amazing how quickly the body heals itself and yes, I finished the whole prescription of antibiotics.

The whole thing could have been a lot worse, I was lucky.