Earth Day in Washington DC on the National Mall

The Capital of the United States has provided some of the most enjoyable and interesting expriences of my life. Since middle school, I have accumulated lasting memories of visiting the Smithsonian Air and Space Museum, an early National Pow Wow of the American Indian, the National Zoo (where I learned that kiwis are not really extinct), the National Archives, the Pentagon, and Arlington National Cemetery. I even remember the very first Earth Day in America - April 1970, though it is a vague recollection of youth. Today's commemorations are much larger and more unforgettable.

I Remember the First Earth Day

In 1970, I did not know much about conservation, except that I already knew that I did not like to see anything wasted - or thrown away without a good reason. Earth Day was mentioned on the local news in 1970, but was not covered fully by the news reporters. Our school did not mention it, but handbills and flyers stapled onto telephone poles spoke of conservation vs. waste.

Conservation had been discussed throughout school, so that concept was familiar.

A prediction of the era that became more focused in the 1980s was that the State of New York would become a tropical jungle climate by the 1990s. Global warming did not have a name yet in my area and explanations were hazy about what was causing the warming trends in America. The rest of the globe was not addressed, except perhaps in the college classrooms that I would inhabit in the future.

The public did not feel that America was warming, either, because the winter of 1970-1971 was very cold and windy. This was followed by the Great Blizzard of 1977 - 1978, in which so much snow fell during the first night that the doors to homes were buried three-quarters under snowfall and would barely open. We had to reach out with whatever was handy and dig our way out of the houses.

Conservation, global warming, and Earth Day developed into more well explained concepts in the 1980s - 1990s. Earth Day became a more widely known holiday and increasing numbers of people began to pay attention to conserving resources beyond being careful not to run up the utility bills at home.

Note: In the August 1, 1955 issue, pp 43ff, Life Magazine featured the article titled Throwaway Living, which may have spawned the term "throw-away society". A book published in the early 1970s and long out of print (also forgotten) targeted the throw-away society, planned obsolescence, and waste, and was usually sold in a pair with The Greening of America (see below), which predicted the rampant consumerism and Corporate America that we see today. A newer book on throwaway living is shown below.

One hundred years before the first Earth Day, my paternal grandfather was born, a few years after the American Civil War. He lived to be close to one hundred himself.

Reconstruction in the South and farming life in the North were neither a time for waste of any kind, and more so during The Great Depression of the 1930s. My grandfather left the one-room school house at age 8 to work on the farm and the family and hired hands never starved. They worked long hours, but always had food, fuel, clothing, and even a car - a Model A.

My father learned not to buy cut Christmas trees, but rather to grow them yourself or purchase one with a good root ball on it so you could plant it after Old Christmas (Twelfth Night, or around January 6). An uncle built a solar house in 1960, before alternative energy became well known. Thus, sustainability was always present on the farm, having the Earth yield up the resources that the farmer used carefully to feed his family and make a living - as did the Native Americans on the other side of my family. None of us ever called what we did

sustainability or Earth Day, but a lot of us respected it at least a century before it became popular. Now we are entertained on the National Mall with music and games, too, while we take care of our resources!

"Not a single vote was cast against the Wilderness Act of 1964 when it finally reached the Senate. Congress thought it was setting aside nine million acres of wilderness so posterity could see a sample of what their forefathers had to conquer in order to create America. The new law was the crowning achievement of the Wilderness Society, to which its Director, Howard Zahniser had devoted five years of constant lobbying. Though unnoticed at the time, the new law signaled an end to the traditional "conservation” movement and the beginning of a new environmental "preservation” movement."

See more of the story at the following link:

April is the month in which the most visits occur to the National Mall in Washington DC, largely because of the popularity of the commemorations of the Cherry Blossoms as they fill the landscape around the Tidal Basin. It is a beautiful sight and many tourists photograph the trees, while some set up easels and paint landscapes containing then in watercolors, pastels, and oils.

April is a good time for visitors to stop by the mall and participate in Earth Day and in 2013, the mall celebration date of April 22 is on a Monday. Festivities for all ages occur from 11 AM - 7PM. If you attend, be sure to catch the musical entertainment on the stage on the mall. Many foreign embassies in Washington will have booths and displays, and there will be Voter Registration in the midst of the big rally for sustainability.

Earth Day in DC has been expanded to a four-day celebration called Earth Week, headquartered at Union Station, northeast of the mall. However the celebration now includes the entire month of April. New activities for the family include film screenings, panel discussions, contests and giveaways, and some surprises.

Earth Day on the DC mall always includes a large rally, free musical entertainment, speeches by civic leaders, and celebrity guests that people like to see. The Environmental Protection Agency (EPA) hosts family-friendly interactive activities in their National Sustainable Design Expo. In that Expo, you will find the EPA, a number of green businesses, many non-profit organizations, and crowds of college students from across the United States, all presenting their conservation and green projects.

The US Botanic Garden is also on the National Mall and contributes its own activities to Earth Day - and now, Earth Month! I could spend a week at this one location.

At the Smithsonian's National Zoo, Earth Day is held from 11:30 AM - 3:00 PM (April 20 in 2013). Activities for the family are presented for enjoyment and education, including useful childhood crafts like making recyclable flower pots.

Check out the other Smithsonian Museums on the mall and nearby, and be sure to visit the National Museum of the American Indian for their own celebrations of nature and the Earth. The stage area of the mall celebration should be at the east end, near both the Botanic Garden and American Indian Museum with its restaurants.

The Library of Congress, just east of the mall way, maintains an entire section of references and media about Earth Day. 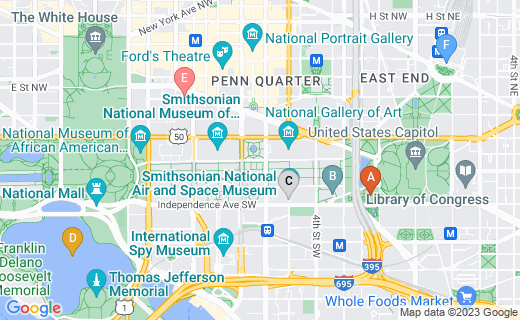 This museum has a food court that many visitors feel is the best in all of the Smithsonian Museum's.