I am a former Vietnam-era AF air navigator with degrees in History and Economics. Areas of interest include aviation and military history.

A Shrine to a Sinner

El Tiradito roughly translates into English as the castaway or the outcast and the name refers to the person who was killed and / or buried there sometime in the mid-nineteenth century.

The individual was a castaway because his sin at the time of death was such that the Catholic Church (Catholicism being the religion of Tucson during that era of Mexican rule) would not allow him to be buried in the consecrated ground of a Catholic cemetery.

The shrine is a city park, albeit a tiny park as it is no bigger than a small city lot.

And the reason for its small size is that it is simply an old city lot with the remains of a home still on it.

The lot is sandwiched between parking lot of the El Minuto Cafe just to the north and another interesting old nineteenth century home or business structure on the other side.

Part of the attraction of El Tiradito is its uniqueness - the partial remains of an old house with dozens of votive candles and religious objects in front. It is obviously an old religious shrine. 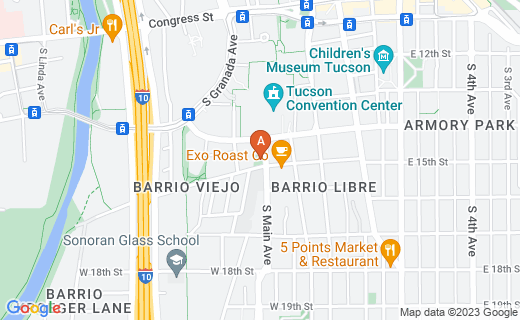 Only Shrine in U.S. Dedicated to the Soul of a Sinner

The historical marker at the front of the lot has the title El Tiradito (The Wishing Shrine) and then goes on to describe it as ...the only shrine in the United States dedicated to the soul of a sinner buried in unconsecrated ground.

Just who is buried here and what his crime was is a mystery surrounded by legend.  And there are numerous legends and stories surrounding the site.

One story claims that the body of a stranger, who had died by hanging, had been found dumped there one night with the noose still around his neck.

Not knowing what to do with him, he was buried on the lot where he was found and people soon started coming to leave candles and pray.

Another legend claims that a priest was having an affair with the woman who lived in the house and, torn between his priestly vocation and his love for the woman, he ended up taking his life on this spot. He was then buried where he committed suicide.

Tragic Stories of Love and Death

In a more romantic vein, there is a story that claims that two men were in love with a beautiful young woman who lived there and, when neither one would give her up, decided to settle it with a duel (this was the late 1800s in what was then the Wild West).

Both shot at once and and both hit their mark. Mortally wounded, both died and the devastated young lady began lighting candles and praying every evening on the spot where they died. The deaths probably could have been avoided it she had just made up her mind before the duel, but then, a good love story always involves tragedy.

This particular story, while remaining tragic, is one of the ones that does not include the burying of the bodies on the property. And this adds to the mystery as, to my knowledge, there is a common belief that a person was buried there but there has never been any attempt to verify that and there is no marker indicating where such a body was buried.

The adultery stories are the most common or at least the most popular. This may be due to the fact that in the first half of the twentieth century after the shrine had become a popular spot, the owner of the land on which it sat wanted to donate it to the city of Tucson in order to preserve it. However, before the City Council would accept it they wanted the official story.

Since the story of an enraged husband killing his wife's lover after catching the lover in bed with his wife always makes for a good tale, this was the story given to the City Council as the origins of the shrine.

Here are three of the various versions of that story. Two of them involve a young man named Juan Olivera. In the first one, Juan's dying mother in Mexico asks Juan to got to Tucson to find his father who left Mexico years before to find work in Tucson.

Juan went to Tucson and began knocking on doors seeking his father. At one home he is met by a beautiful young woman who said that his father lived there but was out chopping wood. She invited Juan in to wait for his father and introduced herself as his father's wife.

When the husband came home and found his wife with another man in the parlor he flew into a jealous rage and killed Juan with the ax he was carrying. The father covered up his crime by burying Juan under the front porch.

In another version, the woman in question is Juan Olivera's (and this may have been a different Olivera) mother-in-law instead of his step-mother. In this story Juan is having an affair with his mother-in-law and, when his father-in-law comes home unexpectedly and catches Juan in bed with his wife, the father-in-law shoots and kills Juan. The daughter, to whom Juan is married is never mentioned in the story.

The final murder / adultery story involves an un-named gambler who falls in love with a beautiful woman and, when caught in bed with her by the woman's husband, is killed by the husband.

In all of these stories, the woman whose lover has been killed, begins going out to the yard each evening to light candles and pray on the spot where her lover met his end (and in some of the stories that is also the spot where he was buried by the husband).

Soon other women start coming to light candles and pray. In time the dead lover is basically forgotten and the women begin praying to have their needs met rather than for the soul of the forgotten lover.

In time it came to be believed that one could come and light a candle and then pray or wish for anything,

If the candle burned all the way to its base without the wind blowing it out, the wish would be granted.

This is how El Tiradito came to be known as the Wishing Shrine as well.

In addition to people coming to pray or to simply view the site, El Tiradito is also a spot where many people choose to get married.

Although I can't imagine why anyone would want to begin their marriage at the shrine of an adulterer.

Historic Marker in Both English and Spanish