Exploring the Back Roads of Idaho: Craters of the Moon National Monument

I lived in either Great Falls or Missoula Montana for a small portion of my life. I love Montana and the Rockies and spent many of those years hiking Glacier and other parts of the state.

My parents lived in Nevada and I would constantly drive between Montana and Nevada through Idaho. Usually I would drive to Pocatello Idaho from Butte Montana on Interstate 15 past Idaho Falls. A beautiful drive with mostly flat terrain in case of heavy winter driving.

Once you hit Idaho, things got a little flat but not boring. From the exit of the Sawtooth, if you are heading south on Highway 93 from Missoula, until a short distance out of Twin Falls lies the Craters of the Moon National Monument. I witnessed, on either side of the road, a vast land of volcanic rock, black, rocky, and rugged.

I never spent the night at the campsites available or did too much extensive hiking, but on every trip I would grab my pack, pull off to the side of the road, and walk into the rocks. A good ways out I would stand and stare at the alien landscape and wonder about how beauty is not always majestic mountains, or plains of waving wheat, but hard formations of rock that have taken thousands of years to reach a sort of geologic perfection.

There are a few entrances into the park with visitor centers and camping and plenty of hiking to enjoy miles and miles of geologic history.

Do You Travel to Areas of Geological Interest?

The Great Rift is a deep crack that stretches 52 miles to the Southeast of the monument. This region of land underwent an excessive amount of stretching. Instead of the land forming mountains during these earthquake activities magma was forced out of the Rift in large quantity.

The magma that flowed out of the Great Rift covered 618 square miles of land. A visitor will be taken to a foreign world of misshappen black rock and miles of black rock desolation as far as the eye can see. 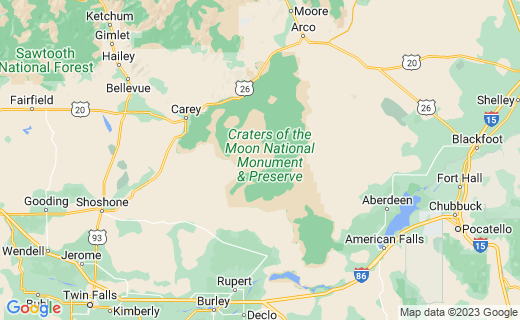 A History of the Park

In 1831 Jean Baptiste Charboneau was separated from the Lewis and Clark expedition and found himself in the valley of the Craters of the Moon. He almost died in the rough volcanic terrain. Shortly after the mistaken voyage of Charboneau an Army Captain by the name of Benjamin Bonneville was ordered to examine the terrain in the valley and to report his findings to the Federal Government.

Following the lead of Bonneville and using the reports that Bonneville had written Isreal Russell created the first in depth geological description of what he called the Cinder Buttes. He wrote his reports in 1901 and not much occurred until nineteen years later.

Around this time an article appeared in the National Geographic titled "Among the Craters of the Moon" and brought the area to the attention of a larger populace.

Since the proclamation signed by Coolridge many roads, hiking trails, and campsites have been created to give access to the public the incredible views of past volcanic activity.

In 1969 NASA astronauts Alan Shepherd, Edgar Mitchell, Eugene Cernan, and Joe Engle used the terrain of the valley to train for planetary exploration.

I hope one day you can make it to the Craters of the Moon National Monument, and enjoy the hiking and the fascinating alien countryside, until then I will see you again with the next installment of "Exploring the Back Roads..."