The City of York

York has been hailed as Britain's most attractive city with the towering gothic York Minster, beautiful streets, small parks and the wide and fast-flowing River Ouse running through its center. While the narrow Shambles is the most famous street in York overhung with timber frame buildings and punctuated with all sorts of shops and cafes. All enclosed by a Norman wall which can be walked for a distance of almost two miles.

It has also been voted the best gastro destination in the UK both for its rich variety of restaurants as well as its amazing history of chocolate manufacturing. Making it home to some of the biggest names in chocolate like Roundtree's Kit Kat, Smarties and Aero along with Terry's Chocolate Orange, all created in the City. In 2014 York welcomed the Tour de France and it couldn’t have had a better start on its second day than in the magnificent city of York. 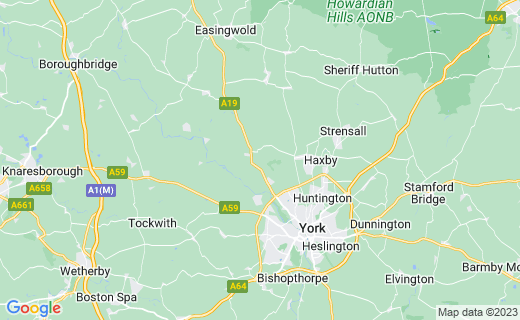 If you are going to stay overnight on your visit to York there is a fantastic B&B called the Willows set in an area of woodland with a huge lake filled with carp; sport for the local fishermen. Then Park and Ride into York and set off to explore the city by following the world-famous Cat Trail.

The Cat Trail consists of twenty one carved cats out of wood, stone or metal, which are strategically placed, climbing up walls, sitting on window sills, or walking along roofs, around the city of York on historic buildings or historic streets. Start this trail in the Shambles with cat number 1 and follow the clues given in a map of the Cat Trail. By the time it gets dark you probably will have found cat number 16 above a Clinton cards shop. You will have visited:

After a hearty English breakfast of eggs, bacon, sausages, mushroom and tomatoes take the Park and Ride into York once again. There you can finish off the Cat Trail from cat number 17 through to cat number 21. Once the cat trail is accomplished successfully it is time for a coffee in the Shambles followed by a visit to the great gothic cathedral of York Minster.

The architecture and attention to detail was amazing. York Minster is the largest of its kind in Europe it is the seat of the Archbishop of York the second-highest Office of the Church of England. The church has taken many forms over the years. The original church was built in six hundred and ninety-seven AD several churches were then built and then destroyed by invaders over the years. The current Gothic structure was started in 1220 and was finally declared complete in 1472. The great east window is the largest expanse of medieval stained glass in the world. The five sister’s window has five lancets, each over 52 foot high. The West Window contains a famous rose window colloquially known as the Heart of Yorkshire. The church needs constant maintenance and it costs twenty thousand pounds a day to maintain it in good order.

You must visit the Cliffords Tower too. You have to climb the long staircase to the tower which is set on the grass mound which formed part of the outer walls of the walled city of York. It was originally built by William the Conqueror over 900 years ago when it played a crucial part in controlling northern England. Over 900 years of history are enclosed within the ruins of this amazing hilltop fortress. The views from the top enabled us to see across the whole of the city of York.

If you get hungry you must visit an amazingly funky place to eat lunch or have a nice coffee or both. It is located in the second oldest house in the city; built-in 1337 on top of the cemetery of St. Sampson’s Church and comprised three floors. The owners say it is haunted but we never saw anything. The prices were cheap by York’s standards but the food was delicious. Everything they sold was locally produced and even the bread was baked locally. The ground floor comprised the kitchen and a small seating area. The first floor was themed to celebrate the lives of famous rock and pop artists who are no longer with us. The walls and furniture were covered in photographs and quotes from the celebrated rock stars. The second floor celebrated classic movies and as with the first floor, the walls were covered with photographs and quotes from classic movies. In York, this is a must-visit place. It’s not far from the Shambles and Kings Square.

In the Jorvik Centre, you will be transported back to 300 AD before the city of York was conceived and the Vikings ruled England. Jorvik is the name of a city of 10,000 Vikings which settled on the land which is now York and remained there until they were kicked out in 1068 by William the Conqueror. In the Jorvik Centre part of this Viking City has been reconstructed and special time capsules take you back a thousand years when this was a thriving community. Visitors numbering over seventeen million over the past 28 years have all journeyed through the reconstruction of Viking-Age streets, as they would have been 1000 years ago. The Viking Centre also offers several exciting exhibitions and the chance to actually stand next to a ‘Viking’. The time capsule travels through life-sized streets, houses and people talking in ‘Viking’ and your senses are assailed by the odours of the goods being made, the food being cooked, animals and rather unpleasant sanitary smells.

On a visit to York, it is worth staying a few extra days to visit the village of Kilburn to have a look at the famous Mouseman's hand made furniture and to see the white horse on the hillside above the village. The White Horse was the idea of Thomas Taylor a native of Kilburn. He wanted a horse cut out on Coulston Scar a hill above Kilburn, to rival those in the south of England. The horse is one of the largest in the country and now stands proudly above the Mouseman’s Visitors Centre. The Mouseman's real name is Robert Thompson. Born in Kilburn in 1876 he founded the Robert Thompson's Craftsmen Limited Company. He was determined to realize his dream of bringing back the spirit of Craftsmanship in English oak. His now-famous mouse symbol is hand-carved on every piece of furniture that was crafted by him initially and now the tradition continues with the current family’s company. The story of the mouse is that one day one of Robert Thompson’s craftsmen commented that they were all as poor as church mice. They were crafting church pews at the time out of oak and so he had the idea of carving a small mouse on each piece of pew the company made.

The visit to the Mouseman should only take a morning which gives you time In the afternoon to drive to the village of Knaresborough in West Yorkshire. Knaresborough is built on the River Nidd on one the side of the gorge which towers either side of the river. Across the gorge is a railway viaduct built in 1851 which is still used by trains today. The castle towering above the gorge offers fantastic views down to the riverside cafes. On the other side of the river opposite the town is a forest that has been turned into a paradise for all those who like ghouls and ghosts. As you walk along the side of the river you may be surprised by the odd ghost, ghoul or zombie walking towards you. While when you pass a cemetery you might spy a hand or a leg struggling to get out of a grave. If you make it beyond the weir you’ll come across Old Mother Shipton’s Cave, the Petrifying Well and a wishing well. Here the mystical powers of the water petrify any object placed under the running waters. You will see any number of toys and other objects just hanging petrified under the well. If you venture in to Mother Shipton’s cave you will hear her cackling laugh and her prophecy that if the road bridge falls thrice the world will end. The bridge has fallen twice so far and The Worlds End pub which stands at the end of the bridge reminds visitors of the prophecy.

I hope you stay around York for another night so as to make time to visit the fabulous National Railway Museum. It has the biggest number of steam locomotives on show in the world. In the Great Hall were the Duchess of Hamilton built in 1938 and one of the first streamlined steam engines. Also on show was Mallard which still holds the world speed record (in 1938 at 132 miles per hour) for a steam train. There were many other steam engines and one, in particular, was huge. It was an engine built in the UK for the Chinese railways where the gauge is much bigger than the UK’s. It was a fine specimen of an engine. Then, of course, there was a replica of Stevenson’s world-famous Rocket, the very first steam engine in the world. There were also engines where the outer shell had been taken off so you could see the insides of the steam engine and how they worked. Also on show were royal carriages from the Victorian era and station memorabilia from the days of steam. Finally, the most modern first Bullet Train launched 1964 which has been donated to the museum by the Japanese.

So there you have it, a visit to the York Cat Trail can lead to visiting many exciting places in and around this famous City. I hope you do one day in the near future.