The Costa del Sol means 'Coast of Sun' .... right? Well, the answer to that is - while there certainly is an awful lot of sun and temperatures in the high 40's in the summer months, there are also plenty of other variations, Costa del Torrential Rain, Costa del Hurricane Force Winds ....even Costa del Snow? You don't think it's possible? Well - read on.

When my husband first proposed the idea of moving to sunny Spain saying 'Imagine waking every morning to blue skies and sunshine', I thought - 'ewww, no, how boring'. I love the variety of British weather where all four seasons can easily be experienced in one day - but I needn't have worried, not only do we experience all types of weather but it's often in its most dramatic form, in fact I didn't realise that it was possible to experience such extremes of weather on the Costa del Sol!

Okay - so we're not exactly a stone's throw from the beach, gazing onto the sparkling azure waters of the Med. We are in a hamlet in the countryside 30 kms from the nearest coastal resort of Torre del Mar and about 550m above sea level but it is still the Costa del Sol even though most people think of sun beds on the sand and pitchers of sangria rather than the local herd of goats and farmers with their donkeys passing by.

We signed the papers for the house on a beautiful December day in 2002. After visiting the lawyer's office and the passing of the obligatory brown envelope stuffed with bank-notes, destined to be stuffed in the buyer's mattress, under the table, we all retired to a restaurant for a celebratory lunch, sitting on the terrace, basking in the warm rays of sun while feeling rather sorry for the folks in the gloom back home - as if!.

There was a fair amount of work to be done on the house before it would be fit for human habitation - although the spiders, geckos and field mice quite happy with it as it was! - so my husband set out at the end of February 2003 to make a start.

I rang him late on the morning following his arrival expecting to hear a progress report on how he'd just finished whitewashing the outside walls and was about to tackle the interior after a light, refreshing cerveza and some bread and goat's cheese on the sun-dappled terrace. Instead, the conversation went something like this (after quite a delay for the phone to be answered):

Him - sounding rather bewildered .... But it's still dark - I was still asleep'

Me - through slightly gritted teeth .... 'Have you opened the shutters?'

Well, so much for getting any work done that day - or the next, or the next. In fact the weather stayed like that through the rest of February, March and on and off for April and May for good measure.

When I came out to join him I could be found wandering about the house muttering to myself 'Costa del Sol? - more like b***** Costa del Lluvia'.*

* No offence meant to anyone from Grimsby - just liked the 'grim' sound of it.

Did you know that wheelbarrows can fly?

No? - well neither did we until after a night of lying in bed listening to what sounded like Hurricane Katrina all around the house.  We went out in the morning to find our garden furniture floating in the swimming pool and the heavy iron wheelbarrow lying on its back 200 metres from where we'd left it.

Some friends had that heavy ornamental cast iron garden furniture on their terrace - so heavy that you were at risk of a serious hernia just pulling it out from under the table.They discovered theirs that morning scattered to the four corners of their garden (it still took two of them to retrieve each item!).  What force of wind was capable of doing that?

We had actually experienced some snow a couple of years before when we'd had a few days of bitterly cold temperatures, down to -5 degrees at one point. Our neighbour who's 76 and lived in the village for the past 40 years said he couldn't remember such cold weather and when it actually snowed one morning he was like a little boy! However, as soon as the sun appeared over the mountain behind our hamlet, the thin covering swiftly melted.

In January 2009 it was a different story. The snow started on the evening of the 10th and right from the beginning started to fall heavily.

Our house is set on the edge of the hamlet and on a busy day - such as a fiesta - we may get half a dozen cars an hour pass along the road at the edge of our field, so we were somewhat bemused to see 30 or 40 cars park up along the narrow road and families emerging to throw snowballs and toboggan on the steep hill opposite.

We decided to get in the car and investigate just why so many were ending up in our hamlet. When we drove down to the main road leading from the coast up to the Sierra Nevada ski resort (a two hour drive away), we discovered that the police had set up a road block and were only allowing those vehicles with snow chains fitted to their tyres to proceed further. Well - as you can imagine - they're not the most commonly sold items on the coast so most vehicles were turned away and ended up heading to the lower slopes of our village where the kids (young and old) could still experience the fun of playing in the snow.

The cars who had been to the higher altitudes were later to be seen driving back down to the coast with snow-men proudly perched on their car bonnets - some even attempt to make it down to the beach to show off their trophies to the sun-bathers.

It was all too short-lived. By early afternoon the snow had all but disappeared although Mount Maroma , the highest mountain in the Sierra Tejeda at 2066m, remained snow-capped until the spring.

Please note all of the photographs in this hub are my own and may not be copied, used or reproduced without asking for and receiving my permission.

A selection of my images are available to buy as cards and prints at my web page on redbubble where I am known as cassiegirl.

For the past few years we had been going back & forth between our home here in Spain and a flat that we'd kept in the UK,  Unfortunately, with the effects of the 'credit crunch', it was becoming an enormous drain on our finances. So, a decision had to be made and in December 2009, having sold the flat, our remaining furniture & possessions were shipped over to Spain.

We'd had four years of very little rainfall and all of the reservoirs in Andalucia were significantly depleted. Our local reservoir, Lake Vinuela, was down to an alarming 13% of its total capacity and we were becoming very worried about the likelihood of severe water restrictions for the foreseeable future.

Our furniture arrived on a sweltering December day just before Christmas. The lorry was able to get as far as the bottom of our drive and then everything had to be either carried up the steep slope by hand or, in the case of the heavier items, hauled up by tractor. As we were in the process of this mammoth task, the first drops of rain fell onto our precious belongings leading to a scramble to find plastic sheeting to cover the items.

We managed to install our furniture in the house in a relatively dry state, but, over the next few days the duration of the rain steadily increased to the point where we had virtually continuous rain for the next three months. On Christmas Eve there was a record fall of rain leading to widespread flooding in Andalucía, and for the first time since we'd been in Spain, we were forced to eat our Christmas lunch inside the house!

We live near the source of one of the rivers that feed the Vinuela reservoir It runs past the bottom of our land and it soon became a raging torrent - in fact it is still running, albeit at a gentler pace, as I am writing this in the middle of July! We use a small bridge to reach the road from our property and, luckily it remained above water - unlike our nearby neighbour who became completely cut off! The water level in the reservoir rose so high that in February the excess water had to be released to simply run off down to the sea.

Still, as I say, I'm writing this in the middle of July, the temperature on our terrace at the moment is 34 degrees in the shade, the land has once more turned from green to a crispy golden brown and, apart from the holidaymakers down on the beach, everyone is once more happily complaining about the unrelenting heat - roll on winter!!!!

Are you surprised by the weather in some of these photos?

Some useful books to enjoy 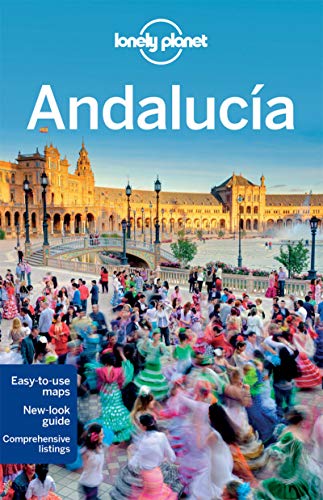