Tours in Florence - The English Cemetery

Any great fan taking a tour in Florence will visit the Duomo, the Uffizi, Ponte Vecchio, all wonderful places but I would suggest a walk across town for a peaceful trip around the tranquil grounds of Florence's English Cemetery in Piazza Donatello.

Wondering around the outside walls on morning trying to get in I spotted a nun weeding the graves. In my cartoon Italian I tried to explain that I wished to look around and then in a lovely home counties English accent Sister Julia Bolton Holloway said "just ask Asunta at the gate, she'll let you in". a classic.

If you have seen "Tea with Mussolini" you will instantly recognise the cemetery, packed full of caskets, mausoleum and tombstones to those who passed away in nineteenth century Florence. It has some of the great poets, artists and thinkers of their age here, the dedications are touchingly, sad, grieving mothers, desperate fathers all represented in the cold white marble of the area. All trying to understand their loss.

By the early nineteenth century Protestantism had taken a hold in Florence but the nearest place you could be buried however was Livorno just south of Pisa. So the Swiss Evangelical Reformed Church set about buying some land on which to build a cemetery in Florence. The Grand Duke, Leopald II for the sum of 15,124 lira, sold them the little hill; in fact a medieval rubbish tip, just outside the Porte a Pinti. So began the Cimitero Protestante di Porta a Pinti in 1827.

At first the local Catholics were non to pleased and the first burial services the graves were destroyed. The local football team were none too happy either as the hillock had provided them with the perfect grandstand. Gradually though the cemetery established itself, became accepted and grew.

Naming of the Graveyard

Officially known as the Protestant Cemetery of Porte di Pinti but as Florentines associated Protestantism with being English, and due to the large British Ex-pat community buried in the cemetery it became know as the Cimitero degli Inglesi.

In total there are 1,409 individuals from 16 nations interned here of whom 760 are British, 433 Swiss, 87 Americans, 84 Italians and 54 Russians. There are grave markers to Australians, Poles, a Nubian slave girl, rich aristocrats and paupers, the very young and the old. All sections of society are represented .

Over the years the visiting relatives planted box hedges, roses climbing on frames over their infants graves, myrtles and laurel. In the British tradition Yew trees were planted, tall Cypress trees held the hill firm, Cedar and Cherry trees, as well as a great Lime that shaded the gatehouse.

Film Director, Franco Zeffirelli often describes picnics here in this childhood, eating wild strawberries, Joanna and Susan Horner in the 1880's on their walks in Florence talk about "the little garden of roses and other flowers". Artist Hiram Powers often visited the graves of his three children here and would say how "in spring and summer the place blooms with flowers," a living garden of the dead. Sadly in a moment of madness and not completely understanding graveyard traditions the Italian authorities ripped up masses of the bushes, destroyed the hedgerows and cut down many of the trees. Plans however are well underway to replant the gardens and return it to its former glory.

The Good and the Great

The cemetery has many talented, thoughtful and politicised people from around the world buried here, a testament to their spirit and Florence's inspiration. Those artists, poets, doctors and diplomats remembered include:

The cemetery came under the protection of its royal supporter the King of Prussia for whom the monument was erected in 1858 at the cemetery's centre, a tall column surmounted with a cross with lilies and roses. One of the most poignant statues is of a grieving Mrs Landor draped over her son Arnold Landor's grave. While the words of Elizabeth Barrett Browning to her dear friend Isa Blagden sum up her feelings of loss. " And here, among the English tombs, In Tuscan ground we lay her".

Closure and the Future

In 1869 with the demolition of the Porte a Pinti and the rest of the city walls the cemetery now came within the bounds of Florence and under the Code Napoleon it was illegal to have a place of burial inside a town. So the fate of the English Cemetery's short 50 year history was sealed and In late 1877 the last funeral was held.

After 130 years of neglect and abandonment it is finally getting a new lease of life and with Sister Julia providing the driving force it should eventually be returned to its former glory. The Gatehouse where the Shakespeare sisters Beatrice and Claude; Williams last direct descendants lived has been turned into a library and trees and shrubs are returning too. It houses collections from those many famous people whose final resting place is The English Cemetery in Florence.

Aerial View of the English Cemetery 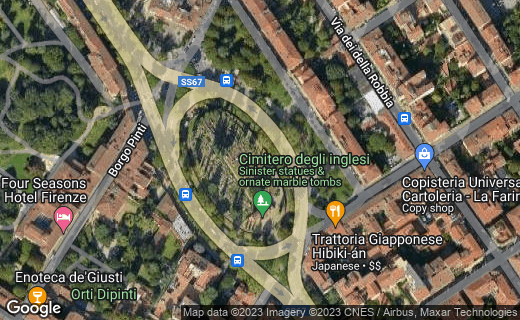 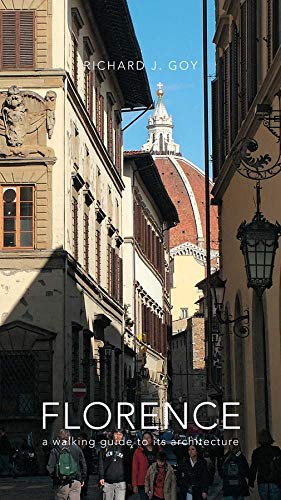 Florence: A Walking Guide to Its Architecture
Buy Now