Free Things To Do in West Sussex

Even people who live in West Sussex are sometime surprised to realise how large this county is. It stretches from just south of London's Gatwick Airport to the south coast of England, and its western edge is just few miles east of Portsmouth, while to the east it is close to Brighton. It is home to the South Downs National Park, which offer quiet hill walks near Goodwood Racetrack. West Sussex is also home to beautiful cathedrals cities and towns as well as some of England's most popular beaches. In an era of increasingly more expensive parks and "experiences" West Sussex has a wealth of simple ways to entertain all the family for free.

This article cannot possibly cover everything West Sussex has to offer, and therefore focuses mainly on the area around Arundel, Chichester and Bognor Regis, with additional information about beaches in West Sussex.

Things to do in Arundel and Swanbourne Lake

Arundel is one of the most beautiful towns in West Sussex. It is small compared to some of the other towns and cities, and easy to make your way around. Although there is a charge to go inside the castle shown on the right, just looking at it from the outside is awe inspiring! Arundel also has a beautiful cathedral, that is free to visit.

But what we most love to do in Arundel is to stroll around the town, checking out the antique shops and having tea and scones in one of the tea rooms. Usually we do this after we have taken a walk around the beautiful Swanbourne Lake, which is a short distance from the town.

Swanbourne Lake is free to visit, and is across the road from the Wetland and Wildfowl Centre. The Centre is well worth a visit, but there is an entrance fee so if you are on a tight budget, the lake is a better bet. You won't see quite as many birds as in the Wetland and Wildfowl Centre, but many birds have made their home on Swanbourne Lake, including some Centre escapees! The photographs on the lake were taken in January, and some birds remain there all year round.

The swans and other birds mainly reside near the gates, but it is worth straying further and taking a walk all round the lake. The walking is easy enough for small children, with only gentle slopes, and it takes you through open pathways and wooded areas. It can be a little muddy in places after heavy rains.

If you don't mind spending some money try:

Arundel Castle, the Arundel Lido (open air swimming pool) or a tea room (our favourite is Belinda's, which is in a 16th century building. The tea rooms at Swanbourne Lake itself is also very nice.

Chichester cathedral was built in the 11th century and because the surrounding countryside lies low, its spire can be seen from miles around, and can even be seen from the sea. It used to be a landmark for sailors before the days of navigational aids.

The cathedral is right in the heart of Chichester, just off the Market Cross, where the 4 main streets meet. As well as being a beautiful building in its own right, the Cathedral house a wealth of art, including a painting by Graham Sutherland and a window by Marc Chagall. As well as these modern works of art there are pieces from as far back as the 12th century.

Chichester City walls were originally built by the Romans, but although they still follow the same route only the foundations are now Roman. The walls themselves were built in medieval times, and are in a good state of repair with walkways along the top.

A walk along the canal is relaxing and fun, and there is a very good chance that in season you will see an abundance of wildlife. Deer and foxes live along the edges of the walk, and egrets and kingfishers live on the waters. You might even be lucky enough to see one of those birds catch a fish. This walk is accessible for pushchairs and bicycles.

The canal towpath is 4 miles long, so a return journey from Chichester to West Wittering might be too much all in one go, but when you reach West Wittering you can relax on the beach - read the section on West Sussex beaches for more information.

Or you could simply do as we usually do, and walk along a section of the canal.

There are 22 beaches in West Sussex, and many of them are very popular. Most of these beaches are shingle beaches at high tide, and as the tide goes out vast stretches of sand are left behind. This is because the water shelves very shallowly - and that means the sea is very safe for families.

The most popular beach is probably West Wittering. This is one of few West Sussex beaches that is sandy throughout, and is considered by some sources to be one of the ten best beaches in the UK. It lies about 8 miles to the south-west of Chichester and if you don't have a car it is possible to get there by bus, but most people drive. Although the beach is free, the car park is not, so if you want to visit the beach totally for free you will have to cycle there! Parking prices vary depending on the season. If you only want to make a short visit, go in the afternoon - in the morning you have to pay a full day's parking, but in the afternoon the charge is reduced.

The beach has a café and a windsurfing club. Both have seasonal variations in opening hours.

Jointly, West and East Wittering are known locally as "The Witterings."

Bognor Regis, known locally simply as Bognor, is primarily a seaside resort and is much larger than either of the Witterings. Its population is around 22,500, but it runs into Felpham on its east side and Aldwick on its west side, so it the urban area is larger than you might expect.

Bognor has been home to a Butlins Holiday Camp since 1960, and holidaymakers also come to the many apartments and Bed and Breakfast hotels along the seafront. The beach stretches from Felpham right along to Aldwick, with the busiest section being in Bognor itself.

A Walk Along the Beach

At the Felpham end of the beach, there will be a few people sunbathing and playing, and as you walk towards Bognor Regis there is a play area for children. All along the beach you will find cafés and kiosks selling everything from ice cream to body boards. Like many of the South Coast towns, Bognor Regis has a pier, but in spite of having Listed conservation status, parts of it had to be removed due to safety concerns after storm damage.

As you walk westwards towards Aldwick, the crowds will thin out again and you will meet the occasional dog walker.

A particular feature of the beaches in this area are the beach huts. Many of these fell into disrepair a few decades ago, but have now been revived. Generally these are used for storage and for changing in, but some have been elaborately kitted out with cooking facilities by their owners.

When you find the part of the beach where you would like to settle down for a few hours, you can enjoy many hours of beach activities at no cost. For ideas, read my article Fun Beach Activities and Games For Children.

The river Arun reaches the sea at Littlehampton, so as well as another beach there are many boats to admire in the harbor.

Getting to Bognor Regis and Littlehampton

Trains run regularly from London's Victoria station to Bognor Regis. To get to Littlehampton, you take the train for Bognor or Chichester and change at Barnham.

Beach Huts are a familiar sight in West Sussex

Other free actiivities in the Bognor Area

The photographs opposite are of an outdoor gym in West Park in Aldwick that is free for anyone to use. Surprisingly perhaps, unlike the gyms that cost half your salary, this gym is almost deserted, so you get your pick of equipment. You will also find more exercise equipment at Bognor Regis seafront.

At the other side of Bognor is Hotham Park. Here you can stroll around the gardens among beautiful flowers or watch people have fun on the minature railway.

If you don't mind spending some money:

Try that minature railway or the putting green in Hotham Park.

Buy a body board and have fun in the sea.

Try some of the activities at Bognor seafront, such as crazy golf or the giant inflatable slide (this is only there in summer.)

Other places to visit

Some other good places to visit are the South Downs national park. One great place to start a walk is at The Trundle, near Goodwood Racetrack.

The village of Bosham is also worth a visit. This has a craft market which you can browse, as well as cafés, but arguably of most interest is Shore Road, which runs along the water's edge. This road is clearly marked with signs that alert motorists and others to the fact that the road floods each high tide. Presumably, the motorist in the photo didn't appreciate this means the road disappears.

The other main attraction at the harbour are the ducks. These are very familiar with people and will be delighted if you feed them. And they don't care a bit that the road floods! 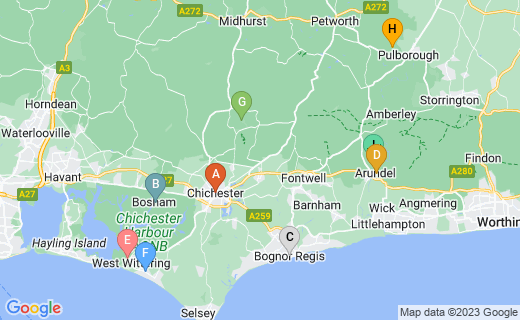 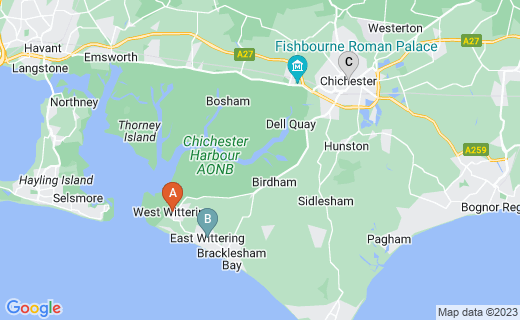