La Souterraine is located North of the Limousinarea in France. It is a small town with over 5000 habitants. We arrived there one day almost by accident, as it was a sunny, wintry day and we were looking for new villages to explore near home.

We knew that la Souterraine had a train station as this is a main stop for the Limoges' train. What we didn't know was that it was a beautiful ancient town. It was our first time there and it was a nice surprise to see flowery road entries, old fortified walls and archways.

Commerce in the village is basic, a baker, a butcher, a few boutiques, flower shops and newsagents all along the main street. However, there is a weekly market in the town centre where you can buy from the local producers. There is also a cinema, a few restaurants and several picturesque cafes with their terraces on the main streets. An inviting place for a cake and a coffee on a sunny day. 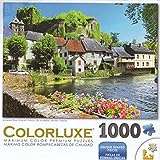 Among its tourist attractions, there is a church dating from the 11th century. The church was built by the Saint Martial monks and it was restored in 1850. This used to be a stop for the Santiago de Compostela pilgrims. On the outside there is a gallo-roman sanctuary.

You cannot miss this. Built during the 13th century it is an entrance of one of the ancient walls surrounding the town. Almost 20 m. tall, the entrance is supported by two towers. This peculiar building was a prison until 1860.

The river Creuse is always present, not far away from the town and makes of La Souterraine a good place for kayaking, sailing, canoeing and fishing.

Flying there: to Limoges Bellegarde airport. Daily flights from the UK couldn't be easier. The airport is 60 Km from La Souterraine.

Alternatively, the fast and efficient TGV train service operates from Paris to Limoges. It takes about 2h 30 m. from Paris.

Just coming out of La Souterraine we decided to visit the village of Fromental. The name in the map attracted my attention as it remainded me of Fromage (cheese) and Emmental. And as I tend to think with my tummy... we followed de road to Fromental.

Unfortunately, there was no cheese to be seen in this tiny village of less than 500 people. Fortunately though, there was an old church with magnificent stained glass windows, and facing the church we found a fairy tale castle. The Château de Fromental, a fortified manoir dating back to the 14th century. I am not sure if we were meant to enter or not, but the gates were open and there was not a person around the village to ask, so we just entered and toured around the gardens.

On our way back from Fromental to the main motorway, by accident we found the Dolmen de Bagnol. An ancient construction like many scattered in France and the United Kingdom dating from the early Neolithic period (4000 to 3000 BC). A dolmen is a type of megalithic tomb usually consisting of at least three upright stones -megaliths- supporting a large horizontal stone. This gives the impression of a giant stone table.

When the night was approaching and we were starting to get worried about not finding our way back, I decided to knock on a door and ask for directions. I was lucky enough to find a very nice lady who not only drew a map but also tried to explain the directions in English. So with our homemade map we started our way back. But just when we thought that we were lost again the lady who had drawn the map for me surprised us by driving behind us! I suppose she was a bit worried that we might not find our way back, or maybe she had made a mistake on her map and just tried to catch up with us to correct it... Who knows. But thanks to her concern and help, we found our way back. Who said the French were not friendly?

Dolmens and other Monoliths in Europe