If you are ever in the Los Angeles or Bakersfield area and are looking for a nice quiet place to get away for a bit, you might want to consider a trip to Ft. Tejon. There are a few things to see, but mostly it is a quiet place, where you can relax and even have a cookout. I think you might need to ask for permission to picnic however. There are nice views of the hills, and if you can mentally block out the noise of the traffic from the nearby highway 99, you can definitely imagine yourself being there in the 1800s. 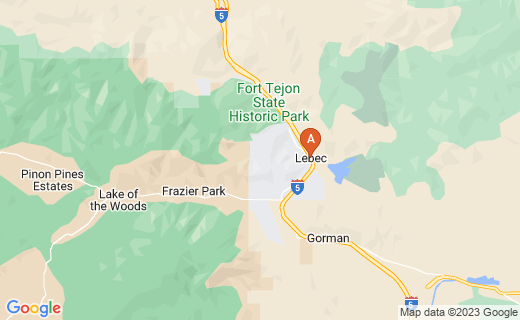 Ft. Tejon is quite scenic and a nice place to spend an afternoon.

A Rather Tumultuous History

One thing for certain, the park is honest in its description of the historic origins of the West. There were many conflicts between the native tribes, Mexicans who lived in the area, Californios as they were called and the White settlers who were moving westward. Most of the European settlers who moved west were motivated either by the search for gold, the desire to find new lands in California, or to help establish a country that was inspired by the idea of Manifest Destiny. There were actually people who believed that it was God's desire that the United States be a country designed from one coast to the other.

Ironically, the Ft. served many purposes: it was the headquarters for the Dragoons outfit, this was a location that served training purposes for officers and soldiers alike, it was designed as a refuge for travelers along the coast, it served as a police force to settle disputes between local dwellers of all backgrounds, and it mainly operated to protect the Native tribes who had been forced to relocate to nearby areas. Natives were often under attack from the white settlers who continued to encroach upon Indian territories in search for agriculturally rich soils, food and game and places to set up housing shelters.

There is a lot to learn from a visit to this place and you can take a small step back in time. If you are someone who is interested in history or have a day to get away with your family, you might want to consider Ft. Tejon. There really are not many nearby amenities - food, shopping, restaurants - at least on the grounds, so you might want to come prepared. Younger kids might be a little bored with some of the exhibits because there really isn't anything interactive. A lot of displays in the main house on site; requires some reading too.

I hope to give you a bit of an overview, express some of my own opinions and generally speak about this place favorably, as a place to visit on a day trip.

These details were taken directly from the Ft. Tejon State Historical Park brochure (not everything listed is included)

1827 Jedediah Smith was in the area

1830 Increase of trapping and hunting activities - Kit Carson in area

1858 Butterfield Overland Mail Service was established at Fort Tejon. Passenger Service to Los Angeles on Monday and Wednesday for $12.00 one-way fare. to Visalia on Tuesday and Thursday for $15.00 one-way fare.

1859 Ox-powered sawmill was build at the Fort. On November 17, twenty-seven Camels arrived at Fort Tejon after being surrendered by Edward F. Beale after keeping them for two years.

1861 June - Garrison of troops was transferred to Los Angeles to prevent trouble during the Civill War. Dragoons were reorganied to become First United States Cavalry. The camels sold at auction by the United States Quartermaster in Benicia. Mail service at Butterfield Stage Office was discontinued.

1863 Ft. Tejon was occupied by California Volunteers. Most United States troops had been transferred. August - Indians were transferred from Sebastian Indian reservation to live at Ft. Tejon.

1864 September 11, Fort Tejon was officially abandoned by the United States Army. Samuel Bishop purchased the Fort and turned the Tejon area into a sheep ranch.

1949 Restoration of the fort was begun.

One of the most substantial things that comes out of a visit to Ft. Tejon is the history between the white settlers and the Native residents who had lived there for many years.

In 1858 the Indian Commissioners had established 18 treaties with California Indians and provided reservations in exchange for the state. Many whites objected to the United States Senate's refusal to ratify these agreements. Natives on the other hand, felt very betrayed because they had already signed away their lands.

These sorts of disputes continued throughout the United States. In 1854 there was a gold strike on the nearby Kern River which attracted over 5,000 miners into Tubatulabal and Yokut territories. In 1856 soldiers from Ft. Tejon were sent to nearby Keysville because whites feared an extension of the Rule River Indian uprising, but it did not occur.

Californios - Mexicans or persons of Spanish descent who were born in California -were often marginalized by whites who moved into the California territory. As the natives were displaced, Californios were accused - often unfairly - of committing crimes and lynched. The many acts of treason and genocide, often based on race, were tolerated by the newly established American government. Ironically, Ft. Tejon was designed to protect Indians and some Californios from exploitation and harm that would be perpetrated by white settlers.

Some interior views of the main ranch house at Ft. Tejon

Some American soldiers seemed sympathetic to the plight of Native Americans

"The stories that i have hear of the outrages perpetrated by whites would be incredible were they not well vouched for. The Indians are naturally quiet and would continue so if let alone."

Some Calvary outfits and weaponry

Ft. Tejon was mainly a location for the soldiers who to protect Native Americans from whites and to support the efforts of Indian agents. As a regional police station the location was a place where the members of the community - Americans, Californios, Mexicans and Indians - were able to seek protection and achieve compromises between conflicts that arose.

In 1857 they were sent to Los Angeles when Sheriff James Barton was murdered and assisted in keeping the peace. During this time, the Juan Flores gang who were the ones deemed responsible for the policeman's murder, were lynched by Americans and Californios.

Most of those stationed at the Fort in the 1850's Army officers were glad for their assignment. Many were graduates of the West Point Military Academy and had not been out West before. During the Civil War, some of the officers were sent to assist in the war efforts - four of the generals assisted the North while five were sided with the South.

Beale was a businessman who was active in the area that would become Bakersfield in the 1850's and 60's. During this period of time, American expansion west was justified by the idea of Manifest Destiny which was used to oppress Natives in the name of God.

Beale had a 48,000 acre Rancho La Liebre in 1855 and in the 1860's managed to three additional land grants which were originally Mexican Territory and expanding his holdings to over 200,000 acres.