Fun at Lagoon in Utah

Many people conjure up images of Monument Valley or the Salt Lake Tabernacle Choir when they think of Utah. There is no Disneyland in Utah, but they do have Lagoon! It is the “place to go” for local families who want to take a break from the chores and have a blast.

Recently, my son announced we were going to Lagoon. Our grandchildren were so excited, they were beside themselves. The day started out a bit rainy, but by the time we got to Lagoon, it was just sprinkling.

The interesting thing about Lagoon is that I felt the same way about it when I was a little girl. Yes, it has been around since 1886. No, I am not that old, but when we took our grandchildren, I recognized some of the rides I had ridden on several years ago.

Because of the four seasons in Utah, the park is open late March and up to mid October (weather permitting). One thing that is great about Lagoon is that they allow you to take in coolers and food and water for lunch, since you will probably be there much of the day. 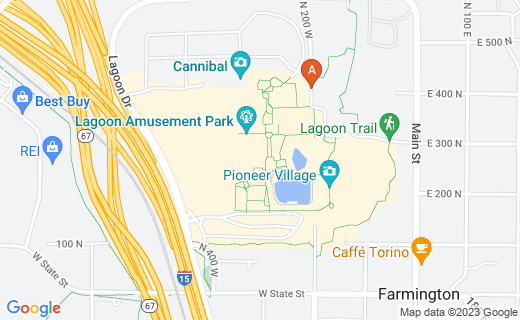 Have you been to Lagoon?

Historically, the park was originally called “Lake Park.” It was along the shores of the Great Salt Lake until it started receding. It was eventually moved two and a half miles to the present location on the banks of a nine acre lagoon.

The first thrill ride was Shoot the Chutes. Then they built the scenic Bamberger Railway and the carousel with hand carved horses and other animals. The same carousel is still in operation and a zoo with lions, tigers, deer, ostrich and other animals has been installed and can be viewed by those who ride the train.

There was a Dancing Pavilion with the Big Band Era from the ‘30s to the ‘40s. In October 1953, Lagoon was on fire, literally. The roller coaster was on fire and firefighters saved the carousel by spraying a constant stream of water over its roof. Much of it was rebuilt and included rides for all ages.

Ella Fitzgerald, Louis Armstrong, Johnny Mathis, the Glenn Miller Orchestra and Rock and Rollers and other famous acts entertained the guests of Lagoon. An Opera House was added and presenting plays and Broadway hits.

Some of the famous people that have played at Lagoon include Nat “King” Cole, Pat Boone, Paul Revere and the Rainders, Ray Charles, Roy Clark, The Doors, The Everly Brothers, The Lettermen, The Mamas & Papas, The Rolling Stones, and I could go on and on.

In 1989, Lagoon added Lagoon A Beach Waterpark. It has a lazy river, pools and many other activities.

Besides children rides like those at Mother Goose Land and Bongo’s Bay, there are thrilling rides like Wicked (biggest roller coaster), and some rides only for the most daring, like Air Race, Bombora, Catapult, Cliffhanger, The Rocket, The Spider and The Bat. Lagoon’s Colossus: The Fire Dragon, was chosen as one of the top 10 coaster rides in the country by People Magazine in 1984.

There are picnic pavilions throughout the park. They also have franchises and offer catering for groups. They also offer usual amusement park fares such as cotton candy, caramel apple and churros.

The newest rides at Lagoon are the Red Rock Rally, which includes off-road themed vehicles and the Tipsey Tea Cups, where rides spin in their individual cup at their own pace.

Lagoon has been around since I was a kid, and it was fun to see my grandchildren enjoy some of the same rides I went on years ago. It has only gotten better with more rides and better services. Be sure to visit Lagoon if you are headed for Utah.