Sunlight Could Not Get Through the Gaustatoppen Mountains

Rjukan, Norway is a small town at the foot of the Gaustatoppen Mountains. Until now, they have been unreached by the sun for 5-6 months out of the year, which happens to be during the winter. This makes for really cold and depressing winters for residents of Rjukan.

After all, Rjukan is known for having the best skiing, ice climbing, and mountain biking in all of Norway - but residents are willing to trade that reputation in for a little more sunlight in the winter.

To solve this problem, giant mirrors (called Solspiel for "sun mirrors") were installed at the top of the mountains to reflect this precious sunlight onto the streets of Rjukan, Norway in their market square. As you can imagine, citizens of Rjukan are now dancing in the streets in the sunlight during the cold, winter months.

As of October 13, 2013, the giant mirrors were dedicated and put into commission at an unveiling ceremony. 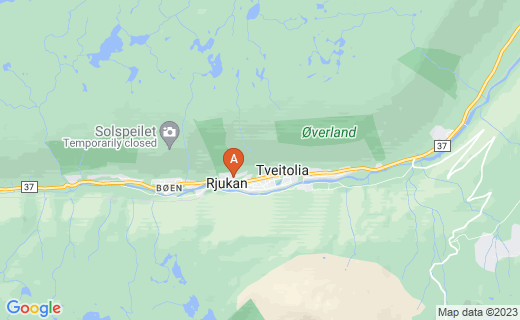 Sunlight Reflecting in the Rear Window

How Much Did it Cost?

The Mirrors Bring Sun to a Dark Valley

Until this giant undertaking of installing three large mirrors, this small town of 3,400 has literally been in the dark 5-6 months out of the year because of the massive Gaustatoppen Mountains.

The Mirror Idea Has Been Around for 100 Years

This idea of placing mirrors on the mountain has been talked about for 100 years in Rjukan, Norway. It wasn't until 2005 that Martin Anderson - a resident of Rjukan - launched "The Mirror Project." The website for this project goes into detail about installed the heliostats, which is the technical term for these giant mirrors.

A Giant Gondola Was Built Instead of the Giant Mirrors

The founder of the town Rjukan - Sam Eydes - was the first came up with the sun mirror idea in 1913, but was not able to start the ambitious project. Rather than build the giant sun mirrors, the successors to Sam Eydes built a gondola called the Krossobanen in 1928 to transport residents of Rjukan to experience the winter sunshine. This gondola is still in operation today.

The Krossobanen is able to transport thousands of people every year to the mountains where sunlight shines through.

The Technology Behind the Heliostats

The heliostats were placed on top of the mountain (at an elevation of 742 m above sea level) and are driven by solar-powered computers that tracks the sun's movement over the horizon. The giant mirrors then reflect the sun's rays into Rjukan's market square.

These three giant mirrors shine a single beam of sunlight 2,100 meters into the town in the valley below.

Rjukan, Norway was coriginally created by the Norwegian industry and planned out by the best architects and engineers. Rjukan was referred to as a "company town" as it was created Norsk Hyrdo in the hydro energy industry

Fact: Rjukan, Norway was nominated as a candidate for UNESCO´s World Heritage Site list. This nomination will be formally announced on the official list in 2015.