Prague is the Capitol city of the Czech Republic. Its also the largest city in the Czech Republic. Sometimes it is also called Praha. This is probably the most beautiful city in all of Europe. Unlike most of Europe Prague received very little damage from World War II. It is also the historical capital of Bohemia proper. The currency is the Czech Koruna which averages about 20Kr to 1 US dollar. The people are very friendly and although English is not their main language most people in the major cities speak English pretty fluently. Prague is a large tourist city and can get quite crowded in the summer when the weather is nice. It can get quite cold there in the winter, -25C, but you can get much better travel deals in the winter and its not crowded at all. You can pick up a great easy to read tourist map of Prague almost anywhere and I highly suggest you get one. 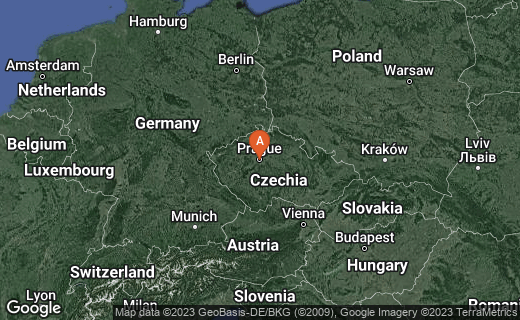 Prague is one of the most beautiful cities in the world! From Cleveland it was a very long over night flight. Once I arrived it was easy to navigate through customs and to the taxi area. It was about an hour drive to the hotel from the airport because the taxi took multiple people to multiple hotels. I stayed at the Hotel U Prince. This is an amazing old hotel and has great rooms. The hotel key was a very heavy brass lion head that was very neat. One of the reasons I stayed there was it is right across the street from the Astronomical clock. This is the third oldest astronomical clock in the world and the oldest working one. The hotel also provided a free breakfast for people who stayed there. The breakfast was awesome!! eggs and meat and cheeses. Perfect breakfast. Everything around the hotel is amazing. The architecture in that area is phenomenal.

A lot of the buildings that I toured were cathedrals. Most of them were free to tour. Now I am not a religious person by any means but these cathedrals were breath taking inside and out. The artwork on the inside of the cathedrals is simply amazing. Prague also has a big Jewish area that was not destroyed by the Nazis in World War II so it was really neat being able to go through these old synagogs. Even these were very elaborate and ornate with amazing murals on the walls. When going back and forth between the Jewish buildings and the Cathedrals try to remember to pay attention which you are entering. The Jewish ones you need to cover your head and the cathedrals you need to remove your hat. The old Jewish cemeteries are crazy. The tombstones are literally stacked on top of each other and there are very small paths to walk in between them. Those cemeteries are nothing like I have ever seen.

Eventually I made my way to the Vltave river. There are 18 bridges that cross the river including the Charles Bridge. They are all very ornate bridges and I spent about an hour crossing the Charles Bridge the first time just admiring the statues. Once across the bridge it is a decent walk up a steep hill to Prague Castle. This is also a must see. The castle is amazing and there are tons of museums full of art work and other things up there to check out. I could have spent a week just in the Castle area! One of the Churches in the castle had an orchestra playing one evening. it was a great experience! There were 6 or 8 people playing stringed instruments around the alter. It was unforgettable! The views of Prague from the castle are completely amazing.

On the other end of town in the more modern area is the Natural History Museum. If you are into this kind of thing you definitely need to spend a day here. Everything is labeled in Czech and Latin ( genius and species) so if you are familiar with scientific names of the specimens you will know what they are, but if not don't worry its still a great museum. This museum had the best geology collection I have ever seen!! Room after Room of rocks and minerals! I could have spent an entire day just in the Geology rooms, but I like rocks.

There is so much else to do in the historical area that I just cant' remember. 10 days was definitely not enough time there!

If you ever visit Prague you must dedicate a day for a trip to Kutna Hora. This is a small town maybe an hour and a half to two hours away from Prague. I just walked up to one of the tourist kiosks and booked the trip. I got in a van with a bunch of other people, a driver and a tour guide. The tour guide explained a lot of things about Prague as we traveled through the city and about the Czech republic as we traveled through the country side. We stopped at 2 cathedrals along the way that were really neat. Then we arrived at Kutna Hora.

The reason to take this excursion is to visit the Ossuary. This is also know as the Bone Church of Sedlec. This is a church that is decorated with the bones of between 40,000 and 70,000 people. I have never seen anything like it and it was a humbling experience. In 1278 the abbot of the Cistercian monastery went to the holy land and returned with a small amount of earth from Golgotha and sprinkled it over the abby cemetery. Because of this act the cemetery in Sedlec became a desirable burial site throughout Central Europe. After the Black Death and the Hussite Wars 10s of thousands of people were buried there so the cemetery was greatly enlarged. A Gothic church was built in the center of the cemetery to be used as an ossuary for the mass graves unearthed during construction and to make room for new burials.The task of exhuming skeletons and stacking their bones in the chapel was given to a half-blind monk of the order. Not only did this monk stack the bones but the entire church was decorated with them including bone chandeliers and candelabra.

Unfortunately because of the stops at the beginning and the time it would take to return to Prague we were only able to stay at the church for about 45 minutes but it was completely worth it. I have never seen anything like this church. The Bone Church of Sedlec is worth the trip to Prague by itself!

The rest of Prague

Besides all the historical attractions and cathedrals, the castle and the bridges there are lots of other things to do. Liquor is pretty cheap there and you can buy real absinth. The Czech republic is also a huge producer of amber. There are jewelery chops every were with great selections of high quality but cheaply priced amber jewelry. You can negotiate the prices a little with some of the shop owners. If you are not of the faint at heart I also recommend checking out the torture museum if you can find it. I ran across it by accident on the way to the bridge from my hotel. The ghost museum was interesting as well.

The food in Prague was excellent. I never had a bad meal once. The food is also pretty cheap. Even the street meat is excellent! Beer is also cheap and if you like beer you should try a few of them there as they are the home of the Czech Pils.

10 days was not enough time to spend in Prague and I am looking forward to returning there someday. There is so much to see and do. I was out of my Hotel by 7 am every morning and never returned until 9pm at the earliest. You will not run out of things to do when you visit Prague!

Thanks for reading my hub!! I hope you enjoyed it!