One of the treasures of the outer Cape Cod region is Highland Light, in the town of Truro. The lighthouse, also known as Cape Cod Light, is both the oldest and tallest lighthouse on Cape Cod.

Highland Light, which is listed in the US National Register of Historic Places, remains an active US Coast Guard aid to navigation, although today the operation is fully automated. Its beacon remains one of the brightest lights on the New England coast.

The first lighthouse in the Truro Highlands area, a wooden structure, was built in 1797. That building was replaced in 1857 with the brick structure currently standing. A keeper's house, built at the same time, now houses a small museum and gift shop.

In the early part of the 20th century, Highland Light was the brightest lighthouse in America. The lamp and lens system have been upgraded several times over the years, the current optical system being the VRB-25, which is the US Coast Guard standard for short-range navigational aids.

Highland Light originally overlooked the Atlantic from a position 500 feet away from a cliff's edge. By the 1990s much of the coastline had eroded, and that distance had narrowed to only about 100 feet. In 1996, the International Chimney Company, a company with extensive experience relocating historic structures, moved the lighthouse an additional 450 feet away from the cliff.

A stone marker sits at the former position of the lighthouse, and nearby an observation deck has been constructed that offers a view over the cliff to the shoreline below, and out into the Atlantic Ocean.

Part of the US National Park Service, the Cape Cod National Seashore was created in 1961 by President John F. Kennedy, and covers 44,600 acres.

The park runs from Chatham all the way to Provincetown, and includes 40 miles of pristine beaches and numerous historic, cultural and natural sites of interest.

The lighthouse is surrounded by a 9-hole golf course, which opened in 1892, making it one of the oldest on the east coast. Highland Light Golf Course offers golfers a fabulous view of the Atlantic Ocean, and is one of the most authentic Scottish links style golf courses in America. Fans of the course are pleased that, because it is part of the Cape Cod National Seashore, it will likely never be updated.

The observation deck and grounds around Highland Light are open year-round. The lighthouse itself is open to the public from May through late-October, with 25-minute guided tours given several times daily. Unique full-moon tours of the lighthouse are also offered during these months.

Outer Cape Cod has a number of must-see attractions, and Highland Light is among the best of these. The lighthouse is very easy to reach from Route 6 (the Mid-Cape Highway), and travelers to the outer Cape should definitely make it a part of their visit. 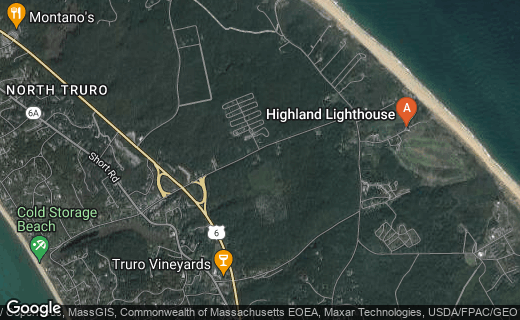