Flat and moderately easy, Ka'ena Point trail leads to Ka'ena Point on the northwestern tip of Oahu and runs along an old sugar train track that once connected Wai'anae to Hale'iwa. The two and a half mile trek to the Point nestles against a panoramic Pacific vista that between November and April is often the playground for breaching whales. Winter is also albatross nesting season and their sanctuary lies within the Point. Hawaiian monk seals are known to bask along the coral strewn shore of this remote tip throughout the year. You can approach from either the Wai'anae or Mokule'ia side, where route 93 and route 930 end and plentiful parking is available. Make sure you lock your vehicle and take your valuables with you. 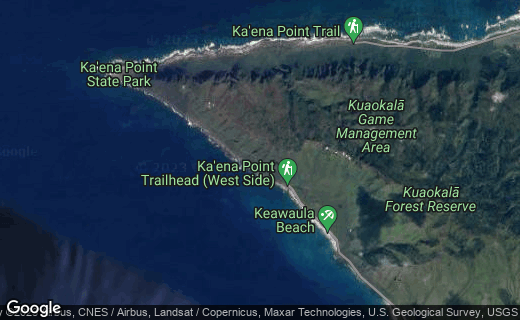 Bring binoculars and a zoom lens camera as federal regulations prohibit humans to be in close proximity to humpback whales, albatross and monk seals. As you hike towards the Point, scan the ocean for boats that will be watching for whales. It takes a keen and patient eye to catch a quick tail or spout on the horizon.

Because the albatross is a ground nesting bird, dogs are prohibited from Ka'ena Point. The chicks are completely helpless and grounded as their parents fly off to forage for food. In 2010 a wall was erected to help keep rats and other wildlife out of the Layasan albatross nesting grounds and from eating their eggs. The furry brown babies blend into their surroundings and look nothing like the adult bird. Wisdom, a Layasan albatross is the world's oldest known bird at 60 years. It was world news when she survived the 2011 tsunami generated by Japan's earthquake.

Monk seals are one of the most endangered species in the world with only 1100 remaining in our oceans. Mankind's history of hunting the monk seal for it's pelt and oil and sharks ongoing hunt for the monk seal as food, are just two of many factors contributing to their demise. Hawaiian monk seals are protected under two different federal laws and violations can be as high as $20,000. Under no circumstances approach a monk seal, staying at least 100 feet away.

The leeward side of Oahu is known for its unrelenting sun and occasional strong winds; There is no protection from the elements on the trail. Bottled water, sunscreen, a brimmed cap and other hiking gear will make your journey more comfortable. Approaching from route 930 on the eastern/Mokule`ia side is easier as you don’t have to climb up a cliffside as you do from the southern/Wai`anae side, but driving down route 93 on the Wai`anae coast is a panoramic experience. Always be aware of the ocean and respect high surf warning signs. Every year unwary tourists get washed out to sea. Although categorized as moderately easy, this hike would not be suitable for small children or the elderly.