Our world is high-tech. An understatement to be sure, but the nature of constantly being turned on and tuned in has been going on long enough that it’s hard to imagine what life was like before computers and cell phones and 24-hour news coverage, much less before the convenience of things like cars and indoor plumbing. Those of us who are old enough remember a time before computers and cell phones were commonplace, but children born into our technologically-advanced world have never known anything else. Stories about a time that didn’t involve email or social network sites or smart phones must evoke pity and a sense of quaintness.

Modern vacations often revolve around theme parks and other such high-tech entertainment. With the detail-oriented reconstruction and excavation of Jamestown, Virginia, family vacations can be a time to disconnect, however briefly, from the modern world and experience life as it was like at the dawn of the United States’ founding. And let’s be honest: who couldn’t use a break from the constant assault to our sense with a trip down history’s lane to a more simplistic way of life?

Simplistic doesn’t mean simple. Jamestown was rife with conflict and the horrors of war in addition to the hardships of just trying to stay alive in a world where there was little protection from Mother Nature and all she could throw at you; there is no way to truly bend her to your will. The past has a lot to teach us so long as we pay attention. Visiting the living-history museum at Jamestown provides the opportunity to immerse yourself and your family in a vacation that is both entertaining and educational; a chance to connect with the history of the United States.

The rustic Colonial Parkway snakes through the Colonial National Historical Park, blanketed on either side by abundant greenery and thriving wildlife. An open car window serves as a living television screen to the world sauntering by, soothes the senses with a chorus of chirping birds and rustling trees. A quick glance reveals a bounding deer here, an eagle swooping there. They are all reminders that a world rich with wonder exists beyond the realm of technology.

Jamestown is where it all began. 1607 wasn’t the first time attempts to colonize the area had been made – the inexplicable and myth-inducing demise of the Lost Colony of Roanoke is just one example. But the establishment of Jamestown is where efforts finally stuck and the complicated relationship between the settlers, the indigenous Powhatans, and eventually the Angolans, began.

Nestled among towering trees is the Jamestown Visitors Center, an understated building that blends in nicely with its woodland surroundings. Inside, the adventure of digging into Jamestown’s history begins with a documentary, 1607: A Nation Takes Root, in the museum theater. The information is basic, a brief introduction to Jamestown and the peoples who populated the area, but it is enough to wet a child-like curiosity and leave a thirst for learning more.

When the film is over, a saunter through the museum is just the ticket to partially quench the desire for more information. The 30,000 square feet of gallery space initially seems overwhelming and is definitely a reminder to wear sturdy shoes, but the overall experience is painless, so enthralling are the stories told in part by hundreds of 17th-century African and European relics and Virginian archaeological artifacts that range from portraits and documents to tools and toys.

The quiet walk from the Jamestown Visitors Center to the Powhatan Indian Village is punctuated by the sounds of the woods coupled with the distant joyful squeals of children and the murmurs of adult voices. Discovering the typical 17th-century lives of the Powhatan tribe is a mix between reverence and solemn contemplation. Knowing the re-created village is drawn from archaeological evidence of the Paspahegh Indians and settler descriptions is comforting; history hundreds of years old has not been lost to the effects of time. Sapling-structured, reed-thatched huts dot the landscape waiting to be explored. Children dart from hut to hut, poking heads in and out of entrances, touching, exploring, learning. Historical Interpreters, as they’re called, stand dressed in traditional costumes and patiently share facts around the fire circle, bringing the Paspahegh Indians to vivid life. Learning about the farming techniques they used and how to grind corn gives a new appreciation for the conveniences of modern life.

Down the path from the Powhatan Indian Village is the Jamestown Settlement’s pier along the James River. Water laps lazily against the hulls of the Susan Constant, Godspeed, and Discovery, the re-created ships rocking gently. Children clamber from bow to stern, learning about the more than 4 months journey that carried settlers from England to the shores of Virginia with rudimentary navigational instruments and tenacious dreams of a better life. Riverfront Discovery Areas along a winding pathway allow visitors big and small to learn about the role the James River played in travel, commerce, and cultural relations between the Powhatan Indians, the English, and the Africans. From helping a Historical Interpreter create a Powhatan canoe from a tree trunk to using traditional carpentry tools, there is plenty for hands to experience.

James Fort is a re-creation of the Jamestown Settlement as it existed from 1610 to 1614. Primarily used as a military and commercial settlement, it boasts everything from angular wattle-and-daub buildings with thatched roofs to a working Anglican church. Sparks fly in the blacksmith’s forge as Historical Interpreters work with metal objects. Near one of the fort’s three bulwarks, others demonstrate how matchlock muskets are shot. Depending on the time of year, the opportunity exists to see how food and tobacco crops were cultivated, what and how 17th-century tools were used to create items from wood, and what domestic activities were needed to ensure daily life ran smoothly. Other activities include donning armor and learning traditional games including quoits and ninepins, the 17th-century versions of ring toss and bowling, respectively.

Historic Jamestown sits adjacent to the re-created Jamestown Settlement and is where the original colony was located. Since it is an active archaeological dig, visitors can watch as archaeologists continue to unearth the secrets of the past, including the 1607 Jamestown Fort, a site that was only recently discovered. More than 1,000 artifacts have been painstakingly excavated from the site and can be seen at the Nathalie P. and Alan M. Voorhees Archaearium. The conservation staff is on hand to answer questions about how the artifacts are preserved and protected, and what steps they take to research their discoveries. A unique activity for children involves searching for animal bones, shells, and other items from excavated earth; items that will provide more clues about what it was like to live at the fort during its heyday. The property is open for exploration and viewing what remains of the original settlement, including the only surviving above-ground structure, a 17th-century brick church tower.

The winding drive back to civilization along the Colonial Parkway remains much as it was on the drive in. The scenery is still as picturesque, the woods still alive with wildlife; a chance to reflect on and recount the day’s adventures and to prepare for the return to the modern world. The living television screen outside scrolls past, a realization that life goes on around us regardless of whether we’re in the 17th century or the 21st. The ghosts of centuries past whisper that while technology has changed the world, the world hasn’t necessarily changed with the technology. There are still conflicts and the horrors of war and the daily struggles to survive. As much as things have changed, so much has stayed the same. This is what history has to teach us: human nature now is much the same as human nature was then, and while this somber note might seem disconnected from the day’s adventures, it is only by looking at and understanding the past that great things can happen. 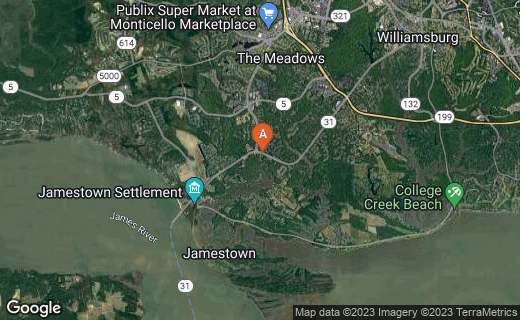