History of American Towns--In the St. Croix River Valley between Minnesota and Wisconsin including Stillwater, Minnesota

The lower St. Croix River forms the state border between Wisconsin and Minnesota. In 1688 Jean-Batiste-Louise Franquelin recorded a “Fort St. Croix” on a 1688 map. In 1688 or 1689 the name “Riviere de Sainte-Croix”  eventually led to  the current name.

Semi-nomadic Ojibwa, Dakota, and nine other tribes originally occupied the area. By the eighteenth century the Ojibwa and Dakota were the primary tribes in the area until about 1745, when the Dakota were forever driven out of the valley as a result of the Battle of Kathio, according to Wikipedia.

The treaty of 1873 of St. Peters  made with the Ojibwa  ceded to the United States government the land that is now north central Wisconsin and east central Minnesota. That opened the region to logging. In the 1840’s important sawmills were started at St. Croix Falls and Marine on the St. Croix. Later Stillwater became a primary destination for lumber.

During the logging era logs were rafted down the St. Croix River. Because of the narrow gorge and a sharp turn at Angle Rock bad logjams occurred in 1865. Probably the worst in history was in June of that year when at least 150 board feet of logs backed up for three miles. They tried dynamite and tugging with steamboats to move the jam unsuccessfully. A  crew of 175 men working around the clock took six weeks to break up the jam. The logjams had the odd affect of attracting tourists to the Dalles of the St. Croix.

There are two state parks on the Minnesota-Wisconsin border, both of which are called Interstate State Park. The towns of Taylor Falls, Minnesota and St. Croix, Falls, Wisconsin are next to the parks on either side. The Interstate Park is within the St. Croix National Scenic Riverway and the Ice Age National Scenic Trail is on the Wisconsin side. On the Minnesota side one can see National Park service Rustic style buildings. The parks straddle the Dalles of the St. Croix River. A steamboat service was established at Taylor’s Falls. In 1906 the commissioner of the Minnesota Park arranged for boat tours of the Dalles. These tours are still being made and Taylor Falls was a favorite place to take a short trip and have a picnic when I grew up in Minnesota.

We sometimes went to this town to do laundry because it was a  very pleasant town. In the 1800's it was a frequent stop for excursion traffic. During may throught October tourists can ride the Osceola and St. Croix valley Railway Excursion.

Marine has a population of about 600.It was founded in 1839 as Marine Mills. And it was the site of the first commercial sawmill on the St. Croix River. David Hume, an Illinois lumberman and Lewis Judd built it. It was named after their hometown Marine, Illinois.

I lived in the rural area of Marine for a winter in the late 1960’s. At that time it still had a general store and maintained much of the original town. There were also a lot of hippies and draft dodgers roaming around the area. On the other hand it was attracting  Yuppie residents.

From a book I read back then I understand that the original Betty Crocker test kitchen was there at one time.

The lower St. Croix River forms the state border between Wisconsin and Minnesota. In 1688 Jean-Batiste-Louise Franquelin recorded a “Fort St. Croix” on a 1688 map. In 1688 or 1689 the name “Riviere de Sainte-Croix”  eventually led to  the current name.

Semi-nomadic Ojibwa, Dakota, and nine other tribes originally occupied the area. By the eighteenth century the Ojibwa and Dakota were the primary tribes in the area until about 1745, when the Dakota were forever driven out of the valley as a result of the Battle of Kathio, according to Wikipedia.

The tale I ran across about 30 years ago but cannot find now was that there was a mudslide off the river bluffs into the St. Croix which formed a base on which the city of Stillwater is build. It has a population of about 15,000.It is also part of the Twin Cities Metro Area.

One of the oldest cities in Minnesota it was  incorporated in 1854. In 1853 it was chosen as the location of the Minnesota Territorial Prison, which was opened in 1853.

It is a popular destination for day trips from the twin cities with bookstores, antique shops, restaurants, bed and breakfasts historical sites and the scenic river valley.

The Stillwater Bridge is a vertical lift bridge crossing the St. Croix River. The bridge feeds into downtown Stillwater so traffic often gets backed up. The bridge is on the national historic register but is structurally deficient. A dilemma!

Bayport is about a mile from Stillwater. In 1873 the St. Croix Railway Improvement Company combined three communities into South Stillwater, which was changed to Bayport because of confusion with the City of Stillwater.

The Minnesota Correctional Facility—generally referred to as Stillwater Prison- moved from Stillwater to Bayport in 1914. The Anderson Corporation-home of Anderson windows-is located there. Bayport also has the Bayport Marina.

Hudson Wisconsin is a growing community. It has been a popular place to live for people from the Twin Cities, Irs population is about 11,800 with many histoic buildings..

In recent years a large shopping area has grown up outside of town whith what seems like all the box stores.

It was originally called Willow River and then Buena Vista by Judge Joel Foster, founder of River Falls, Wisconsin. Alfred day petitioned for the name Hudson because of the similarity between the bluffs along the river and the Hudson River in New York.

As in the rest of these towns the lumber industry was a prime attraction in the 1850s and 1860s. With its Historic downtown it is currently a tourist destination.

Prescott is an attractive town that I often go through to visit family in Minneapolis. It has a population of 3.764. At one time it had the motherhouse of the Franciscan servants of Jesus.

The Mississippi River and the St. Croix River come together here which makes it a popular place for private boating. It is also part of the metropolitan statically area of the twin cities. 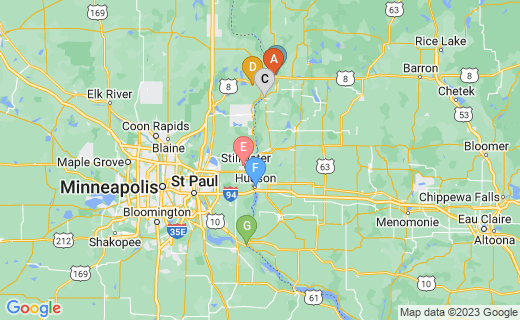