This is the third hub on islands around Peninsular Malaysia.

Now, this time we will be visiting – Pulau Pinang. “Pulau” means island in the Malay language.

Previously known as the Pearl of the Orient, Pulau Pinang is a charming and beautiful holiday destination. Pulau Pinang got her name from the abundance of betel nut palms scattered along her soft, sandy beaches. “Pinang” means betel nut in the Malay language. The translation of "Pulau Pinang" means Island of the Betel Nut. However, in English this island is called Penang.

The history of Penang started with Captain Francis Light. This charismatic English Captain persuaded the Sultan of Kedah to grant Penang Island to the British East India Company. According to local folklore, when Francis light arrived on Penang Island in 1786 he fired gold coins into the surrounding forest to induce his men to clear the area. 14 years later, the Sultan of Kedah further granted a strip of land on the mainland across the channel to Francis Light.

For over a century, Penang remained under British colonial rule until 1957, when Malaysia gained independence. Today, the state of Penang comprises of the Penang Island and the strip on the mainland which was named Province Wellesley. This hub will focus on Penang Island. Penang Island is located in the north western coast of Peninsular Malaysia.

Penang formed part of the Straits Settlement with Malacca and Singapore in 1826. The Penang port was among the busiest in the region, attracting rich traders dealing in the lucrative trade of tea, spices, porcelain and cloth. Settlers and fortune seekers from the all over came to Penang and it was from this unique mix of Chinese, Malay, Indian and Siamese (among others) cultures that Penang became a melting pot for hybrid communities. The most famous being the Baba Nyonya, Jawi Peranakan and Eurasians.

George Town is the capital of Penang and was named after King George III. George Town was accorded city status by Queen Elizabeth II on January 1, 1957, thereby becoming the first town in the Federation of Malay (after Singapore) to become a city. In present time, this cosmopolitan city is possibly the second busiest in Malaysia after Kuala Lumpur. On the other hand, as recognition of her rich heritage, George Town was listed as the United Nations Educational, Scientific and Cultural Organization (UNESCO) World Heritage Site on July 7, 2008. It is officially recognized as “A unique architectural and cultural townscape without parallel anywhere in East and Southeast Asia.” - by UNESCO

Visiting George Town Heritage site is like visiting a world where time stands still – a world where history, nature, religion and traditions are weaved into a rich cultural tapestry. Be impressed by the unique charms of Straits eclectic architecture and colonial buildings. Here, every building represents a page of our history and every street has a tale to tell. Being in George Town is like walking through the paths of history.

This historic town is best enjoyed on foot or trishaw, enabling you to relish the sights and sounds better. Make sure you have a camera with you.

Penang Hill rises 830 metres above sea level, providing a welcome respite from the heat down below. Penang Hill is one of the most popular attractions in Penang. At the top, you can view the breathtaking panoramic bird’s eye view of the whole island while enjoying the cool, refreshing air. On a clear day, you can even see as far as Province Wellesley. The Penang Hill funicular train ride in Air Itam takes you all the way up to the top of the hill in just 30 minutes.

Penang hill (originally known as Strawberry Hill) was first cleared by Captain Francis Light to plant strawberries, hence its original name. Visitors will get to visit some of the grandest colonial mansions which are now restaurants and guests houses. On the top you will also find a Hindu temple, a church and a mosque.

Although it is possible to trek up the hill or arrange for a jeep to take you up (via the Botanic Gardens), the short train ride is not to be missed (especially since it has been faithfully ferrying visitors since 1923)!

The only spice garden in Southeast Asia, this dedicated spice sanctuary is a paradise on earth. Featuring over 500 exotic species of flora and fauna, the exquisite Tropical Spice Garden is a living museum of botanical wonders spread over 8 acres of lush nature conservation land. With 11 garden trails and stream crossings, waterfalls and structures made of recycled organic materials, this award winning attraction also features a Spice Museum, a Spice Café (where you can get a spectacular view of Teluk Bahang’s pristine blue sea while sipping herbal tea) and a Gift Centre (where you can buy organic gift items and souvenirs which include fresh spices, citronella mosquito repellent, sandalwood soaps, massage oils and perfume oils). This Gift Centre is a one of a kind boutique that sells very interesting items made from the most popular local spices.

Construction of this temple began in 1890 and today, is the largest Buddhist temple in Malaysia. Arguably the largest Buddhist temple in Southeast Asia, Kek Lok Si Temple perches on top of a hill in the town of Air Itam. Known as the Temple of Supreme Bliss, Kek Lok Si is one of the most famous temples in the region. Founded more than a hundred years ago, this temple is filled with beautifully landscaped gardens and sacred mini temples. A striking seven tiered pagoda called The Pagoda of 1000 Buddhas combines Thai, Chinese and Burmese styles in one structure and houses a stunning collection of Buddha statues made from all sorts of precious materials. The statues of The Four Heavenly Kings, guarding the four points of the compass (North, South, West and East) with the statue of The Laughing Buddha in the middle can also be seen in this temple. However, this temple’s main attraction is the massive bronze Kuan Yin statue situated high up on the hill, measuring 120 feet in height. The best time to visit Kek Lok Si is during Chinese New Year because thousands of decorative lights are turned on to commemorate the New Year celebration, transforming the place of worship into a brightly lit fairyland at night.

In the Portuguese word “Ferringhi” mean foreigners. “Batu” means rock in the Malay language. Put together Batu Ferringhi means Foreigners’ Rock. With its sandy shores and vast open blue sea, Batu Ferringhi offers an amazing respite from the hustle and bustle of town. This stretch of beach offers a wide range (splurge to budget type) of accommodation and dining options. You can spend an afternoon listening to the soothing sound of waves and sunbathe under the sunny rays of this tropical beach. For the active, water sports like parasailing and jet skiing is popular here. At night, this popular tourist destination comes to life as traders display their wares while eateries serve their best cuisines to attract business. This night market is worth visiting.

From modern shopping malls to night markets, flea markets and antique shops to cultural establishments, Penang has an extensive range of goods for sale. During the annual nationwide shopping mega sale in August and December, Penang becomes a bustling hub of shopping excitement as locals and tourists come to experience the shopping extravaganza.

Bargaining is the culture here. Except in shopping malls, do your best to bargain for the best price. And if the price is not to your liking, you can always look around elsewhere.

From the Lorong Kulit and Rope Walk flea markets to the Campbell Street and Little India traditional shopping areas and modern shopping malls like GurneyPlaza and Queensbay Mall, Penang is a shopper’s paradise.

Check out the nightlife in Penang. The Upper Penang Road party hub in George Town springs to live after sunset. Here, you will find smoky old school English pubs, karaoke lounges, clubs with live bands, state of the art nightclubs and trendy bars all enjoying brisk business. At the nearby Chulia Street, backpackers chill and relax in budget motels and coffee shops that serve relatively cheap beer and drinks.

I have saved the best for last. Take note that I did not say dine… I say Eat. Taste the street food. Many Malaysians perceive Penang as the best food destination in the country, not because of some fancy, high end restaurants but rather for their humble roadside eateries and stalls that line the streets. Penang street food includes Chinese, Malay, Indian, Nyonya and Peranakan cooking all served in just a few minutes. Eating by the roadside is an enjoyable experience as you watch the people of all races indulge in their favourite past time – food. A walk along Gurney Drive stimulates all your taste buds as it boasts of some of Penang’s best street food. However, delicious Penang street food is not limited to Gurney Drive only.

Penang is densely populated. Therefore traffic is congested, even more so during the rush hour.

Taxis are easily available around the island. This is the most common means of getting around by visitors.

Buses are the cheapest way to travel around PenangIsland. The main terminals are located in George Town’s Weld Quay and KOMTAR building.

The three wheeled trishaw is popular among visitors. Trishaw is well-suited for traveling around the city, allowing you to make several stops along the way and shop for souvenirs. Do agree on a price first before you board one, and remember to bargain if you feel it is expensive. You can tip later if the service is good.

Renting a car is a flexible and convenient option. However this is not recommended if you do not know the roads well and traffic is a challenge in Penang especially during rush hour.

A Sample of Penang Hawker Food

Har Mee literally means “prawn mee”. It is a dish of egg noodles mixed with rice noodles in a prawn based soup, which is made from fresh shrimp, dried prawns and pork or chicken, served with water spinach , bean sprouts, sliced pork, sliced prawns and slices of boiled egg. Har Mee is also called Hokkien Mee in Penang.

Even though the Malays and Baba Nyonya communities may have a somewhat different style of preparing the Asam Laksa (thick rice noodles in hot and sour fish gravy topped with local a mix of fragrant herbs and pineapple), the end result is always a flavourful, spicy and mouth watering bowl of rice noodles that will leave you craving for more. I can eat 2 bowls of assam laksa at a go.

Steamed rice served with a wide variety of curries and dishes skillfully prepared with fish, chicken, squid, prawns, mutton and beef. This, I have to say is my favourite. Nasi kandar is simply delicious for those who love aromatic spices.

And Rate it below. Thank you. 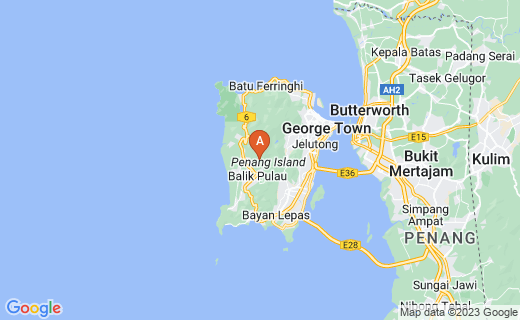