The Building of Hoover Dam in Black Canyon

Hoover Dam continues to be an amazing site, even though it was begun in 1931. Before Hoover Dam was constructed, the wild Colorado River often caused flooding, which would be followed by years of drought. The five reasons for constructing Hoover Dam were: Flood control, irrigation, navigation, water storage and hydro-electric power. Since the Colorado River provided and continues to provide water to seven states (Arizona, California, Colorado, Nevada, New Mexico, Utah and Wyoming) finding a way to manage the water flow was extremely important. In 1922, a water allotment agreement called The Colorado River Compact was reached between the states which paved the way for a dam to be built. A site above Black Canyon, about 30 miles from the city of Las Vegas Nevada was selected.

America was in the depths of the Great Depression and people flocked into the area for a chance at a job. Many lived under tarps and under their cars waiting for an opportunity. A construction company formed of six smaller construction companies, named appropriately The Six Companies, Inc. began work in 1931. The work was both hard and dangerous, and the wages were according to the level of risk and the amount of skill. The wages ranged from fifty cents to eighty two cents per hour, and work only stopped on the 4th of July and Christmas. The workers and their families were housed in nearby Boulder City. The town had a movie theatre and other forms of family entertainment, but no gambling was permitted and the town still has a ban on gambling today!

Although it was estimated that constructing the dam would take seven years, the dam was completed in five years. The cost of construction was $49 million. Hoover Dam stands 726 ft. high, required 4 million cubic yards of concrete and is 1,244 feet long. It has been estimated that if the concrete used for the dam had been used to construct a two lane highway, the road would stretch 3,300 miles long. The storage capacity of the dam is 9.2 trillion gallons of water. It is estimated that the dam weighs approximately 6,600,000 tons. The sale of the hydro-electric power that Hoover Dam generates at the power plant pays for the operation of the dam.

During the construction period, the project was called The Boulder Project, so initially the dam was called Boulder Dam and was officially named Boulder Dam at its dedication, but later in 1947, Congress voted to change the name to Hoover Dam. The name seemed fitting because it was during the presidency of Herbert Hoover that the idea for the dam and the Colorado River Compact was formulated and had paved the way for the construction to begin.

By damming the Colorado, Lake Mead was created. Lake Mead is managed by the National Park Service, and the lake is a good place for boating, water skiing, swimming and fishing.

In October 2010, the new Mike O'Callaghan-Pat Tillman Bridge was constructed to by-pass Hoover Dam. (Hoover Dam is somewhat visible from the new bridge)

The Art of Oskar J.W. Hanson

While most visitors gaze at the Colorado River and Hoover Dam itself, the artwork of Hanson is also a creation of practical genius. The design of the two famous "Winged Figures of the Republic" was based on Hanson's belief that the building of Hoover Dam was a link of mankind's genius to construct, and Hanson likened the construction of the dam to the building of the great pyramids in Egypt. The figures are cast bronze and stand 30 ft. high and are placed on top of polished black diorite rock bases. Between the figures is the flag, so that the figures were intended to appear to be guarding the flag.

The sculptures and flag pole bases sit on a terrazzo floor that is inlaid with a celestial map. The bodies of the solar system are positioned within the map/chart. For those who can read a celestial chart, as long as the floor lasts they will know the date (September 30th, 1935) that President Franklin D. Roosevelt dedicated Hoover Dam. Other artwork at Hoover Dam includes a monument to the 96 men who died during the construction process (It is only a myth that there are workers buried inside the dam.) and the bass reliefs that flank the elevators on both the Nevada and Arizona sides feature scenes honoring the purposes of the dam and honors Native American tribes.

Touring Inside of Hoover Dam

Tours of Hoover Dam began in 1937, which was two years after its completion, and the tours continue to be an attraction for over a million visitors a year. There are two tours daily. The first is the Power Plant Tour, which is a 30 minute guided tour which includes admission to the visitors center. The second tour is the Hoover Dam Tour which is an hour long tour and includes the power plant, a tour inside the tunnels in the dam, and admission to the Visitor Center. *Please note that children under eight, are not permitted on the Hoover Dam Tour and that this tour is not wheelchair accessible. The Visitor Center has a 10 minute film on Hoover Dam, maps, photos of the construction and displays. Tickets for the tours can be purchased on site or on line. Hoover Dam is a National Historic Landmark. 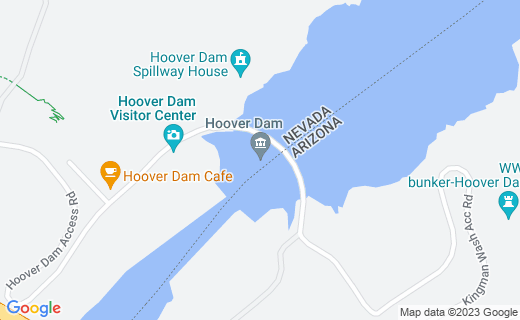