Vice Admiral Horatio Nelson has gone down in history as one of England's greatest naval heroes. His long standing career with the Navy has gained him admiration the world over. But this article will cover his Norfolk roots and his love for the County rather than his Naval career.

Born in the small village of Burnham Thorpe in North Norfolk, Nelson was the 6th of 11 children. His parents were Edmund Nelson and Catherine Suckling. The house he was born in no longer exists, but the Church has a small memorial display dedicated to him. Edmund Nelson was, in fact, Rector of All Saints Church at the time of his birth.

Horatio went to school in North Walsham until he was 12 years of age. From there he went to King Edward VI Grammar School in Norwich, Norfolk. There is a statue of Nelson that stands in the grounds of Norwich Cathedral. When Nelson married Frances Nisbett in 1787 they lived in his Fathers' Parsonage for 5 years in Burnham Thorpe. During this time he was out of work and on half pay from the Navy. So he spent a lot of his time looking for work and dealing with family matters. But it was in 1793 that he was given command of HMS Agamemnon.

Nelson visited Great Yarmouth in 1800 after The Battle of the Nile. This is when he famously said "I am myself a Norfolk man and glory in being so." It seems he had a sense of humour as on 6th November 1800 when standing outside The Wrestlers Inn in Church Plain, Great Yarmouth, Mrs Suckling commented that they should rename the pub The Nelson Arms. But Nelson replied with "That would be obsurd, seeing that I have but one!" This was when Nelson was given the Freedom of the Borough. The Wrestlers Inn was a public drinking house in Great Yarmouth. Although the pub itself is no longer there, there is a plaque on the wall describing Nelsons visit to the pub.

Nowadays, Nelsons Monument, also known as the Norfolk Pillar, is situated in the midst of an industrial estate, but when it was first erected, the landscape was very different. The monument was designed by architect William Wilkins and was erected between 1817 and 1819. It stands at 144 feet high, and there are 217 steps to the top. James Sharman was the first custodian of the Monument. James Sharman was a local man from Great Yarmouth who was press ganged in 1803. He subsequently ended up on The Victory during The Battle of Trafalgar in 1805. Although wounded in the battle, he did eventually return to Great Yarmouth.

This is Grade 1 listed and in the summer time there are guided tours where a guide will take 2 people at a time up to the top of the monument. This is arranged by the Nelson Museum, located in Great Yarmouth. At the top of the pillar is a figure of Britannia, that is facing towards Nelsons birthplace of Burnham Thorpe. 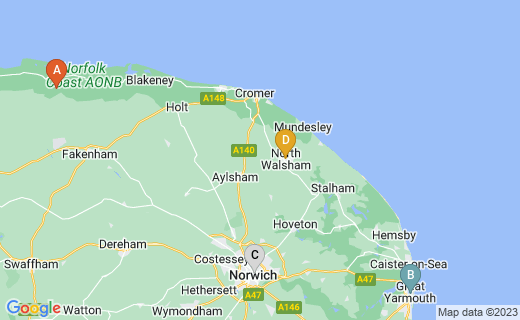 England Expects that every man will do his duty.

As I mentioned earlier, there is a museum in Great Yarmouth dedicated to Lord Nelson. Situated on South Quay, this museum is dedicated to Nelson's personal life and Naval career with documents and artefacts on show. There are also hands on exhibitions and interactive games for people to try, along with a small courtyard with maritime related games for the kids to play.

This museum is the only one in the country dedicated to Horatio Nelson and is open during the summer for people to visit. This is also where you book tickets if you want to go up the monument. By visiting this museum you can learn all about Horatio Nelson, his life and career and his Norfolk roots.