It's like another world up on Tenerife's Mt Teide

Up on the higher parts of Mt Teide is like being on the moon or on the planet Mars. Miles of red barren rocks and vast expanses of dry sandy volcanic ground with the peak of the highest mountain in Spain towering above it all make it feel just like another world, especially if you get away from the road and tourist centre for this amazing location in the highlands of Tenerife in the Canary Islands. 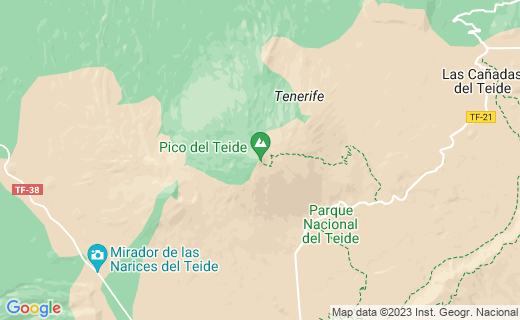 I had gone there after reading about the mass blooming of the strange Tajinaste Rojo, a red Viper's Bugloss that grows in the extreme conditions of heat by day and cold at night producing flowering spikes that can reach over 6ft in height and which have become a well-known symbol of Tenerife. Unfortunately, by the time I got a chance to visit the mountain the flowers had all finished and were going to seed but they still look equally impressive when they turn green, as they had mostly done.

The Tajinaste Rojo likes to grow in colonies and they come in a variety of sizes and shapes and add to the weirdness of the landscape there. Very occasionally you find a double-spiked one or ones that have somehow become crooked.

Now I had read how all of the Tajinaste Rojo plants were miraculously flowering at the same time and I was wondering how this could be because it would mean there would be none ready to bloom next year as the plant normally grows in its first year and blooms in the second. I discovered that whilst it was true that the vast majority had blossomed, there were others that Mother Nature had somehow told to stay as they were as rosettes of grey-green leaves.

These dormant plants got me thinking about how there is often a safeguard built in to the life cycles of plants and animals so that not all individuals reach the same stage at the same time. For example some species of moth, which normally emerge as adults after one year, in a minority of cases wait until a second has come around.

I didn't see any moths on Teide but there were hundreds of butterflies enjoying the hot sunshine and the masses of wild flowers that perfumed the mountain air. There were a few white butterflies, a Clouded Yellow and loads of the fast-moving Canary Blue butterflies that would only stop for a few seconds and were gone too quickly for my camera skills.

I had left the road and taken a mountain trail that logically ought to have a means of getting back on it somewhere in the direction of the cable-car terminus. Distance was deceptive, as I have often found here, but I had several hours before the last bus would arrive to take us back to Puerto, and I was enjoying my walk.

Planet of the Apes

Mind you, I couldn't help imagining Urko and a band of gorilla soldiers riding towards me from around the next rocks. Mt Teide makes the perfect setting for making a Sci-fi movie and there is a rumour going around that the location was once used for the filming of Planet of the Apes. Wonderful as the area might be for this type of film, it is only a rumour, but one that is easy to believe in!

Bushes of white-flowered Canary Broom and other wild flowers were growing in profusion and I noticed that were many honeybees busy gathering nectar from this excellent larder. I wondered where they were all coming from and then I found out.

Taking a side pathway, which I reckoned should take me back to the road I suddenly was confronted by a sign saying that only people working with bees were allowed to go past it. Apparently there were beehives there and so I took note and went to find another route.

Eventually I struck the road to the tourist centre and got back in time for a bite to eat and a refreshing beer. I sat outside watching lizards that do as well at this high altitude as they do on the coast and the ones around the restaurant area are always on the lookout for scraps.

I took my baseball cap off to let my head get some fresh air and it was then that a Canary Blue butterfly landed on it and started feeding on the sweat in the fabric. I was delighted to find that the butterfly was enjoying this feed as much as I was enjoying mine and it was content to stay where it was for me to get a snap.

But something even better was about to happen because when I went to where the buses pull in, another butterfly landed on my hand. Like the one on my hat, it was sucking up the sweat and because of the salt preferred this to the usual diet of nectar.

Then a second blue butterfly joined the first on my hand, and, as other people watched with amusement, I lifted my hand up, and with camera in the other I got the perfect picture on the day I became a meal for the butterflies.