Australia is a country crisscrossed with roads of all kinds, linking the top end of Queensland to the southern most tip of Tasmania, granted via The Spirit of Tasmania a Ferry that you drive onto. One can go from Western Australia to N.S.W, to the Northern Territory and on to Victoria, without leaving the road and bypassing many awe inspiring sites along the way.

In all cities, towns, anywhere with reasonable population, the roads are made of bitumen or road base. Most remaining roads are gravel or dirt, which are regularly maintained by grading or smoothing out with a tractor.

Australian's can also be an assertive lot when driving. Many think they are of the skill level of speedway drivers and on the other hand, there are those who err on the side of safety to the point they make themselves the unsafe ones, going so slowly they block and confuse the flow of traffic. Aussies have an inbuilt sense of fairness, this translates to reasonable respectfulness when driving and turn taking.

Although as quickly as someone will let you in to merge in front of them, someone else may lean out their window yelling their thoughts on your driving techniques or lack of it in their view! This may be accompanied with a hand or finger gesture - just ignore the idiot and keep going... safely of course. Ahhh, those Aussie's can be a verbal race.

There are clear laws for driving in Australia with penalties that will be applied if you were to break or breach those laws, including incarceration.

Generally, if you rely on common sense and a few of the tip and hints below - you should be fine!

Which Side of the Road?

Always drive on the LEFT HAND side of the road. Whether there are single lanes, multiple lanes or no lanes at all - Keep Left. It is a road rule that when on a multi lane road, keep left so the right lane is clear for faster vehicles to go around you. Once they have overtaken they too should merge into the left lane.

Keep to the left side of your lane as much as possible so vehicles travelling in the opposite direction can also pass safely. If there are marked lanes do not cross the marked lines unless overtaking or turning. If there are un-broken, double yellow lines you cannot cross them to the other side, for whatever reason.

When parking your vehicle on the street it must be parked on the left hand side, in the direction that traffic flows.

Keep left and give way to the right. Should keep you in the correct areas to avoid collisions.

All occupants of a vehicle must wear a seat belt and have access to a seat to themselves. Children must also be restrained in an Australian approved car seat until they are 7 years of age and not allowed to travel in the front seat until they are 12 years old. The driver is liable for enforcing these restrictions up to the age of 16 and therefore will incur any related fines, once the person is 16 it is their responsibility and will incur any fines personally.

All roads have a maximum speed limit that you cannot exceed. It is suggested to go at a slower speed in wet weather, darkness, when you're tired or there is a lot of other traffic.

When there is no speed limit sign, the default speed limit is 50 km/h in built up areas (cities or towns) or 100 km/h in country areas.

The legal alcohol limit for a fully licensed driver is 0.5. There are regular roadside tests conducted by the police where both alcohol and drugs can be detected. Police can also request you take a breath test for alcohol when performing any type of road check/stop. Penalties will be enforced immediately if found to be intoxicated while driving. Don't do it!

Giving way means that you, as a driver, must slow down and be prepared to stop if your vehicle will cross another vehicles path, possibly causing an accident.

It is always a good guide to give way to the right at all times.

When changing lanes, you must first indicate your intention of moving into the adjoining lane, by indicating in the direction you are going to move. You must always give way to traffic already in the lane.

If you are in a lane that ends, you are required to merge into the closest lane, travelling in the same direction. Here you give way to any vehicle that is in front of you, then it is your turn to join the traffic flow. Again, you must indicate your intention to join the flow of traffic.

How To Use A Round-A-Bout

Round-a-bouts are intersections with a traffic island or circle in the middle of it. Traffic goes around the island, in a clockwise direction.

You must indicate if you plan to turn left or right when entering the round-a-bout. If you are travelling straight through, no indicator is required.

If you are travelling on a multi-lane round-a-bout, and intend to turn left, enter or exit via the left lane. Or the lane with a left arrow on it.

Round-a-bouts can also be used to turn right, when doing so, enter via the right hand lane if it's a multi-lane road. It's optional to indicate when turning off the round-a-bout, but is courteous and safer.

A person can change lanes on a round-a-bout as long as it's safe to do so and they indicate their intention to change lanes.

The reality of round-a-bouts is that most Australian's don't know how to use them correctly. Your best defense is to always give way to cars already on the round-a-bout and also to your right. Don't rely on them indicating that they are leaving the round-a-bout, this is a new law and many drivers don't know about it.

Many Australians have lost the location of their indicator, or for some reason it doesn't work correctly. Anticipate they are going to go past you - but act smartly when a safe opening appears, more than one vehicle can be on the round-a-bout at one time and they eliminate the need for traffic lights.

Are you planning on driving while on holidays in Australia?

Wildlife - Watch Out from Dawn to Dusk

Australian roads pass through acres of paddocks, bush lands and nature reserves. Our countryside is overflowing with animals in their natural habitat, and unfortunately they haven't yet understood the roads are ours and to stay off!!!

While driving you will see signs on many roads (not all) with an outline of an animal - usually a kangaroo or a wombat. This is where it is common for wildlife to cross over the road or graze alongside the road, although this occurs EVERYWHERE but the city itself, so keep your eye out.

Kangaroo's and wallabies are crazy creatures, they love to graze on the juicy grass along the sides of the roads but when they hear or see a car, they react in all the wrong ways. Particularly at night a kangaroo or a wallaby, when disturbed grazing along the road will hop randomly at your lights. Firstly, they will just stare at your vehicle lights, making you think it knows to just stay there to stay safe, but as your headlights come closer to them, at the last moment they will bound TOWARDS your car. Some of these animals are huge and can cause enormous amounts of damage to your vehicle if you hit one. That is of course, if you didn't attempt to swerve to miss the creature and therefore have landed in a ditch or crashed into someone else.

Your best defense with kangaroo's and wallabies is to drive slower at dawn and dusk, the most active time for feeding. If in a rural area you can honk your horn to warn and hopefully disperse the animals before you get there. There is also a small device you can attach to your vehicle that as you drive, the wind passing through the device causes it to emit a high pitched sound that only they can hear causing them to flee.

Australian road rules have been created with safety as the number one priority. Our road rules are basic and logical, if you adhere to the speed limit, are courteous and follow the rules, everyone should arrive to their destination, safely.

A happy wave of a Thankyou or indeed a sorry, can get a person a long way! Be careful, take your time but most of all, enjoy your trip to Australia. 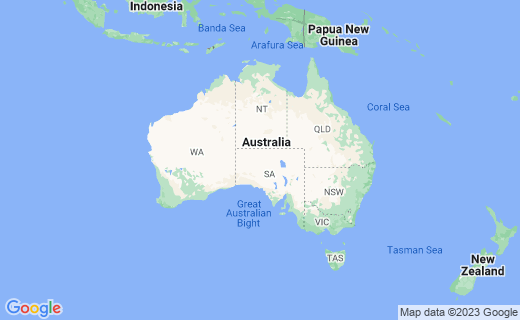