How to Pack a Blazer for Travel

Folding A Blazer The Right Way

When I travel, I usually don't need a blazer - but my teenage son does. Since I typically would let him pack his own clothes, I wasn't monitoring his folding techniques. On a few of our prior of trips, I was less than thrilled with how his blazer looked when he removed it from his suitcase. Another time, when we traveled by car, I thought I would avoid this wrinkly problem by hanging the blazer in the car. When I arrived at our destination, unbeknownst to me while we were en route, the blazer had fallen off the hanger and was crumpled up in the back seat. Talk about frustrating!

In my sufferings, I realized if I wanted this teenage boy to look decent in his blazer at our destination point, I was going to have to take charge of the blazer myself. I can now say that I successfully pack the blazer last in his suitcase, after he has packed the rest of it. At least, I can have the peace of mind of knowing that that one item will be removed unscathed from the packing experience, even if most of the rest of the wardrobe he chose is, well, in a less than wrinkle-free condition.

If you find that you must fold a blazer, there is are three main ways to do so.

One is the vertical fold:

Most of the time, your folded blazer will just fit inside a carry on.

A blazer can be folded the same way one would if they were folding a dress shirt. 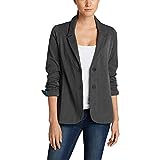 Folding a Blazer Inside Out

Folding a Blazer Inside Out (Video Demonstration)

Though there will be very little wrinkles, it will be extremely difficult to eliminate any possibility of a wrinkle. In the vertical fold, the wrinkle appears in the horizontal part of the process. In the dress shirt fold, the wrinkle appears usually in the arms. In the popular inside-out fold, the wrinkle usually appears at the end of the blazer... but not always does it wrinkle and this is what makes this particular fold more popular. It is far better than rolling or crumpling up your blazer which will guarantee wrinkles. When you choose a folding style, remember to pack your blazer last in the suitcase. This will also assist in avoiding wrinkles while en route to your destination.