Top Tips to Plan a Trip to Hoi An in Vietnam

Sunset over Hoi An

Hoi An is a wonderful former French colonial town located approximately halfway between Hanoi and Ho Chi Minh City, and about 150Km south from the ancient city of Hue. It’s a relatively small town so you can afford to take your time and explore the shops, restaurants, delightful colonial-era architecture and beaches at your own pace. Many of the hotels in town have swimming pools and their own bars and restaurants so whether you’re on a short holiday or backpacking around Asia, Hoi An is a perfect place to breeze through in a day or two or to really slow things down and stay for a week. In this article I’ll give you a taste of what to expect when visiting Hoi An.

While Hoi An does suffer from urban sprawl, much like most Asian cities, the cultural and historic heart of the city is compact and easy to get around on foot. Hoi An's Old Town is a UNESCO World Heritage Site. The oldest part dates back to around the 15th century when the Thu Bon River would transport goods in an out of a bustling trading port across South East Asia.

Eating in Hoi An

Dining in Hoi An

Hoi An has it all when it comes to food. All budgets are catered for here. From top quality gourmet restaurants providing the best Vietnamese cuisine cooked by professional chefs with first class training; to more international-themed restaurants where you can find more familiar foods; to local family-run eateries serving up local specialities to the classic tiny-plastic-chairs-and-tables street food. Immerse yourself into the street food culture because there's no opportunity to get tempted by fast food joints in Hoi An. In fact the whole of Vietnam doesn't have a single McDonalds.

The restaurant scene in Hoi An is truly alive and kicking. Not only are some of Vietnam's best chef's based here but there is a distinct international flavour. The old days of French colonialism clearly left it's mark in terms of cuisine: there are several French chefs plying their trade in Vietnam. Top picks include Green Mango and Thuan Y.

French Colonial-era Architecture in Hoi An

French Architectural Legacy in Hoi An

Hoi An was formerly a French colonial town and the French architectural influence is still found right throughout the very heart of the town. The big old colonial-era buildings adorning the streets may have seen better days but there’s an undisputed romanticism and rustic charm to them. It’s really worth strolling through the town both daylight hours and again the evening. The low lighting really does give the town an elegant glowing beauty.

Many of the original buildings that you see in Hoi An today are timber-framed buildings which are well-preserved and are arranged in a traditional street pattern reflective of 18th and 19th century Vietnam.

As well as the colonial buildings, there are also some wonderful bridges in town, the best of which would have to be the Japanese Covered Bridge in Hoi An's Old Town. The Bridge dates back to sometime between the 16th - 17th century. This means that this bridge was standing proud long before the French ever came and laid down their coats here. Although the French did make some changes to the bridge when they arrived. The bridge connects two important parts of the city and when the French came they brought with them cars.

While the bridge was later restored to original condition the French tried to straighten out the bridge so that it could accommodate cars. Thankfully this act of brutal vandalism was put right in 1986 and the bridge restored to its original shape.

Buying a Tailor-Made Suit in Hoi An

Hanoi’s affluent district can keep its international brands and their high-end boutique stores because Hoi An is the THE place to go for that hand-made, made to measure item. Most men wouldn't dream of leaving Hoi An without a quality new suit, and for good reason. You can choose any material, any colour, any style and have it measured to fit you like a glove. All for a lot less cash than an average off-the-peg suit from your local high-street. You might need to wait a couple of days for it to be ready and you might have to go into the shop several times to be measured but you know you’re getting a great deal.

Where is Hoi An on the Map 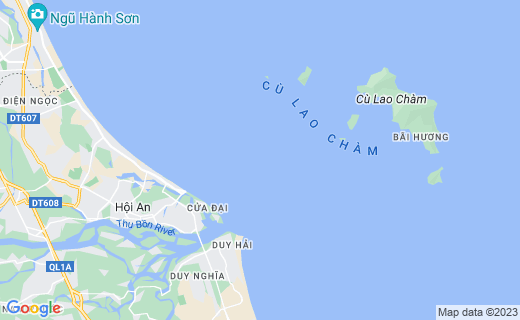 The nearest beach to Hoi An is called An Bang. It is located about 3km outside of the heart of Hoi An. You can take a tuk tuk or hire or bicycle or motorbike. There’s only one road out to the beach and it’s a pleasant and easy journey to do by bicycle. When you get there just park your bike in the secure parking lot and pick a spot that suits you on the beach. The beach has the added bonus of having plenty of palm trees scattered about so there’s always an opportunity to grab some shade and escape the powerful rays of the sun.

When you've had enough for the day simply make your way back to your hotel, take a final dip in the pool and enjoy a cocktail as the sun sets.

How Long to Stay in Hoi An

Some people will visit Hoi An for only one or two days as part of a tour between Hanoi and Ho Chi Minh. Technically, the town is small enough to cover in this short space of time but if you stay longer you get a greater appreciation of what it's all about. Personally, I would say that the food is so good that you'd want to spend a few days just to get around some of the excellent restaurants and sample the local delights.

If you factor in a day at the beach and a day trying on suits at a tailors - not to mention some good quality rest and relaxation at your hotel (many of which have swimming pools) and you can quite comfortably spend a week here.

If you fancied a day trip the city of Danang is only 45 minutes away by car. Danang has a big city feel to it and is somewhere to go if you want a multiplex cinema or air-conditioned shopping centres.