How to Survive a Kidnapping/Abduction (Tips)

How to survive a kidnapping/abduction

In the unfortunate event that a kidnapping or abduction does take place, there are three keys to survive.

Do not struggle or fight

Once kidnapping or abduction has taken place successfully, it is pointless to fight or become un cooperative. The Harvard law record has an interesting article about this. According a lecture given in Harvard by Harvard Kennedy School mid-career MPA student, Christopher Voss a 24 year veteran of the FBI, "physical resistance is met with increased physical abuse. They expect you to fight; they are prepared to beat you into submission. But they aren't going to kill you. If you fight at any other time, it's a good way to get yourself killed. You will pay dearly for it, and anyone else being held with you will pay dearly for it."

Follow closely to the letter - if not the spirit - of the captors' commands.

Following instructions and commands from captors' is an important key to survive. Obstinate behavior only serves to further antagonize captors'. It is pointless to refuse to do or say something that hostage takers demand. For example, in the Middle East and parts of Asia where radical Islam is practiced, it would be suicidal for a captive to be seen or heard praying unless it is to 'allah.' In fact, many hostage negotiators agree that the hostage should try and build some kind of rapport with the captors' by talking about universal subjects such as family or sports. Any discussion regarding politics or religion should be avoided. The establishment of rapport can allow a captive room to ask for items that would make their situation more comfortable such as blankets, drinking water and even better food.

Remain alert and observant of your surrounding

A kidnapping is a harrowing experience and is not uncommon for captives to become confused and disoriented especially if the initial capture was excessively brutal with the captive being beaten senseless or rendered unconscious. A captive should ensure that they maintain their sanity, remain alert and constantly observe and keep note their surroundings. Listening to the surroundings can be fairly good indicator of location. The sound of traffic, strong winds, and noises from beyond the walls can all provide good guesses. Read the schedules of the captors' to identify any weaknesses that can be exploited and attempt escape. However, the prospect of an escape should be weighed against many other factors before attempting an escape. For example; if one is held in a territory where there race is likely to give them away easily or if there are other hostages and an escape may jeopardize the lives of the rest.

If an escape succeeds then one should look for the nearest home embassy or high commission or alternatively the embassy of a nation friendly to the home nation. Reporting to the local authorities is not advisable especially in parts of Latin America where the authorities may be involved in the kidnapping. The captive should plan for a daily schedule of exercise to keep the body fit and supple. Any food provided by the captors' should be eaten regardless of the taste as this will keep the captive strong. It is common for captors' to take away a captives ability to tell time by dispossessing them of watches and holding them in rooms/cells without windows. If this happens, the captive should be able to tell day or night by listening for the intensity of noise outside and observing the alertness of guards. From day one the captive should keep a record of day and night by making a mark on the floor or wall for every passing day.

In the event that a rescue is attempted, an alert captive will be able to tell what is happening and take appropriate action. There are records of botched rescue attempts where captives are accidentally shot by their would be redeemers. To avoid such a situation the captive should immediately lie flat on the ground if they suspect a rescue is in the offing. If lying on the ground is not possible then they should sit with their arms folded across the chest. One should Wait for instructions and obey all instructions given. Captives should avoid being upset if a rescuer is not sure whether they are a terrorist or hostage. Even if they are handcuffed and searched, they should not resist but just wait for the confusion to clear. This way they can survive a kidnapping. 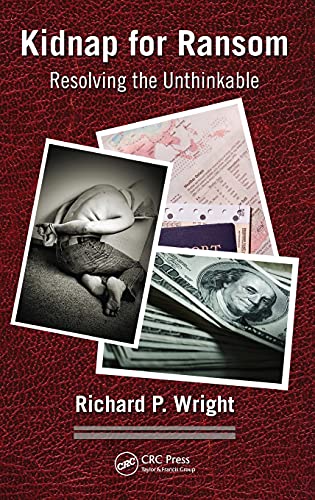 Kidnap for Ransom: Resolving the Unthinkable
Kidnap for Ransom: Resolving the Unthinkable removes the veil of mystery and dispels some of the myths surrounding kidnapping. The book provides security professionals, families, and law enforcement personnel with the modern tools needed to understand and effectively respond to the crime of kidnapping.
Buy Now