I Miss the Texas Horned Toad 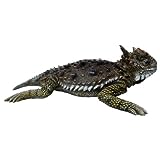 I regret that this is a species much loved as a child that I have never been able to introduce to my kids. They truly have missed out.

The Story of Old Rip

Rip spent the last months of his life living in a fishbowl in the front window of Mr. Woods' house. During winter he caught pneumonia and died on January 19, 1929, just under a year from his resurrection from the cornerstone. A casket company provided a glass case, a monument company provided a marble base and a taxidermist preserved Rip all for free.

Old Rip was kept on display at the Eastland County Courthouse. When John Connally was running for governor of Texas in 1962 he made a campaign stop in Eastland. Wishing to catch a photo-op with Old Rip, he held the fragile toad up by his hind leg, snapping it off. This is the same John Connally who went on to be wounded in the same incident that killed President John F. Kennedy just a year later.

In 1971, Old Rip was toadknapped and was missing for about a year before a tip led to his recovery at the Eastland County fairgrounds.

From June to August, 2002, Old Rip was a guest at the Best of Texas Festival at Six Flags Over Texas.

To this day, you can visit Rip in his casket at the north side of the Eastland County Courthouse

If the legend of Old Rip sounds familiar, then you may recall seeing the 1955 Warner Brothers cartoon entitled "One Froggy Evening". Famed cartoonist Chuck Jones was inspired by the strange Texas tale and created the cartoon. In the cartoon they pry open a bank cornerstone and discover a living frog who just so happens to sing ragtime jazz, but never when anyone else is watching. This animated short is considered a classic and listed as #5 in the 100 all-time favorite cartoons.

The frog in the cartoon was named Michigan J. Frog and became the official host of the WB Network.

Have you ever physically seen a horned toad yourself?