Overview. If you look a map of Portugal about midpoint off the country’s coast just north of Lisbon are a group of islands in the Atlantic about ten kilometers from the coastal town of Peniche. Known as the Berlenga Islands in English they are better known as the Ilha de Berlenga in Portuguese. The main island is part of a larger archipelago of mostly uninhabited islands. Far better known among Portugal’s islands are the Azores and Madeira which are more populated, celebrated, farther out in the Atlantic, and more heavily visited with regular commercial air service. Ilha Berlenga, the largest of the Berlengas archipelago, is less than one mile (1.5 kilometers) long, less than a half mile (800 meters) across, and an extension of Cape Carvoeiro. Until recently the islands’ small population mainly survived on fishing the rich waters in the surrounding Atlantic which include mackerel, mullet, and swordfish. The islands are now recognized as a UNESCO World Biosphere Reserve. Bird colonies are numerous, especially nesting gulls, puffins, and cormorants, so take precautions. If you hike the island stay on the marked path as 23,500 acres are protected habitat.

Geology and geography. Known for its granite cliffs, coves, valleys and caves, Berlenga serves up a rich variety of scenery for such a tiny place. The pink granite contrasts beautifully with the jade waters. The Gruta Azul (Blue Grotto) and marine tunnels such as Furado Grande (Big Hole) highlight the rugged coastline. Furado Grande is walled by 200 foot granite cliffs along much of its 230 foot length. Although it looks like a fjord it is actually a ria, or a sunken river. Despite the striking cliffs, rocks, and water, the island is mostly bare of plants and vegetation. Wind batters the island constantly which partially explains the lack of growth but the summer wild flowers are beautiful. The highest point of the islands is 85 meters or 279 feet and its possible to view mainland Portugal when visibility is good.

Historical Sites. The 16th century monastery on Berlenga Grande, the only populated island of the group, was founded in 1513 by monks from the Sao Jeronimo order. The purpose was to assist navigators and shipwrecked victims. The monastery was abandoned for a number of reasons chief among them a lack of presence by the late 16th century. By the 17th century (1656) the Fort of Sao Joao Baptista de Berlengas was built atop the ruins of the monastery and successfully resisted assaults from the Barbary pirates. It can be accessed by a stone bridge from the main island. The ninety-five foot (29 meters) lighthouse which sits on Berlenga Grande was first constructed in 1841 and affords 50 kilometer views weather permitting.

Visiting/Getting There. Regular ferry service leaves from the town of Peniche harbour and takes about 30 minutes to get to Berlenga Grande. There are also independent charter companies that will take you there. Ferry boats land at Praia do Carreiro do Mosteiro, which is named after the monastery. This affords a great place to view clear, but cold, water, and the restaurant is nearby. The pinkish sand is the result of the eroded granite. Private boats also embark to get a closer look at Furado Grande but these should be arranged once you are on island.

Where to stay. Berlenga does not encourage extended stays mostly because of the lack of accommodations. It’s best for a day trip but it you must overnight on Berlenga Island there are options limited only to the campsite, the Mar e Sol Restaurant (book ahead for one of the six rooms), and the Forte Sao Joao Baptista, which has limited facilities and amenities but does serve as an overnight hostel. The choice of lodging in coastal Peniche is much better and that’s where most people stay.

Weather/Climate and water conditions. In general the islands are storm and wind-battered which makes summer the most reasonable season to organize a visit. The water temperatures are cold: expect 18º C, which is 64.4º F. Scuba divers will opt for a wetsuit with a hood (7 mm recommended). Snorkelers and swimmers can use a wetsuit as well but air temperatures are a balmy 25 to 30º C, or 77 to 86º F, in the summer. The weather is very changeable any time of year and boat trips from Peniche can be cancelled because of rough sea conditions.

God, Gold, Glory, and Spice: When Portugal and Spain Ruled the World. 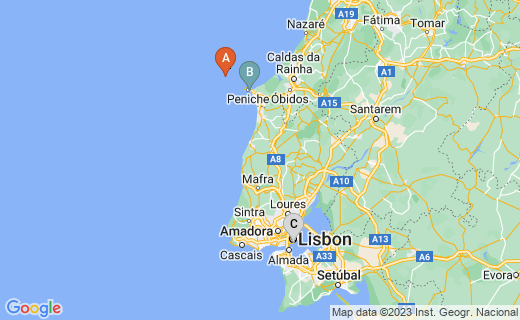