In the footsteps of Eve at the West Coast National Park, Churchhaven

“A young woman paused at the top of the dune and looked back towards the ocean. She shifted the dead seal pup into her left hand, exchanging its weight for the long digging stick and pieces of driftwood that she carried in her right.” These two sentences are from the book In the Footsteps of Eve by Lee R. Berger (Adventure Press - National Geographic, 2000), subtitled The Mystery of Human Origins .

The footsteps in question were discovered by geologist Dave Roberts in 1995 on a beach at the achingly beautiful Langebaan Lagoon, which lies about an hour-and-a-half's drive, or around 100 kilometres, north of Cape Town.

Berger descibes in poignant and creatively-reconstructed detail a possible scenario for how the footsteps came to be laid down on that beach some 117,000 years before. He sets the scene thus: “The cold winter rain (the Western Cape in South Africa has a Mediterranean climate, meaning the rainy season is the winter months, roughly from April to August) that had lashed the coastline for almost two days finally let up, and slivers of late afternoon sunlight emerged from behind heavy clouds. The wind died down and with it went the white sea-froth capping the gray-green swells of the southern Atlantic.”

One of the first of these tiny animals was a steenbok, one of the smallest antelopes in Africa. As it emerged, it spotted a hyena coming out of a bush some hundreds of metres away. “Unlike bigger antelopes, which would have bounded away, the steenbok's survival lay in its ability to fuse stillness and silence.”

How it could have happened

How does Berger know about these events, which occurred more than 100 millennia ago? “The survival of these prints (the imaginary “Eve's”), laid down in the wet sand countless years ago by someone walking over the dunes to the seashore, is remarkable in and of itself. What is quite extraordinary is that the hyena and steenbok tracks were also preserved, hence the inspiration to reconstruct the scenario in which they may have all passed by each other within the space of less than an hour.”

How did this preservation happen? Berger's theory is that “The girl looked back and saw the startled steenbok spring away. Although she was not to know it, the sand slide buried her footprints, the steenbok's and hyena's as well, beneath a layer of shell-rich soil. Within half an hour the rain returned and the sand covering the prints was saturated, beginning a process that would preserve her prints in sandstone for millennia.”

When I read Berger's evocative and thought-provoking book some years ago I was immediately reminded of a wonderful holiday I had spent with my family in the ancient fishing village of Churchaven on the Langebaan coast. Churchhaven is within the boundaries of the West Coast National Park and is relatively unspoilt by the dreadful “development” that is ruining other parts of the Cape's West Coast.

Indeed only descendants of the original inhabitant of the village are allowed to own property there and so we were extremely lucky that a friend of our was such a descendant and allowed us the use of her cottage overlooking the lagoon.

Legend is that Churchhaven was founded by George Lloyd, a deserter from the Confederate ship Alabama , which anchored in the lagoon back in July 1863. The area had been for centuries inhabited by descendants of the Khoisan, the Dutch settlers and others and the coming of Lloyd added yet another strand to the complex weave of culture and race. Indeed, it is said that the complexity of the racial mix in the village even confounded and defeated those indefatigable separaters of races, the bureaucrats of the apartheid regime who with some success separated the people of the rest of South Africa and captured their “races” in the infamous Population Register, which determined who could get married and who could not, who could live where and who had to live elsewhere. In Churchhaven these bureaucrats were defeated by human nature and gave up.

The lagoon itself is one of only three in the world that is fed by the sea and not by a river flowing into it. It is about 17 kilometres long and the southern end is a shallow salt marsh. It has an amazing richness of bird life above the water surface and underwater the lagoon is acknowledged as one of the most biologically productive in the world. The lagoon is an important Ramsar site, although it is now under serious threat from port developments. 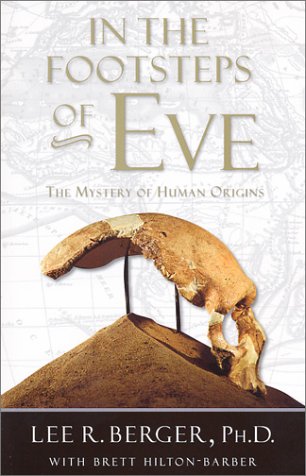 In the Footsteps of Eve : The Mystery of Human Origins (Adventure Press)
Buy Now

When we were there in 1989 we were given harders , little fish that are dried for a while in the sun and wind, and then roasted over an open fire. We sat around the fire eating the bony but tasty fish, eagerly watched by sea gulls. As we finished eating off the bones we would throw them over our shoulders and the birds would swoop down and catch the bones before they touched the ground!

We were also given (very illegally, it not being the right season!) huge lobster tails fished that morning out of the cold, clear waters of the lagoon. Incredibly tasty!

The generosity of the local people was simply overwhelming. That meal of lobster tails would have cost a few hundred rands in a restaurant, and we were given them as casually as if they were worth nothing.

From 1 August to 30 September each year is officially flower season in the National Park and at that time the incredible richness of the famous West Coast flowers can be seen. These flowers come, seemingly out of nowhere, and cover the earth with a variety of colours that is difficult to describe. Good examples of pictures of the flowers can be found on the website of Langebaan Tourism.

And so we shared some of the rich diversity of resources that that mitochondrial Eve whose footprints were found in the sands of Langebaan, whose real name we will never know, but who is connected to us all through 100 millennia of human history.