Leo Carrillo State Park is one of my favorite beaches in Southern California because it is a mixture of sand and cliffs, tide pools and sea creatures, all seen from a beautiful hiking trail with an amazing view. It is part of the ocean biome called the Intertidal Zone, the area in-between the low tide (above water) and high tide (under water) marks. The intertidal zone can have many different kinds of habitats for organisms like coral, starfish, and sea urchins. With my camera, I walked out over the rocks and peered into the tide pools to capture the magic that is there. To better understand this particular beach, it is good to know about the high, middle and low tide zones.

The High Tide Zone is only covered in water when high tides occur. It is a salt drenched environment. Although the large amount of water is not high enough to preserve a lot of living organisms, there are some that do last in the high zone. Some of the primary organisms are anemones, barnacles, chitons, brittle stars, crabs, green algae, mussels and sea stars. There are rock pools with small fish and big seaweed. The hermit crab survives easily because it is protected in a shell. Its shell protects it from the drastic temperatures to a degree. In addition, it can carry water in its shell.

In the Middle Tide Zone temperatures are not as drastic because of the lesser amount of blunt exposure from the sun. Usually the waves are more acute than the spray and high tide zones. The organisms are more complicated and usually bigger than the organisms in the splash and high tide zones. There are more living things in the middle zone than the high zone and the spray zone. Organisms that live in the middle zone consist of anemones, barnacles, chitons, crabs, isopods, limpets, mussels, sea lettuce, sea palms, sea stars, snails, sponges, whelks and green algae. Zooplanktin, shrimp, little fish, sea urchins and krill are provided a habitat by the rock pools.

The Low Tide Zone is submerged with water for a longer period of time only when low tides occur. Compared to the other three zones there are many more living things, a large one being seaweed. The life that lives in this zone usually doesn’t do well with times of no water and drastic temperatures. Some organisms of this area are abalone, anemones, brown seaweed, chitons, crabs, green algae, hydroids, isopods, limpets, mussels, nudibranchs, sculpin, sea cucumber, sea lettuce, sea palms, sea stars, sea urchins, shrimp, snails, sponges, tube worms, whelks and surf grass. This zone is protected from large predators such as large fish because of the wave action and the water being relatively shallow.

Get ready for LOTS of muscles. It is tough living in the Intertidal Zone because of times of dryness, thrashing surfs, and not being able to find food. Mussels, as well as chitons, limpets, snails, urchins, barnacles and crabs, shield their bodies with things like a shell or an exoskeleton. One of the most firm organisms in the armor clad is the mussel. They grip to rocks regardless of the huge force of the waves. Mussels are consistently increasing their bond to the rock. When the wave covers a mussel in water, it reaches out its foot and increases its pull to the rock by making amazingly strong protein strands that look like hairs. Even though the mussel can stick to rocks really well, it cannot always avoid the starving star fish.

I looked and looked for a starfish, but couldn’t find one on the day I was there. I learned that when a sea star discovers a mussel for lunch, it grabs to the shell of the bivalves with its thousands of tubed feet. Then the star fish pulls the shell apart to crack it open. After the shell has been cracked with an opening, the star fish releases its stomach from its body and shoves it into the crevice of the shell it made. Then the stomach digests the mussel creating a delectable sludge that the star fish’s stomach is able to suck up.

If you are ever in the area of Malibu, I recommend taking a trip to Leo Carrillo. Just make sure you bring some good shoes and a camera! 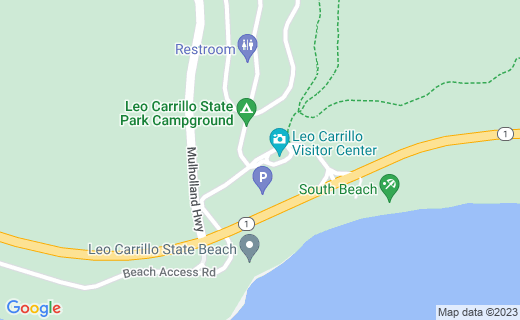