International: Belated Kudos to France For Extending a Helping Hand and For a Job Well Done !

Among other things, ME loves to travel and when possible write about it.

I WISH AIRLINES AND AIRPORTS IN AMERICA WOULD REMEMBER they are part of the "Service" industry; with the emphasis on "Service". Who are they to serve? Why, their customers of course. Do they do this well in America ... in a word NO !

But, it can be done, which is why I decided to relate this story from well over a decade ago on a trip to Germany that began as a fiasco, but fortunately ended well. What I am about to tell would, sadly, never happen in America, sighhhh.

ON A DARK, DREARY, MISTY NIGHT AT CHARLES DE GAULLE AIRPORT in Paris I was ushered off an airplane to vehicles awaiting at the bottom of the ramp. The plane was late and the vehicles were there to shuttle myself and four other passengers to the terminal to catch our next flight. Before I dilate (a word I picked up from a professor I have listened to a few times), about the beneficence from the security staff I was about to receive, I think you might find the story of how I got there, a place I wasn't supposed to be, in the first place.

My wife, Mary, and I had planned a trip to Germany in order to use up some expiring RCI timeshare points; she lived near Jacksonville, FL and I lived near Washington D.C. We were to meet at the Baltimore-Washington National Airport where I would board her flight from Jacksonville, FL to the Philadelphia airport; at which time we would catch a non-stop flight to arrive in Munich, GE the next morning ... she made it and I didn't; which leaves with ... "the rest of the story".

I TRAVELED A LOT WHEN I WORKED FOR THE Department of the Air Force and needless to say, I ran through the closing door of the flight I was supposed to be on; this was in the day before there was a TSA. Simply put, I am not known for getting to places well ahead of time and my trip to Germany (and now there was a TSA to worry about) was no exception. I am a bit of a workaholic, or so Mary says, and you can guess what I was doing on the afternoon I am to leave. Yes, working.

It is a 90 minute drive from my house South of D.C. to BWI where the route skirts around the periphery of that fine city. That was supposed to get me to the TSA line about 45 minutes early. And it would have, if it weren't for a weak-end traffic jam on the way; something doesn't happen very often, but is certainly not unheard of. As the minutes started ticking by while I was resting in place on the freeway, my blood pressure and heart rate began to rise proportionately.

I did arrive at BWI before the her plane left, but the door was closed and the plane was being pushed out, Crap. OK, her next stop was Philadelphia, about a two-hour drive up I-95 and off I went chasing after her. Her lay-over was long enough for me to get there ... if everything went perfectly. Needless to say, it didn't. I was half-way through the concourse when she called and told me they were closing the doors ... I even heard it over the phone ... and Mary was off to Germany; she was NOT a happy camper. :-(. 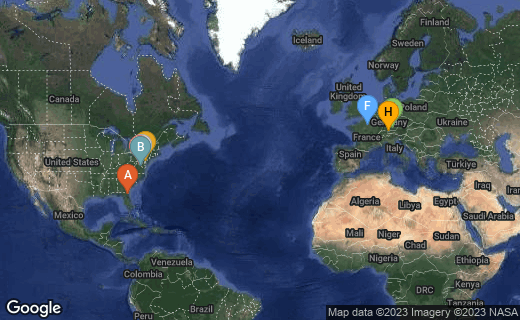 WHAT TO DO, OH WHAT TO DO? It was now about 10 PM and it was drizzling on this side of the Atlantic as well. The solution was calling Delta Airlines to see what they had that would get me to Munich sometime soon; I am glad I had a lot of frequently flyer miles left. I had the great fortune of finding a flight that left the next afternoon and would get to Munich 11 long hours later, along with that stop in Paris. The next day, I left in time to arrive 3 hours early, aaaand another traffic jam. I damn near missed that flight too !! But, I didn't and found myself landing at Charles de Gaulle airport on another Dark, Dreary, and Misty Night; and then walking down the stairs from the plane to the awaiting cars.

The airline or airport or both knew in advance (something unheard of in America) that we were going to be late and that there were passengers on board who were going to miss their connecting flights if something weren't done. In America, they would have let you miss your flights ... but the French. Instead taxing forever and then taking the time to pull up to a gate to deposit us, they parked out on a taxi way and brought transportation to us! Five of us debarked the plane, climbed into one of two cars (I guess one was going to terminal 1 and the other to terminal 2) and raced off into the night.

My escorts just didn't deliver us to the terminal, no, they escorted me to my plane, whisking me through security and into the line that was boarding the plane to Munich at that moment. Now THAT is what customer service is ALL about !!

The rest of the trip was, fortunately, uneventful. I arrive in Munich the next morning, only a day late ... it could have been much worse.

How did my wife fare? I guess it depends on your point of view. When Mary landed in Munich, she was crying, having realized she was alone, in Germany, didn't know the language, and really, really pissed. She is not the type to go out on her own in a strange city and investigate; Mary was going to stay put. Fortunately, there was hotel attached where she was able to get a room. Better yet, it had a spa where she treated herself to a massage. Better yet still ... she found a small casino to bide her time until she could start berating me.

We finally met up the morning I arrived and began what turned out to be a wonderful week in Germany.

Where Are You From?

How Old Are You?