Top Tips for Visiting the Ironbridge Gorge in Shropshire

Where is The Ironbridge Gorge

The Ironbridge Gorge is a small village situated alongside the River Severn in the English County of Shropshire. It is a traditional gorge village that evokes those images of an old English settlement that has somehow escaped the throes of modern life and modern developments. The Ironbridge Gorge area is pretty much as it has been for the last 300 years. 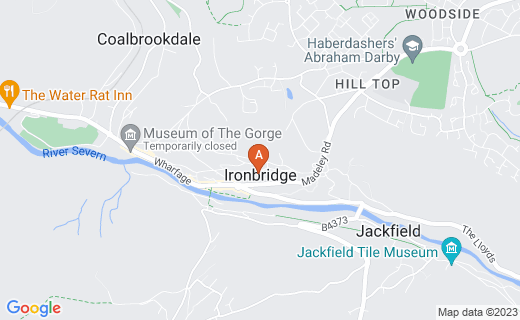 Ironbridge and the Industrial Revolution

Ironbridge's most famous 'revolutionary', if you like, was a gentleman named Abraham Darby. Darby had perfected a a technique that allowed iron to be produced much more cheaply than in the past. This led to an explosion in the many ways in which iron would come to be used in the following decades. There is a school named after Abraham Darby in nearby Madeley. Many children from the local area go to the Abraham Darby school.

In fact it was Darby's great Grandson, Abraham Darby III who would put this technique to use in such a way that make Ironbridge famous throughout the world. In 1779 Abraham Darby III set to work on the construction of the worlds first 'Iron' bridge. No bridge had ever been constructed entirely out of iron at this point and it was the advancements in new technologies spurred by the industrial revolution that made construction possible. The construction process for the ironbridge took only 2 years and was completed and opened in 1781.

The Ironbridge still stands in fine shape today and is open for pedestrians to walk across all year round. Until a point in the 20th Century the bridge had been open to automobiles via a toll function but this came to an end to protect the structure from any damage. During the course of the 230 year life of the Ironbridge it's shape has evolved slightly. When the Ironbridge first opened it was almost flat.

However, over the years the river banks have pushed inwards meaning that the Ironbridge and been compacted and so it has had to push it's way upward and bend at the middle. Older people will often recall how they used to be able to stand at one end of the bridge and see right into the entrance of the Tontine Hotel at the other side. Nowadays, the view has been reduced to only the upper floors of the hotel due to the bend in the middle of the Ironbridge.

These days the village and the road that runs parallel to the Ironbridge has a tendency to flood in times of heavy rain. However, various designs of flood barriers have been introduced over the years to protect the houses and other buildings in the gorge. In 2013 a brand new flood defence was introduced to the Ironbridge Gorge which enabled the road to remain open during times of flooding.

There are many wonderful old pubs and guesthouses in the Ironbridge Gorge as well as an old church and a number of shops, restaurants and tea rooms. Summer is a particular favourite time of year of mine when the sun hangs over the gorge until late into the evening and the River Severn runs calm and peaceful reflecting the clouds and the sky from high above.

Ironbridge is now mainly a tourist destination and the businesses in town reflect this. There are a number of cafes, bars, restaurants, tea rooms and guest houses etc. but little in the way of offices or other industries. There has been a teddybear manufacturer in the village for over 80 years producing Merrythought Bears. The Merrythought factory is still going strong and people from all over the world are known to collect these hand-made Bears. Every day that the shop is open a life-size Merrythought Bear stands out front. The outfit is changed every now and again to reflect a current theme.