Nestled in the "holler" and surrounded by the rolling hills of middle Tennessee, if you go to the top of the mountain in Bear Knob on the right weekends you can hear the hills sing, and you can see the smoke rising up from the farm owned by Hippie Jack and his wife "Mississippi". 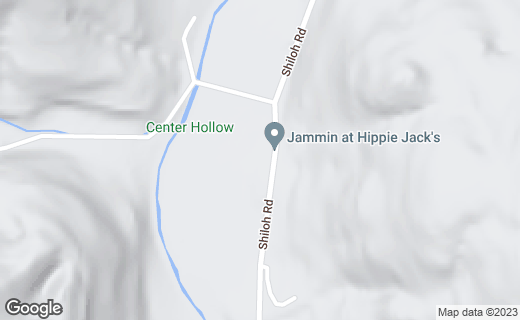 Jammin at Hippie Jacks is a festival that is located close to the small rural community that I was raised in, and it's even farther back in the sticks.

I live in a small community in Tennessee called Hanging Limb, and if you take a right down sunk cane rd. and follow the winding rd to the bottom of the bottom you will come to an old gravel road named Shiloh. There you will find a mostly quiet place almost forgotten. With beautiful scenery and no cell phone service for at least 10 to 15 miles.

Every Memorial Day Weekend there is a festival that is hosted on Shiloh Rd. called Jammin At Hippie Jacks. This festival has been an annual event in this area since at least 2008. The festival hosts several different musical groups and artists belonging to a genre of music that Jack likes to call, "Americana". To me Americana seems to be a mix of "old timey" bluegrass with the folk music from the 1960s.

Some of the artists who have performed at The Jammin At Hippie Jacks festival are The Steeldrivers, Kraig Kenning, The Danbury's, Flea Market Hustlers, and Jamie and The Bandits.

The first time I made my way to Hippie Jack's farm, I was a junior in High School and my mom and dad took my friend Jessica and I down to see what Jammin At Hippie Jack's was all about. There's not a lot that goes on in our neck of the woods, and it's safe to say I was thrilled to be there.

Our friend Sabrina and her family were camping through the weekend at Hippie Jack's first music festival. We begged my parents to let us stay, but it would be the next year before I was able to stay and camp with the new family that was forming on the farm.

Jack Stoddart, better known as Hippie Jack, moved to our area long ago and made himself at home on his farm in a little place us locals call Shiloh. With help from some of the local people in the area, Jack and his wife lived a simple life.

When Jack moved to Tennessee from Florida, he slowly began to delve into his photography more and more. Hippie Jack first became known for his excellent photography. Taking many photo's of the local's in the area, his work hangs in many places from the local hospitals to the county office and many places in between.

I am excited when I happen upon some of his work hanging in local offices around the towns. Upon my first trip to the festival, I bought a small picture from his gallery and I was lucky enough to have Hippie Jack sign it and I even got to have my picture made.

As time has gone on the festival has changed very little. The biggest change being the rise in price for admission along with Jacks recent decision to cancel his Labor Day Festivals for a more worthy cause which I will discuss more about below

The festival does seem to get just a little bigger and a little better every year, as the turn out has grown. This has led Hippie Jack to make subtle changes throughout the years, such as adding more room to camp as you can see in the map below.

Hippie Jack also records the concerts and they are featured on a local television channel, WCTE. The festivals are always a great time, and the people are always friendly. Even though it is so close to my home, I still don't know where most of his visitors come from. it is safe to say they come from all over, as Hippie Jack's magic has spread far and wide.

To learn more about the festival and Hippie Jack Click Here

Below are a few random pictures from some of my experiences at Jammin at Hippie Jacks and I may add more as I dig them out.

Now, Hippie Jack's story doesn't even begin to stop there - nor have I covered anywhere near all the bases to his incredible journey. However, this article could be nowhere near complete without informing you of the amazing work that Jack has began to accomplish in the past couple years.

Doing away with his Labor Day Festival, Hippie Jack now hosts a slew of free concerts through the months September through December. Jack leaves his bus parked near the entrance of the festival and he ask that you bring some form of donation: Coats, food, toys, bikes, books, and more are welcome, and after leaving your donation on the bus you are welcomed into the farm for a night of great music and company. You're also welcome to make up a campsite on his farm and spend the night.

Jack spends a good deal of his time traveling around the area and passing out the donations to the local people. His bus is transformed to a traveling donation wagon. His benefit festivals in the latter months of the year have seem to become Hippie Jack's major mission right now. He has made a lot of effort in his goal to give back to the peace and the place he now fondly calls home.

"Mountain Irony
There is shadow irony to our efforts. my efforts, to try and help a community of people who are quite different in their world view than I. Part of it has to do with my relationship 45 years ago with the poor, rural, southern people after I escaped the insanity in South Florida and came to Tennessee in 1972. Scarface was true. It was poor, rural, southern people who showed me how to survive in a log cabin with no running water and only a fireplace for heat.
We collect and distribute food, children’s books Christmas toys and most importantly new and like new children's coats on the Plateau. Last winter we distributed 5 busloads of food, over 3,000 books, 45 new bikes, several scooters and a large amount of Christmas toys. Most importantly over 400 new and like new children's coats. Sometimes the children will cry over a new coat.
We have paid for and contracted bathroom, hot water heater and roof repair. We facilitated the installation of a new central air unit for Frankie Murphy’s single wide trailer. She is 79 and needs some help from time to time.. We’ve provided hospital beds and wheelchairs.
We are scheduled again to provide Christmas for the Mountain HeadStart program in Monterey TN. Last year we brought wrapped gifts for 57 children and pizza for their families (more than 250 fed) and then spent a couple of hours handing out food from the bus as they waited quietly in a cold foggy rain to have a turn to get handed a box of tuna, peanut butter, dried beans and assorted non perishable's.
Our latest effort is to provide weekend meals for the students attending The Reach Academy in Livingston TN. It has come to my attention that the severely underpaid teachers have been using out of pocket money to provide weekend meals for these students who attend a school designed to assist older students, 16-19 year olds who are at risk to not graduate. These are people living sometimes without running water and necessary toiletries, not to mention nutritious food. The student body varies from 30 to 60.

All these efforts rely on our five fall benefits. We host all of them in our Music Sanctuary on the farm here in middle TN. These are non ticketed music events created to collect the items we distribute, to raise awareness and to increase our partnership with empathetic people and companies. Our goal is to bring them to the table through great music. We are a 501c3 and 100% of all donations are distributed by us. Keep an eye on Jammin at Hippiejacks Facebook for more benefit information.
It’s not easy changing the world, but that's the plan. A little or a lot, somethings gotta give.
We endeavor to persevere.
Sanctuary Schedule 2017
August 12th...Liberty Circus
Sep 23rd
Oct 28th
Nov 18th
Dec 16th
directions https://www.youtube.com/playlist…
Hippie"