Carolyn discovered her love of the American West while living in the Sonoran Desert between 2000 and 2010.

If you have never been to Jerome Arizona, you are in for a real treat, especially if you enjoy seeing a real piece of living history. Jerome is an old mining town that is one part living history exhibit and two parts ghost town. And unlike most ghost towns in Arizona or elsewhere in the American west, this one is purported to have real ghosts. Jerome is north of Prescott on highway 89. To get there, drive on Highway I-17, then through Verde Valley. The drive through highway 89 is a beautiful scenic by-way, and an alternate route if you are coming from Prescott.

Fun fact: The nearby town of Prescott is pronounced "Press-kit" by the locals. Rhymes with biscuit.

You will find that it is very difficult, if not impossible, to maneuver a long RV up the road that leads to Jerome. The road winds tightly with several hair-pin turns up the edge of the mountain’s foothills. I encourage you if you are an RV-er to take a day-tripping vehicle up the roads that lead to this site.

You may also find your trip enhanced by adding to your summer reading list Angle of Repose, by Pultizer-prize winning author Wallace Stegner. This novel can give you a sense of what it might have been like to live and work in a mining camp during the late 19th century. The ambitions of the men and women (miners, engineers, and their families) who made their lives in mining work are a fascinating and imagination-provoking topic that Stegner skillfully explores.

In Jerome you will want to spend at least half a day exploring the Douglas Mansion mining museum that rests atop a foothill at the edge of Jerome. This mining museum, which is operated through the U.S. Forest Service at Jerome State Historic Park, occupies the 8,000 plus square foot Douglas family mansion built in 1916. The mansion belonged to executives in the mining company. It was an architectural showpiece built from local materials and offered guest quarters for investors, but was converted to a museum in the early 1960s after mining operations ceased. According to forest service literature, the original cost for entry was only 25 cents. This museum is probably the focal centerpiece of your road trip to Jerome. It sits on top of the Little Daisy mine and offers some high quality exhibits for a museum of its size.

Part of the experience touring the old Douglas Mansion is walking on the creaking floorboards as the building sways in the wind atop this hill. I especially enjoyed seeing the historical artifacts and photographs that told the story of the mine. Outside of the museum for free you can see the heavy equipment that the was used to operate the mine in the days before electricity. And inside the museum you can see quite a variety of things, including old Kodak cameras from the late-19th and turn of the 20th century.

I think the one exhibit that made the most lasting impression on me was the museum's amazing three-dimensional model that shows the labyrinthine mine shafts within the mountain. This model is to scale, and shows how the mine shafts go over a mile deep into the mountain. If you are a fan, like me, of the Lord of the Rings movies, imagine going through the mines of Moria. Then think about the men who worked in these mines, how little technology they had, compared to us, to explore these mines. Miners’ work was indeed very dangerous, and the miners took their lives into their hands when they were working miles deep in these mine shafts. They were definitely men of adventure.

This museum has a strong family appeal. My children enjoyed viewing the minerals that were extracted from within the mine. The mineral room has a black light that you can turn off and on so that you can view the fluorescing qualities of the mineral specimens. The rocks and minerals that come from these mines are truly spectacular. Glow-in-the-dark rocks have a way of adding a significant cool factor to any museum visit!

The views from the museum are spectacular too. If you are a photographer you will want to bring your camera with you so you can take photographs of the expansive vistas, including the surrounding Verde Valley and the blue mountains yonder (The San Francisco Peaks of the Mogollon Rim). The museum is has large picture windows that show a 360 degree view of the surrounding countryside and the Verde Valley far below. The parking lot is at the edge of the foothills, so you can also park and take photos from the view areas near your car.

Prepare yourself for some wind. We went in April, hoping to eat a picnic lunch at the provided picnic tables. We were surprised by the strong, gusting winds that blew us around and blew our food around. We ended up eating our picnic in the car.

The Douglas Mining Museum museum, perched atop a hill with vistas that are nothing short of breathtaking, once belonged to the Douglas family that owned and operated the mine. the old mansion house is the site of the museum. With its creaking floors perched high above the foothills, you will be glad to know that the building isn't going anywhere during your visit!

Other Things to Do in Jerome

As I mentioned before, Jerome is a kind of living ghost town, because people are still living in and occupying these historic mining homes. I can’t personally imagine living in these homes, but they often have spectacular views. Talk about your ultimate fixer upper. Some of the homes are now too derelict and unsafe to live in, but some of these homes have been restored and remodeled and now house 5-star restaurants, bed and breakfasts, and boutique shops. The Jerome Artists Cooperative Gallery hosts 40 Arizona artists' work.

But there's another reason Jerome is called a ghost town. Many people who have visited Jerome report having paranormal experiences there, particularly at the Jerome Grand Hotel, which offers a mid-week ghost tour and operates as a bed and breakfast.

Is Jerome Arizona Haunted? Are You Convinced?

Food and Lodging in Jerome

With a population of only 500 people, you might be surprised to discover that there are lots of opportunities for making an overnight stay or even longer in Jerome. Jerome hosts several bed and breakfasts and two hotels. Ghost City Inn comes highly recommended, though the other B&Bs rated well, too.

If you visit during a busy time, Cottonwood nearby also has several hotels, and 20 miles down the road, Camp Verde has even more to choose from. When we went for a last-minute visit, all the hotels booked up quickly, and by 5:00 in the evening we were scrambling to find a suitable non-smoking room. It is best to schedule your itenerary so you can book your hotel ahead of time, because even during slow economic times, Jerome is a hot vacation spot in the summertime. It's refreshing cool summer evenings draw hosts of Phoenicians from the hot lower Sonoran desert.

Jerome hosts restaurants, too. Like nearby Sedona, Jerome has a variety of quality culinary offerings. Nearby Cottonwood and Camp Verde have many restaurants as well.

Visiting Arizona? Check Out My Other Articles About This Fascinating State! 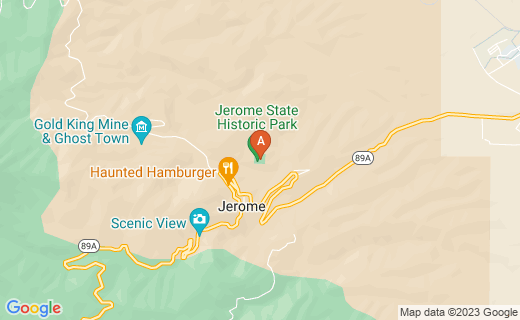