This was the famous couplet written by Mughal Emperor Jehangir in Persian language while sitting in a houseboat in Dal lake of Kashmir Valley. He meant, “If there is ever a heaven on earth, it’s here, it’s here, it’s here”. Jehangir was a great patron of art and the charismatic Kashmir had impressed him so much that it’s beauty was glorified generously by the regal Emperor.

This hub is the second part of the expansion of my ultimate dream vacation in Jammu & Kashmir. The Kashmir Valley or Vale of Kashmir is a valley located between the Karakoram and the Pir Panjal Range in the Indian state of Jammu and Kashmir. It has an area of about 135 km length and 32 km width, flanked by the Jhelum River. Sparkling lakes, colorful Chinar trees, flowerbeds, Mughal gardens all contribute to the heavenly ambience of Kashmir Valley that is a Paradise on this earth. Let’s have a look at some of these spell-binding spots.

Verinag town is the first tourist spot in Kashmir Valley one may come across when traveling from Jammu. Lying at the entrance of Kashmir Valley, Verinag hosts a spring that is said to be the major source of Jhelum River. The spring that was spurring from a mountain scarp surrounded by evergreen forests got noticed by Emperor Jehangir and he constructed a tank in octagonal shape around it. The arcade encompassing the spring tank in lush green backdrop chills the eyes of the weary traveler. The crystal blue water collected in the tank flows through a long canal and reaches the Bihat River. It is also a revered place for Hindus as there is a ‘Shivling’ in one front of one of the arcs.

A garden also was constructed facing the tank of the spring by the Emperor in Mughal style. His son Shahjehan further embellished the garden with cascades and aqueducts using the water from Verinag spring. With velvet green lawns, pine trees and Chinar trees, Verinag garden amuses everyone in its meandering waterways. Also, a temple with ancient idols of Hindu goddesses exists here.

Perhaps, Srinagar might be the heart of this Paradise where major lakes and stately gardens lace radiantly. Famous for its traditional handicrafts and dry fruits, it is also the summer capital of the state of Jammu & Kashmir.

As Srinagar has an abundant list of tourist spots, I think it’s better to describe them in a separate hub. They are:

Gulmarg meaning ‘place of roses’ is really like its name. This valley is a rolling green meadow that becomes teemed with beds of bluebells, daisies, forget me not flowers and buttercups when spring arrives. Even if it’s a resort of all weather conditions, winter is what most enchants the adventurous traveler. Snow pavements bordering the walkways is the much coveted view offered by this vibrant, gorgeous, natural beauty Gulmarg. Long-run skiing and snowboarding are the two main winter sports loved by adventurers and Gulmarg snow slopes are the ideal platform for ski beginners.

Being the base ground for trekking in the Pir Panjal range, Gulmarg offers golf-courses also in its green plain meadows. It is the summer tourist destination for many, owing to its pleasant, cool climate suitable for indulging in sports activities.

This dreamy destination imposed in high Himalayan peaks meaning ‘meadow of gold’ is the rendezvous of glaciers and placid lakes with snowflakes scattered everywhere. The drive to Sonamarg itself gives golden experience as the road meanders through the gushing Sindh valley fringe on one side and snow covered mountain fence on the other side. God’s design of natural spots of beautiful scenery is unique when perceived from the places of the paradise, ‘Kashmir Valley’.

Kolhoi glacier, lying in the vicinity of Sonamarg is a wonderful vista in the hefty altitudes. Sonamarg is also the base camp for trekking several mountain peaks and the pilgrimage to the popular, sacred Amarnath cave starts from here.

Yet another majestic hill station in the lap of Kashmir Valley, Pahalgam welcomes its guests with all its glory. This tourist destination was once a popular spot for shooting Bollywood films, but now a health resort. Formerly known as ‘Valley of the Shepherd’, Pahalgam is a natural shower of pinewoods, green meadows and snow clad mountains along-with the center of attraction Lidder River. Trekking, golf-course, boating are the major amusements in this graceful wonder and its plain, low terrain is the ideal start for pilgrimage to Amarnath cave.

The ‘ice lingum’ formed in this cave surrounded by snowy mountains is regarded as the Shiv lingum by devout Hindus. The ice stalagmite is the result of freezing up of water drops that fall from the roof of the cave. According to legend, here’s where Lord Shiva explained the secret behind life and eternity to his consort, Parvati. Two other ice formations near the lingum are said to be Parvati and Lord Ganesha.

For a short period of time in summer, the cave is open to the pilgrims when snow subsides. This famous shrine is visited by lakhs of devotees by trekking from Pahalgam Valley.

This valley, a part of Pahalgam area is also visited by tourists to enjoy its natural glamour. The Valley got its name from the hit debut film ‘Betaab’ of Sunny Deol and Amrita Singh. En route Amarnath Temple Yatra, Betaab Valley offers delightful views of crystal clear waters of the stream bubbling down the snowy hills. Lakes nearby also add to its charm, a whopping bonus to Pahalgam.

About 12 km from Pahalgam, this scenic, green meadows valley dazzles the wayfarer. It is a base camp for trekking to the Kolhoi glacier and Tarsar Lake. Several lakes surround Aru Valley fringed with pinewoods and mountain peaks. During winter, Aru receives heavy snowfall and becomes the practicing center for skiing and heliskiing.

How can I cajole your striking beauty?

Who showered these showy hues and sheer spell upon you?

The unseen angel from the heaven or the surreal dream?

You always cheer me in my dreams

with the ethereal glamour you’ve;

My ever loving dreamy moments

in your jazzy lakes, gardens and snow beds. 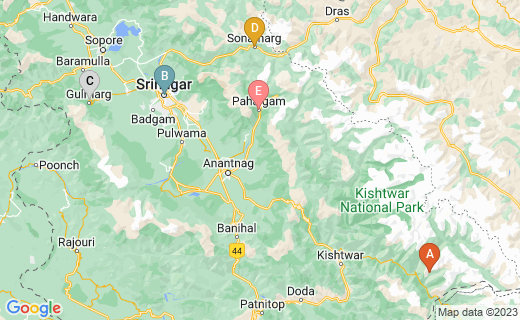