Malampuzha River, a tributary of the second longest river of Kerala Bharathapuzha, drifts across Palakkad watering its emerald paddy fields. It is this river that made Palakkad to be called “the rice bowl of Kerala”. Malampuzha, about 10km from Palakkad has a course under the Western Ghats where God arranges another scenic spot for the day-trippers. Because of the humidity and thickly inhabited masses, natural beauty of Malampuzha is a little bit touched; but the continued endeavors of Tourism Department has made this spot worth visiting.

I’ve picnicked to Malampuzha several times because of my aunt living in Palakkad. My cousin brothers too loved for a hideout from the busy, noisy life and they used to take us there. Filled with many manmade amusements, Malampuzha is always ‘old is gold’.

The fresh water aquarium situated near the garden itself looks like a fish. Its wide opened mouth is the entrance through which we can enter where a big hall hosts plenty of fishes of varied species. Watching the movement of fishes of various sizes and colors is awesome and amusing.

Snake Park in Malampuzha houses a big set of snakes of various habitats. It is a rescue and rehabilitation center where injured and abandoned snakes are raised with much care. Python, King cobra, Viper and a lot more snakes are protected here. Tree snakes perching on top of small trees fenced all around make a wild view. Different varieties of snakes are exhibited in cages from small size to large labeled with clean description. Malampuzha Snake Park is a great resource for those who are interested in knowing more about snakes.

This largest reservoir of Kerala, Malampuzha, runs through the foothills of Western Ghats. The panoramic view of this reservoir running under the hills is photogenic and it is another outflowing stream in the verdant land of Kerala. There is a network of two canal systems that irrigate the farm lands of Palakkad.

The big, spacious garden of Malampuzha amuses its guests with several cut-shaped columns containing velvet lawns, manicured ornamenting plants and dazzling flowers of bright colors. The numerous pathways constructed in the garden take the visitors to these handmade sights beside the dam. A canal crosses the center of the garden on the top of which two hanging bridges have been built. Walking through this bridge is another entertainment for those adventurers that swing a little on the air above water. A children’s park is also built in the garden that cheers children of all ages.

The central attraction of the garden is the Ropeway that gives a 20min aerial ride across the garden and across the canal. This tour stamps an overall sketch of Malampuzha on the wayfarer’s mind to cherish.

Being the first of its kind in South India, Malampuzha Rock Garden is a typical manifestation of artistry using recycled materials. Maintained by the District Tourism Promotion Council, this garden enchants the eyes of art lovers with elegant built sculptures and wall pictures using waste pieces of tiles, granite, stones, shells, fuse carriers, power insulators and broken bangles along-with a basic combination of rocks and concrete mixtures. This garden is situated at a distance of 800 meters from Malampuzha dam.

Sprawling over a vast area of land, Malampuzha entertains its guests like an all-rounder of exemplary skills.

Have you visited Malampuzha? If yes, do you like it? 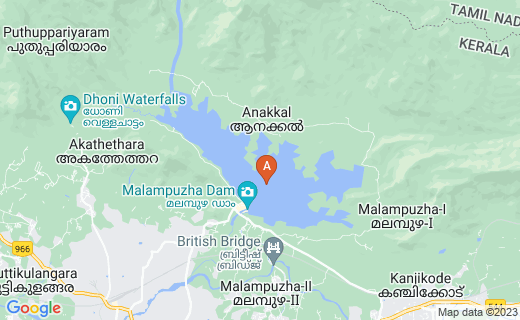