A Most Colorful & Unique Subtropical Island

An Introduction and Background

Fondly known as the “Conch Republic” by locals, Key West is for those who appreciate unique things and people, and who love the busier side of island life. Learn more about this fascinating place whether or not you plan to visit.

2 x 4…A small island, literally. Key West is only two miles wide by four miles long. Measuring its irregular shape on a chart, its land mass is approximately 5 square miles. The last census recorded just over 24,000 residents. 24,000 people crammed on 5 square miles is pretty impressive. Note that not all locals are full time and many leave for the summer season.

An eerie early history. Before the period of Spanish exploration, the island was used as a huge cemetery. Ponce de Leon bumped into Key West in 1521 and noted the place was littered with the bones of Florida’s indigenous people. The Spanish named the island “Cayo Hueso” or Island of Bones.

Diverse culture and history. In recent history, many Bahamian families immigrated to Key West to seek economic opportunity in the early 1800s. Green Turtle Cay, Abaco, Bahamas, is a sister city to Key West and these two locales share close ties. Around the same time period, Cubans were migrating to Key West. They brought their skills and opened the first cigar making factory in the early 1830s. Key West soon became world renowned for its cigars. There is also a strong military history here and today the area’s naval base trains SEALS. Locals often get to watch these rugged recruits parachuting into the water, rappelling from helicopters, and diving. Key West’s growth was also influenced by fishermen, spongers, wreckers who salvaged ships, and according to verbal stories, pirates.

There are Family and Kid Friendly Activities in Key West

What to do in Key West

Annual and daily festivals. There’s always something happening here. Sunset celebration on Mallory Square occurs every day about an hour before sunset. Vendors with handcrafted goods, food-drink stands, performers, magicians, and even psychics can be found. Annual festivals include the famous (or infamous?) Fantasy Fest at the end of October. Mardi Gras-like, it’s basically a week-long Halloween party for adults with a rambunctious parade at the end. Other events include Key West Pride in June, Mel Fisher Days in July, music festivals, numerous art festivals, and many more.

The Atlantic meets the Gulf of Mexico. The Florida Keys chain is wreathed in shimmering shades of turquoise, emerald, and deep cobalt hues. Getting out on the water is a must. There are boat rentals and numerous charter boats where you can dive, snorkel, fish, kayak, or learn to kite surf. To sink your toes in the sand, Smathers Beach stretches along Atlantic Boulevard along Key West’s south side. Fort Zackary Taylor, on the southwestern side, has a civil war era fort and is a state park with a sandy beach, concession stand and nature trails.

Historic places, island style. Old Town, Key West’s western half, is where it happens. The island treasures its rich history and takes pride in sharing it. There are guided tours of numerous historically significant places or you can set your own pace. The Hemingway House is an appealing museum occupied by numerous six-toed cats who are descendants of the famous writer’s own feline. The Key West lighthouse gives you a unique view of the island and the Audubon House showcases this famous illustrator’s work next to a lush tropical garden. Stroll through Old Town’s narrow streets and see the unique buildings, most dating from the period between the 1880s to the early 1900s. From the miniscule pastel hued cigar makers cottages to the wreckers elaborate mansions; it’s a walk back in time. There’s also a riot of tropical blooms, gnarled old trees, and exotic foliage in Old Town yards. Flowering trees often “snow” from above and patches of sidewalk will be coated in varicolored flowers or their petals.

Bars; drinking and social establishments like no other. It’s no surprise Key West has a high ratio of bars. It possesses an equally high ratio of churches. For novelty, you can get a cold one at the Smallest Bar Inn on Duval Street or drink with ghosts at Captain Tony’s under the uncountable bras dangling from the ceiling. The thick tree Capt. Tony’s is built around was once used as a hanging tree and supposedly the ghosts of its victims wander through the bar’s bathrooms. Key West’s oldest bar is the Green Parrot, and you can enjoy a waterfront view at the open air Schooner Wharf bar and grill where most of its structure was built out of old schooner and shrimp boat parts. Some bars are no longer in business, like the one that had bullet holes in the clock and provided “courtesy” cocaine to its patrons back in the days. The Key West Bait and Tackle Shop is a personal favorite, and many years ago it was just a few stools in a fishing gear shop with beers served out of a beat up old cooler. Here was the place to swap tall fishing tales.

Rich culture. The island boasts a wealth of creative types and you can stroll through numerous art galleries, enjoy live theater, or listen to bands play great music. Famous writers visit and stay to be inspired. Key West hosts innumerable art shows and related events throughout the year.

LGBT friendly. The drag shows on Duval Street’s southern end are fabulous. With a highly open-minded culture, the island is popular with the LGBT community. There are places to stay that cater to gay men and “Women Fest” is an established event lesbians enjoy participating in. There are a number of annual festivals geared for the LGBT visitor.

Mouthwatering Island Cuisine. The last time I counted, there were over 110 places to eat here. The most common flavors include fresh seafood, Cuban food, and Caribbean fusion. To get off the “tourist track,” popular local’s hangouts include El Siboney (Cuban), Goldman’s Bagel Deli (located midtown), Harpoon Harry’s (American), The Café (Vegetarian/Vegan), and Santiago’s Bodega (Tapas).

Haunted history with a touch of ghastliness. Key West claims it’s one of the most haunted cities in the U.S. With its start as a Native American burial ground, this is no surprise. The hanging tree in Capt. Tony’s is only one out of many haunted places in Key West. Whether or not spirits exist, there’s a number of walking or bus ride-type “ghost tours” you can participate in. These are great for history buffs. On the ghastly side, the island’s history gets to have the honor of including the necrophiliac nut job Carl Tanzler and his indecent activity with the decomposing corpse of a young woman. Other strange stories include a freakish possessed doll –which can be viewed on a ghost tour- and a mass grave of shipwrecked slaves that was once in the area of Smathers Beach.

Butterfly and Nature Conservatory. This is a peaceful dose of tropical forest where exotic butterflies and tiny birds freely flit around you. The most recent residents are two pink flamingos.

Museums. There are numerous museums to marvel at from Mel Fisher’s Maritime Heritage museum to the Curry Mansion and we even have a zany Ripley’s Believe it or Not.

Duval Street. The “main” street of Old Town. You haven’t been to Key West if you haven’t at least wandered down the famed Duval Street.

Helpful Things to Know Before You Go to Key West

When should I go? This depends on what activities you’re interested in and your temperature tolerance. Average temps in winter are 70-72F, and in summer 85F and higher with dense humidity. If you are here for underwater activity, the water is clearest and calmest in the summer. Off season hotel rates can also be found in the summer and the island is less crowded. Also see “weather planning” in this section.

Weather planning. This is a crap shoot when you travel to subtropical areas. Island weather can be unpredictable, especially in the summer season. The winter brings cold fronts that roar through, bringing rain squalls, high winds, and rough seas. In between cold fronts, it’s sunny and pleasant with low humidity. In the summer, winds are calmer and afternoon “pop up” thundershowers can form. It’ll be raining over one area of the island and dry a few blocks down. Hurricanes don’t arrive unexpectedly. Today’s weather satellites help forecasters plan and we are warned far in advance. Many visitors who wish to do weather dependent activities report that they prefer coming in the months of February to May. It’s the tail end of our “busy season” but not as hot at this time.

Where should I stay? Most people find it easiest to stay within walking distance of the Old Town area. Many hotels father away in New Town provide shuttle service to downtown. Depending on how much you want to spend, there are tiny, historic bed and breakfast places to fancy, modern hotels.

Is there crime? Like anywhere, there’s criminal activity, but harm against a tourist is very rare. Bike theft is amazingly high and the streets are full of con artists pretending to be nice in the attempt to take advantage of your kindness. There is a homeless problem here, but they’re only allowed to panhandle in certain areas. Keep a careful watch of your credit card statement after shopping or dining Duval Street.

Taxis? We have taxis, but you must call them on the phone. Most are on a schedule and don’t stop when hailed with a raised arm like in other cities. If you don’t have a phone with you, you can stop in any nearby establishment and if the person working there isn’t busy, he or she can call a taxi for you.

Tourist Information Booths. Finding one of these is the way to obtain maps with the locations of all the aforementioned places and more. The phone numbers for the taxis are listed as well as information for renting things like boats, bikes, or scooters.

Mohito. A rum drink made with mint.

Conch fritters. Made from the conch, a large mollusk. Its subtle flavor is difficult to describe and its texture is chewy-rubbery.

The Island of Key West 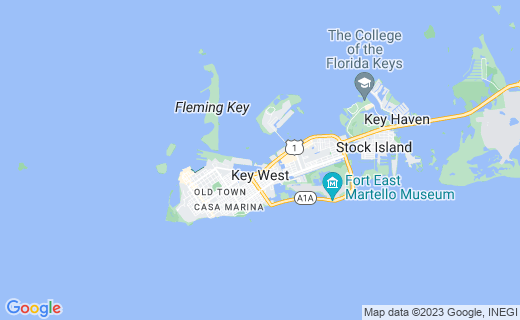 A Visual Tour of Key West