Things to Do in Kiev Ukraine

Just the mention of a former Soviet city evokes images of grim, grey and decaying buildings, large asphalted areas, Lenin statues and freezing cold temperatures. Oh and vodka, bears and balalaikas! If that’s what comes to your mind, you’ll be in for a surprise when you visit the capital of Ukraine – Kyiv, also commonly spelled Kiev.

Kyiv is a city full of natural beauty, golden domed churches, and beautiful architecture. Touristy musts include seeing mummified monks in caves overlooking the river, scoping out some souvenirs while going up the charming Andriyivsky uzviz hill to St. Andrew's Church, strolling down Khreshchatyk's main street with a draft beer in hand just like the locals, and maybe giving some chocolate-covered lard a try!

In 2012, Ukraine and Poland co-hosted UEFA EURO 2012. Five matches were held in Kyiv, including the final. Lots of tourists flocked to the city, especially for the closing ceremony before the match and the Cup Presentation Ceremony after the match.

Kiev-Pecherskaya Lavra, a UNESCO site is the most holy place in Ukraine and one of the holiest places for Orthodox-Christians in the world. It is actually a complex which includes several churches, museums, a monastery, a bell tower, a cathedral and catacombs. The complex was built back in 11th Century by monks and served as burial ground for the monks. To see the mummified monks at the Lavra, you must enter through a passageway at All Saints' Church or the Church of the Conception of St. Anna but before entering the cave, women have to be sure to wear a headscarf and a long skirt – but no worries if you don’t have these on hand like I didn’t because both can be rented by giving a monetary deposit which gets returned when you return the items. Going through the tight caves and seeing the monks is a spiritual and unique experience. Each monk’s body is covered in a cloth which is inside of a glass coffin and is annotated in Cyrillic. As people pass by certain monks, they kiss the coffin. Some parts of the cave walls have inscriptions and writings that according to my tour-guide was left by worshipers who made pilgrimages here throughout the millennium. Sadly though, most of the cave walls were painted a solid color during Soviet times.

Andriyivskyy Descent (A.K.A. "Andriyivskyy Uzviz") is a long cobble-stoned street connecting Kyiv's Uptown area with the Downtown area known as "Podil". It is sometimes referred to as the Montmartre of Kyiv. The cute street's sidewalk is lined with tourist shops/stands, art galleries and restaurants and at the top of the hill is a beautiful 18th Century baroque-style church, St. Andrew's. Legend has is that Andrew the Apostle visited the hill where St. Andrew's Church now stands, erected a cross there and prophesied the foundation of a great Christian city. Along Andriyivskyy Descent is also a building called the Caste of Richard Lionheart, there's the house-museum of the famous Russian writer, Mikhail Bulgakov and there's also a historic museum called One Street Museum.

An alternative and fun way to get from Kyiv's Uptown area to the Downtown area is via the funicular (cable car). The funicular was built back in 1905, takes just about two minutes and offers spectacular panoramic views of Kyiv and the Dnipro River.

Do you plan on traveling to Ukraine?

Khreshchatyk is the main street in Kyiv and is a popular hang out spot for both locals and tourists. The street is closed to traffic on weekends and music is played on loudspeakers so people walk around, stop by one of the many cafes and restaurants and go shopping. There's a beautiful underground shopping mall called "Globus" at Maidan Nezalezhnosti. Maidan Nezalezhnosti (Independence Square) is the main square in Kyiv and during the winter of 2004, it was the center of the peaceful protests that came to be called the "Orange Revolution". At one point, over a million Ukrainians protested at this square.

Parades and outdoor concerts are held on Khreshchatyk Street. Annual celebrations include Kyiv Day ((held on the last Sunday of May), Victory Day (held on May 9th), and Independence Day (held on August 24th).

Ok, so the mention of Eastern Europe conjures up images of vodka, bears, and balalaikas but chocolate-coated lard? Interestingly enough, pork fat or "salo" is a Ukrainian specialty and there is a cliché ethnic joke about Ukrainians feasting on slabs of pork fat so Ukrainians decided to take the joke to a whole new level - eating salo covered in chocolate. They call it the Ukrainian Snickers bar. I didn't get a chance to try this local treat but if you're brave enough to try it on your visit to Kyiv, you can do so at "Tsarskoye Selo" Restaurant for dessert. The restaurant which serves traditional Ukrainian food and is decorated like an old Ukrainian village is located near the Kiev-Pechersk Lavra and has a great website where you can find out all about it. 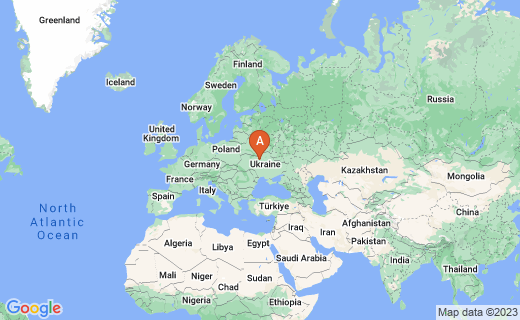