Klang Sentral , one of the hidden gems has yet to shine. KS has the potential to be Klang’s transportation hub.
Located just in front of Jalan Meru and surrounded by SP Setia crown project Setia Alam, award wining project Setia Eco Park, Mah Sing project Aman Perdana and Sime Property project Bandar Bukit Raja, KS can tap into the population growth of this area. There is no restriction on any legal business undertaking within this zone. A definite plus point for KS commercial centre. Accessibility is a breeze as KS is connected by various expressways. MacDonald’s 24hour which is located nearby, has opened its doors. Despite the above, KS still looks like a ghost town today. It may become a white elephant. Why?

Hence, the developer and bus terminal operator – NPO Development Sdn Bhd ( Titijaya Group ) needs to do more to attract traffic flow. They are already working with Commercial Vehicle Licensing Board (CVLB) and giving discount on rental. Are these actions sufficient? The answer is clear when you take a drive to KS.

Maybe all KS needs is time. It is estimated that North Klang area will have a vibrant population of 800,000 when the projects are completed. Give it 3-5 years and it will be bustling with activities.

Meanwhile, KS will have to rely on Titijaya Group to spearhead its success. In term of its past, recent completed and future projects, Titijaya is categorized as an upcoming major developer and they are able to deliver.

KS can also look forward to the opening of Giant Hypermarket in mid 2010. This may be the catalyst KS needs to boost its traffic flow.

For now... If the bus terminal is successful, then Klang Sentral will shine like a precious gem.

The shoplots opposite the bus terminal has begun to bloom, especially those nearer to Jalan Meru / McDonalds. No, I did not take my lunch in McDonald's (I can see crowd in the eat in section and a queue of 4 to 5 cars on the drive thru section). I ate in Klang Sentral cafe. They serve banana leaf rice (famous in brickfields). I think businesses will mushroom from this section rather than the bus terminal section. Giant hypermarket which opened its doors in August 2010 is just a stone throw away.

KLANG: Klang Sentral, the sprawling 83-acre bus terminal which had failed to draw visitors since its opening late 2008, appears to have been given a new lease of life from a most unexpected source.

OUTSTATION bus operators at the Klang Sentral bus terminal in Jalan Meru, which opened in December 2008, are still struggling with low volume of passengers and are upset with the station's management over the one-entry, one-exit system. 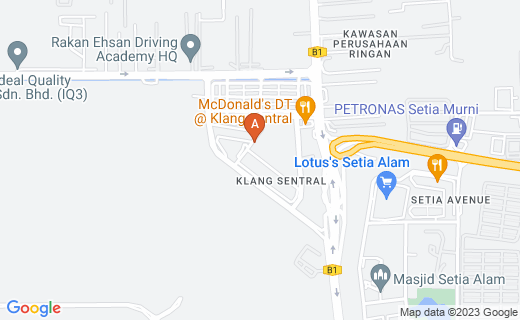 A Dose of Justice Served

I have almost lost faith in the Malaysian Judiciary System. This did not happen recently. It was built up over the years. However, the landmark ruling by the Federal Court on 21 January 2010 made me rethink the direction our Judiciary System is heading. This ruling will put a stop to illegal property transfers in the country.

Known as “Jewel of Kedah”, Pulau Langkawi is an archipelago of 104 islands of which 5 of these tiny islands can only be seen during low tide. These tropical islands are situated at the meeting point of the Straits of Malacca and the Andaman Sea.

Babies love to be touched and patted. Giving massage is a way of loving babies. And it is as easy as 123. I feel the sequence...