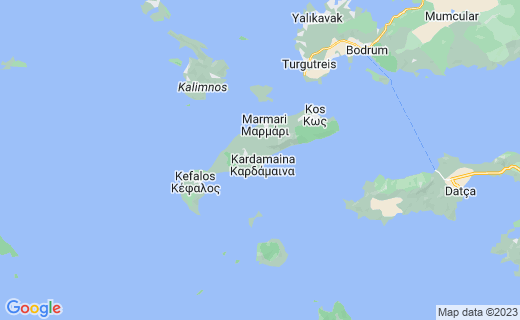 The island of Kos offers the discerning tourist a mix of beautiful beaches and modern hotel complexes and ancient Greek culture. Hippocrates, the father of medicine, was born and also taught in Kos town next to the famous Plane tree which still stands today.

Few would disagree that Kos Island, the third largest of the Dodecanese islands lying between Nisyros and Kalymnos ίn the south ­eastern Aegean Sea, is a charming place. It is close to the coasts of Asia Minor and the perfect area for holidays. Kos offers the traveler culture, decadence, sun, sea and relaxation. Upon arrival at the port, the rows of palm trees, the fort and the wonderful neoclassical and colonial-style buildings bring to mind the feeling of an exotic destination. It is the greenest and most fertile island of the group and the second most visited and popular island after cosmopolitan Rhodes. At first sight, you may feel a bit disappointed with Kos, seeing its many bars and huge hotel complexes lining the coast. However, as you tour the town and the island, with its archaeological sites, picturesque villages, excellent beaches and a general sense of ample space, you find that you starting to fall in love with a beautiful place that has quiet nooks and crannies to explore and appealing mountains to climb. The ubiquitous presence of bicycles all adds to the charm of Kos Island.

The Father of Medicine

But the idyllic and pastoral picture is mostly flat, as Kos also has a large farming sector which is occasionally maπed by instances where tourist develop­ment has taken the form of haphaz­ard and unsightly construction and bars competing to out blast their neighbours with music. It's unfortunate that isolated hotel complexes are now a more characteristic feature than villages or resorts, especially around KosTown, along the northern coast and around Kardamena. But the island is too big to seem overcrowded and there are many empty coastal areas to be enjoyed by those who prefer to get away from the holiday crowds. This combination of sand and sightseeing give Kos a uniquely broad appeal, though most visitors will probably prefer island beaches to Greek history. And, for an all in beach holiday Kos must be considered one of the best of the Greek islands. This may be seen as something of an anomaly when considering the islands record in the arts and trade since the second millennium BC, along with the fact that it was later the home of Ηίρ­pocrates the father of medicine. The Hippocratic Oath was born in Kos. Indeed a number of other prominent poets and philosophers also lived there.

A Bay in Kos

Island of many cultures

Nevertheless, its heritage prevails with a blend of ancient Greek, Ro­man, medieval, Muslim and Italian cultural elements that provide the background for a remarkable cosmopolitan setting. According to Greek mythology, Kos is the sacred land of Asclepiads, the god of healing. Archaeological finds prove that this island has been inhabited since prehistoric times. The Minoans settled on the island around the 14th century BC, followed by the Achaeans and, a few centuries later, the Dorians came and built the ancient city of Kos. The Persians conquered the island of Kos during the 5th century BC but were defeated by the Athenians who took control of the island during the battle of Salamina. 460 BC is the year during which Hippocrates, the father of Medicine and founder of the first School of Medicine, was born. After his death in 357, the inhabitants of Kos built the Asklepeion in his honor and in honor of the god Asklepios. It was used as a hospital, welcoming patients from all over the Mediterranean, with doctors who applied the therapeutic methods of Hippocrates. From the 4th century BC through to 1948 when Kos was united to the newly built Greek state, Kos Island has been overrun by the Romans, the Venetians, the Knights of St. John, the Turks, the Italians, and the Germans.

On arrival at the port you will see to the right of the port the im­posing and well-preserved Castle of Neranja built by the Κnights of St John in the 15th century. The castle overlooks the newly built marina, lined with attractive cafes and filled with sailing and motorboats of all shapes and sizes. If you walk over the bridge con­necting the castle with Lotzia Square, you will come to an ancient plane tree with a circumference of 14 meters in the shadow of which, according to legend, Hippocrates is said to have educated his pupils. Locals gather to em­brace the huge tree every year on September 1st as if to gain some of its longevity. South of the square is an area of Greek-Roman antiquities, such as the ancient gymnasium.

How to Get There and What to See

Getting to Kos Island by sea is a journey of some twelve hours from the port of Piraeus and of course you can take your car. Plane is much quicker and both Olympic Airlines and Aegean Airlines have daily flights. It is less than an hour from Athens to Kos International Airport. Once there are many fine hotels to choose from such as Kosta Palace Hotel, Imperial Hotel and for a family holiday the Kipriotis Hotel. Travelers are spoilt for choice when it comes to tavernas and restaurants. The best of the bunch being Platanos (Italian), Psaras (fish), Spitaki (gourmet), Serifis (Turkish), and Bia (Greek classic).Kos Island has many ancient sites and museums to visit. Must see places are Nerantzia (fort), the Kos Archaeological Museum, Asclepieon (ancient hospital), Antimachia Village (VenetianCastle) and of course Kos town itself.