Kovalam is a beach town along the Arabian Sea near the capital of Kerala, Trivandrum. It is by far the most developed and most popular beach in the state. A 10km drive from the heart of the city will take you to this coastal tourist hub which offers amusement ranging from sunbathing, swimming, herbal body toning massages, special cultural programs, catamaran cruising and a lot more. Even though the normal tourist season is from November to March, visitors throng the beaches of Kovalam all throughout the year.

The palm trees swaying in the gentle breeze at the back and the glittering ocean in the front form the perfect setting for a life at Kovalam. The beach becomes active late in the day once the intensity of the tropical sun has subsided. A massive rocky promontory has created a beautiful bay of calm waters along the coastal area ideal for sea bathing. Budget cottages, ayurvedic health resorts, convention facilities, shopping zones, swimming pools, yoga and ayurvedic massage centers add to the already existent natural flair of Kovalam making it one of the most visited beaches in the country.

The 17km coastline with intermittent rocky outcroppings forms three major beaches at Kovalam namely, the Lighthouse Beach, the Hawah Beach and the Samudra Beach. These three together comprise the famous crescent of the Kovalam beach. The sands of Kovalam are partially black in colour due to the presence of limonite and monazite. Ashoka beach is also part of Kovalam beach.

The biggest and busiest beach of Kovalam is the Lighthouse beach. It is called so because of the old 35m high Vizhinjam lighthouse atop the Kurumkal hillock. This beach is the southernmost of the Kovalam beaches and the one most frequented by tourists.

The Hawah beach (also called Eve’s Beach) is the second largest beach in Kovalam. It is also the second most busiest beach. The name came about because of the topless European women who used to throng the place during earlier times. The Hawah beach holds the recognition of the first topless beach in India even though topless bathing is currently banned.

The Samudra beach is a more secluded beach in the northern parts of Kovalam. It is separated from the southern side by a large promontory. There is an option to walk along the sea-wall to the north of Ashoka Beach to reach the Samudra beach. The shallow water for hundreds of metres about the coastline is ideal for those who are interested in swimming. The beach doesn’t normally have a lot of tourists and the main sights you see there are mostly of the local fisherman going about their daily lives.

Kovalam was among the most prominent tourist spots since the 1930’s. With the passage of time the beaches and the coastline of Kovalam have developed substantially and tuned itself to the demands of the thousands of tourists who visit these shores annually. The Vizhinjam seaport and the proposed Vizhinjam International Transshipment Terminal together could make Kovalam an economic powerhouse, if it is not one already.

The Captivating Village Life Of Kovalam

For International tourists the best way to get here is definitely by air. The Trivandrum International Airport is only a few kilometers away.

For natives, travelling by rail is also a good option since the nearest railway station (Trivandrum Central) is only 10km away. Buses are easily available from Thampanoor Bus Terminal (Busstop in front of the Railway Station) to Kovalam throughout the day and also well into the night.

In case you decide to explore the nearby places, take a short one day trip across Trivandrum. With places like Napier Museum, Sri Chitra Art Gallery, Padmanabhaswamy Temple, SMSM Institute, Ponmudi hillstation etc., you wouldn’t be the least disappointed.

Kovalam - On The Map 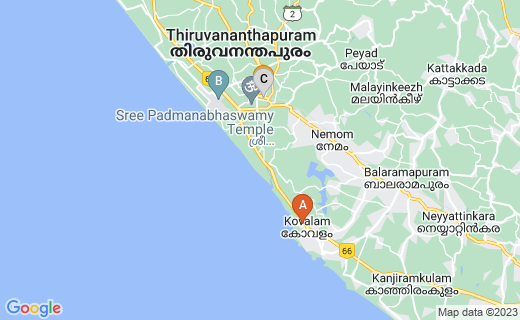