Geographic Center Of The United States

Lebanon Kansas has been considered the center of the contiguous United States (the lower 48) for over a century. In 1898 a government geodetic survey (A land survey with corrections made to account for the curvature of the earth's surface) determined that Smith County Kansas was the Heart of the Nation and this designation has grown ever since.

The tiny town of Lebanon boasts only 300 plus residents and the 1200 or more tourists that arrive and depart on a yearly basis. The town council determined to take full advantage of the area’s celebrity and in June 1941 a monument commemorating the spot was placed and unveiled. It proudly proclaims how the U.S. Geological Survey pinpointed Lebanon as America’s heart. Indeed the monument stands at a point where a plane of the lower 48 states would balance if the plane were uniform thickness.

But the real geographical center of the United States (contiguous 48) is about two miles northwest of Lebanon. The actual center is about a half mile away in the center of a former hog farm. The owner of the real golden spot, a farmer, had no wish for countless folk to trample his fields so he refused permission for the monument to be placed there. The organizers chose the closest available spot about one mile away.

Drama made local hearts beat faster and indignation rose fiercely when Alaska became a state and the new center of America was announced to be Bell Fourche, South Dakota. But the citizens of Lebanon were not giving up easily. They put forth the idea that since Alaska and Hawaii do not touch the continental lands, the term contiguous would save the area. (Contiguous means touching along a border or at a point (Merriam-Webster)

The actual location of Lebanon is:

There is not much to see and really not much to write about. Thence this article will be brief. However, if you are traveling along Highways 181 or 191 please stop at the junction of US-36/US-281. Take US Highway 281 north 1 mile, and turn west one mile on K-191 to the maker that has been erected at the end of the paved road.

Have your picture made beside the monument. Spend some tourist dollars and enjoy the breeze that blows across the Kansas plains. How many people can say they were the real Heart of America? A note of interest to single females, in the most recent census there are 102.4 males to every 100 females aged 18 and over. So a visit to Lebanon Kansas might just net you a husband as well as a great trip. It would be spectacular to marry in the Heart of America, having found your sweetheart there also. There is a tiny chapel there just ready and waiting to host a wedding.

These Lebanon, Kansas folk may be onto something! So pack a suitcase and let’s hit the road.

Lebanon Kansas-The Center Of The UnitedStates 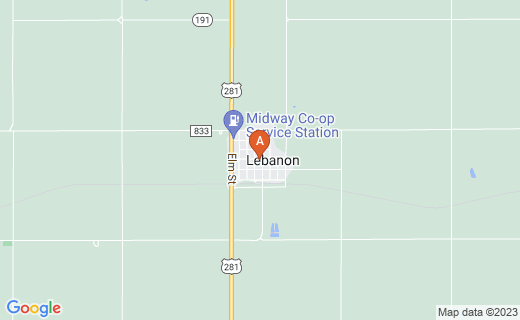